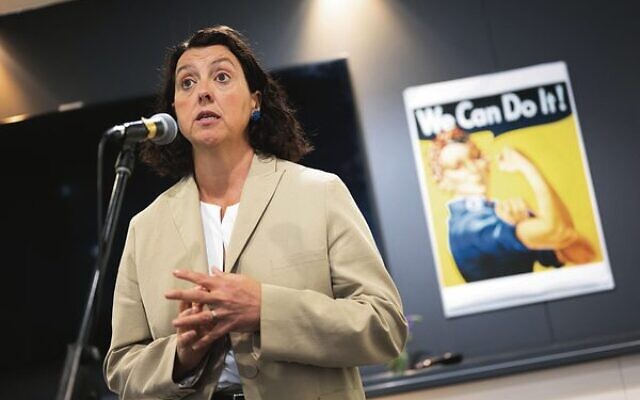 The born and raised Kooyong local elaborated, “I support the two-state solution for Israel and Palestine and the parties coming together constructively to negotiate a peaceful resolution.

“I am not convinced the BDS movement will achieve that aim and would be saddened to think another generation might grow up in conflict.”

The paediatric neurologist said, “As a doctor and as a mother, I could no longer ignore the Morrison government’s failure to take urgent action on climate change; its lack of commitment to creating a strong economy with investment, jobs and exports based on clean green energy; its lack of integrity, transparency and accountability, and its lack of leadership in the promotion of equality and respect for women.”

She said incumbent MP Josh Frydenberg “has voted the same way as National Party leader Barnaby Joyce on every important matter”, adding, “His actions do not reflect the values of Kooyong.”

Since announcing her candidacy, Ryan has met with members of the Jewish community “in both community forums and individually”, to hear their concerns.

“As the Member for Kooyong, I will seek their counsel on issues and legislation which they feel would impact on the Jewish community,” she said.

“I would also support more moves to highlight their legacy and history in Kooyong, Melbourne and Australia.”

Ryan said not being aligned to a political party means “I will be listening to the needs and values of my community and putting them first.”

“Voters want real action on climate change. Not just lip service like they have been getting from the Morrison government,” she said.

On combating antisemitism, she said, “Antisemitism is a form of hate speech,” and is abhorrent.

“I support measures that ensure recognition of antisemitism is consistent with Australia’s anti-discrimination and anti-racism laws.”