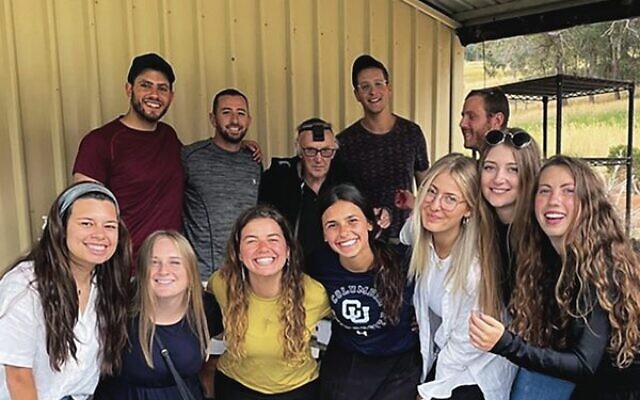 When a group of Israeli students helping out in the Perth Jewish community took the opportunity to go sightseeing in WA over the past fortnight, they didn’t realise they’d be taking their work with them.

More than 400 kilometres outside the state capital, in the tiny coastal town of Denmark – population 3000 – the members of Torah Mitzion stumbled across a berry farm.

A spot of fruit-picking seemed like a fun way to spend an afternoon, so after meeting the owner, 73-year-old James Lillywhite, they got stuck in.

In the course of explaining the different types of berries the Denmark Berry Farm grew, the conversation turned to Lillywhite’s background.

It emerged that he was born in a small town in Germany and arrived in Fremantle when he was just two years old.

He also revealed that his mother’s original surname had been Kleinberg, but that she had lived under a different name to escape persecution during World War II.

A little more digging revealed that his mother was actually Jewish, and even though he never realised it, so was he. 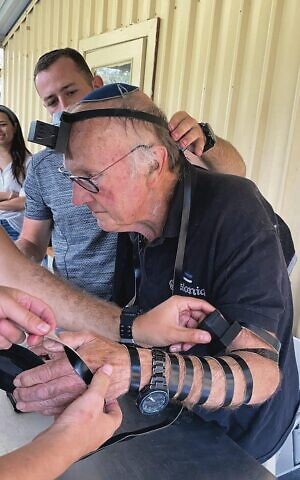 James Lillywhite putting on tefillin for the first time.

Moments later, he was being helped to put on tefillin, having no idea what they were, and recite the Shema.

Mitzvahs completed, amid cries of “Mazal tov”, singing and dancing ensued, with Lillywhite at the centre of his very first simcha.

The Torah Mitzion group have since told Chabad of RARA (Rural and Regional Australia) about their encounter and the organisation has now spoken with the Denmark Berry Farm proprietor.

Rabbi Menachem Aron reported that Lillywhite said it was the most exciting thing he’d done in a long time, stressing, “I’ve never done anything like that before!”

Speaking to The AJN this week, Rabbi Aron noted that James had said he “very much enjoyed the experience”.

He added that Chabad of RARA was planning to stay in touch with him and visit him, enabling him to continue his Jewish journey and learn more about his heritage.