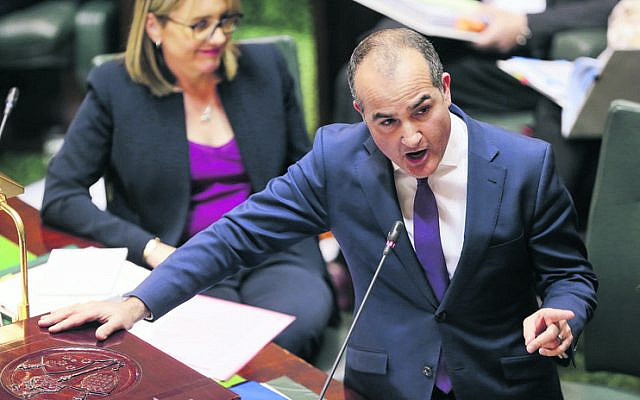 PARENTS of young Jewish students who suffered antisemitic bullying have been left “deeply disappointed” by a government review into the scourge, stating that “nothing addresses the actual application of safety plans in schools”.

The review, conducted by the Victorian Department of Education and Training (DET) at the request of Victorian Education Minister James Merlino, calls for, among other things, the creation of a dedicated contact desk for students and families to report antisemitic incidents, a collaborative effort with Jewish organisations to develop resources to teach students about the Holocaust and the establishment of an advisory group with representatives from Jewish groups. It also asks for an urgent review of protocols and practices in supporting schools to respond to any incidences of possible antisemitism.

“I don’t believe anything they have initiated would have made much of a difference to us. It is mainly aimed towards older students,” the mother of a five-year-old boy who was called “a worthless Jewish rodent” and subjected to antisemitic bullying at Hawthorn West Primary School told The AJN.

“It sounds great, but I’m not sure practically how it will work.

“Nothing addresses the knowledge gap for staff and educating them. Nothing addresses the actual application of safety plans in schools, or furthers support for junior teachers who are stressed with workloads and unable to closely supervise and monitor such situations,” she said.

The mother, and another parent whose 12-year-old son was forced to kiss the feet of a Muslim student while he was a student at Cheltenham Secondary College, were also incensed that Merlino didn’t keep his promise to fully include them in the process.

“We are deeply disappointed by the department’s handling of what has occurred. Communication has been delayed and incomplete, and we have been marginalised throughout the process,” said the parents of the five-year-old boy.

“Our biggest concern is that the report completely excludes the victims and in so doing fails to address antisemitism in a meaningful way.”

Quoting Merlino, they added, “Our children suffered because ‘the schools’ responses to reports of antisemitism fell short of community expectations’. He [our son] was not kept safe and we do not feel supported.”

The mother of the 12-year-old was shocked to find out that when she asked to view the report, she was told to apply to see it through the Freedom of Information Act.

“I put my faith and trust in our round-table meeting with James Merlino thinking that it was about our children, our families and the good we may be able to produce,” she said. “We were promised another meeting at the draft report stage and have been totally omitted from any further consultation or acknowledgement of our input for this report.”

Issuing his set of actions, Merlino reiterated his condemnation of antisemitism, conceding “the reported incidents of antisemitic abuse has shown that the schools’ responses to reports of antisemitism fell short of community expectations”.

Merlino said he has consulted with the Anti-Defamation Commission (ADC), the Jewish Community Council of Victoria (JCCV), the United Jewish Education Board, Zionism Victoria and the Zionist Federation of Australia over the past six weeks.

“I’ve taken their suggestions on board and … have developed a set of actions and reforms to ensure schools respond appropriately to reports of antisemitism, and that Jewish students and their families feel supported and safe in our public schools.”

He did not respond when The AJN asked why the parents were sidelined as the review progressed.

The recommendations by the DET came after both Caulfield MP David Southwick and Liberal MP for Kew Tim Smith went on the attack in State Parliament last week, urging Merlino to take action against antisemitism, three months after first raising the controversy of anti-Israel content appearing in material provided to schools.

Following the DET release of the set of actions on Tuesday, Southwick responded, “Today’s announcement makes no clear funding commitments or concrete steps to educate kids about the hurtful nature of bullying or address the underlying causes of antisemitism in our schools”.

He also accused the government of failing to “support the families most affected by these shocking incidents of antisemitism”.

ADC chairman and advocate for the families Dvir Abramovich said, “While I welcome some of the measures announced, particularly the adoption of the ADC’s call for a dedicated contact point for the reporting of racial and religious vilification, I am dismayed by the process which has dashed the families’ hopes for meaningful address to the horrific incidents, and has undermined their confidence in the Department of Education.”

Meanwhile, other Jewish communal leaders have favourably received Merlino’s actions, with JCCV president Jennifer Huppert stating they “will provide schools with tools to both combat antisemitic and other forms of racism in schools, as well as assisting schools in responding to these incidents if they do occur, and providing support to students and their families”.