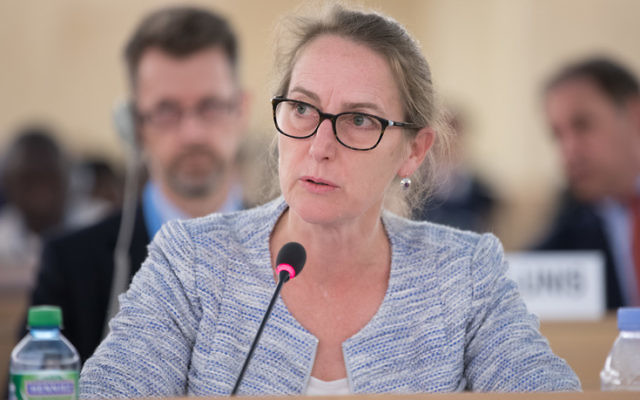 Australia and the United States were the only two countries to vote against the resolution last Friday, which passed with 29 votes in favour and 14 abstentions. The resolution condemned “the disproportionate and indiscriminate use of force by the Israeli occupying forces against Palestinian civilians, including in the context of peaceful protests, particularly in the Gaza Strip” and called for a commission of inquiry to investigate Israel alone.

It did not mention Hamas, despite the terror group’s role in organising the recent violence and the admission by Hamas political bureau member Salah Al-Bardawil that 50 of those killed were its militants.

Israel has said it will not cooperate with the investigation, with its UN ambassador Aviva Raz Shechter saying, “It is deplorable that this council, which pretends to be interested in the truth, turns a blind eye to the reality on the ground, and unjustifiably condemns Israel for protecting its population.”

“The UNHRC resolution prejudged the outcome of an inquiry into violations of international law in the context of large-scale civilian protests in the Palestinian Territories, including East Jerusalem.

“Nor did it refer to the role of Hamas in inciting violent ­protests.”

“The Foreign Minister was correct in rejecting the terms of the resolution which pre-empted the outcome of the inquiry, accusing Israel of ‘impunity’, ‘systematic failures’, and ‘intentionally targeting civilians’,” he said.

“The whole exercise is a polemical stunt to give the appearance of legitimacy and objectivity to blatantly one-sided political attacks on Israel.”

Australia/Israel & Jewish Affairs Council chairman Mark Leibler and executive director Colin Rubenstein said, “Australia can hold its head high as the only member state along with the US to oppose this biased and counterproductive resolution.
“The government promised not to support one-sided resolutions when it recently joined the council and we commend the government for keeping its promise,” they said.

Zionist Federation of Australia president Danny Lamm thanked the Australian government “for taking a stand and for protecting Israel’s right to defend itself and not being railroaded by an organisation that has a miserable track record on human rights and calling out human rights failures”.

But senior Labor frontbencher Anthony Albanese, appearing on the ABC’s Insiders, said, “The government needs to explain why it has opposed this independent investigation.

“International law requires a proportionate response and those people who have guns on one side and on the other side has rocks, the people with guns have a responsibility to act in a way that is proportionate,” he said.

In what appeared to be a gaffe, the shadow infrastructure minister also said, “The possibilities of a two-state solution are being undermined by the ongoing expansion of settlements on the West Bank and in Gaza.”

He later told The AJN the error “was an issue of language in a live television interview” and that he knows there are no settlements in Gaza.