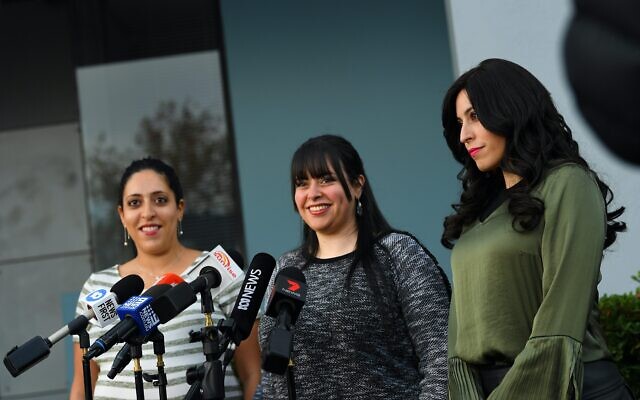 Alleged victims of Malka Leifer, sisters (from left) Elly Sapper, Dassi Erlich and Nicole Meyer speak to the media during a press conference in May following the Israeli court ruling that Leifer is mentally fit to be extradited to Australia. Photo: AAP Image/James Ross

IT was just after 5pm on Monday when the long-awaited news from the Jerusalem District Court filtered through to sisters Dassi Erlich, Nicole Meyer and Elly Sapper in Melbourne: Malka Leifer, their alleged sexual abuser and former principal of the Adass Israel School, had been ordered for extradition to Australia.

“We literally jumped for joy. It was an incredible moment to hear words that we almost never thought we would hear since 2011,” Meyer told The AJN.

“Nine years [we were] waiting [since lodging statements to police]. It’s still incredible to think about it now.”

Erlich added, “This is the day that we’ve been waiting for. It’s actually happened, and I just can’t stop smiling.”

Leifer fled to Israel when the allegations against her began to emerge in 2008. Six years ago, Australia filed an extradition request in an effort to see her return to face 74 counts of child sexual abuse. Since then, 72 court dates have followed, interspersed between bouts of feigned mental illness and claims of political interference.

In Monday’s decision, Judge Chana Lomp wrote, “I accept the petition and declare the respondent as extraditable to Australia for the offences attributed to her in the extradition request.

“Since I have determined that [Leifer] was not a resident of Israel at the time of the offences which are the subject of the petition, she is not entitled to the protection provided in Section 1A of the Extradition Law, that would have allowed her to carry out her sentence in Israel,” she said, noting that Leifer will remain in police custody until she is sent back to Australia.

Leifer’s lawyers have indicated their plans to appeal the extradition order to Israel’s Supreme Court – an avenue that is available to them for 30 days post-decision – with defence lawyer Nick Kaufman saying, “For those who think that this chapter is now closed, I’m sorry, the process will still last quite a few months more.”

Speaking on the prospect of appeal, Meyer said, “We do have faith that the Supreme Court will uphold the District Court’s decision and it is just a waiting game for us now,” adding that the sisters are hopeful the extradition will occur late this year or early 2021.

In the next procedural step, Justice Minister Avi Nissenkorn is required to sign off on the extradition. Signalling his intentions on Twitter, he wrote, “After years of torment, the [alleged] victims of the offence will finally be entitled to justice.

“Leifer [is accused of committing] a serious act and tried to impersonate a mentally ill person in order to evade extradition. I will work to expedite the continuation of the procedure as much as possible in order to carry out Leifer’s extradition to Australia.”

Yet, Kaufman was quoted in The Australian on Tuesday saying, “When the Justice Minister welcomes the decision of the District Court and announces prior to the appeal that he will do all in his power to speed up Malka Leifer’s extradition to Australia, then he is not, I submit, acting in accordance with accepted principles of administrative propriety.”

The article asserted an argument of Leifer’s defence that Prime Minister Benjamin Netanyahu made an “unlawful promise” to a visiting delegation of senior Australian political figures to speed the extradition – and the Justice Minister’s pledge to “work to expedite” the process reflects the “undue influence” of Netanyahu.

Meanwhile, a statement released by the Ministry of Justice on Monday read, “We are very pleased with the outcome of the court’s decision and look forward to the continued and successful cooperation between Israel and Australia.

BREAKING NEWS
LEIFER WILL BE EXTRADITED TO AUSTRALIA!!
(appeal is expected)
A victory for justice!!
A victory for all survivors!!
Exhaling years of holding our breath!
We truly value every person standing with us in our refusal to remain silent!
Today our hearts are smiling!

“Today is an important and significant day for the rule of law, for international cooperation and most importantly, for those who were [alleged] victims of Malka Leifer’s [alleged] crimes.”

Indeed for the sisters, the toll of the saga is not confined to the past, with Erlich sharing, “Every time there is a court hearing, our lives are turned upside down.

“As the case became more high profile, it meant a lot more media, and exposure, and that takes a lot of strength.

Added Meyer, “The mental health struggle is very real, particularly in the spaces that we don’t show on camera because that is more private.

“But we all draw strength from each other and from the wider network of people that continually support us.”

Meyer echoed, “The huge amount of support [we have received] cannot be diminished because that is a huge part of helping us keep going – and bring about justice for ourselves and for many survivors that really don’t have a voice.”