IN 1980, a group of parents with children at the Jewish preschool in Maroubra got together with communal leader Leslie Caplan to discuss a conundrum.

“He said, ‘What’s to stop you starting your own school?’ [and] that’s what we did with Mount Sinai,” Philippsohn recounted.

“We scratched our heads and looked around. And we had that fortunate situation that with the people in the room, we had a very good cross section of skills. We had a whole lot of the skillset that you need if you want to start a project like this.”

Following a demographic analysis, the fledgling committee negotiated a loan from JCA, before looking to put staff in place.

For a nominal fee, the school was able to use a room at the back of Maroubra Synagogue. 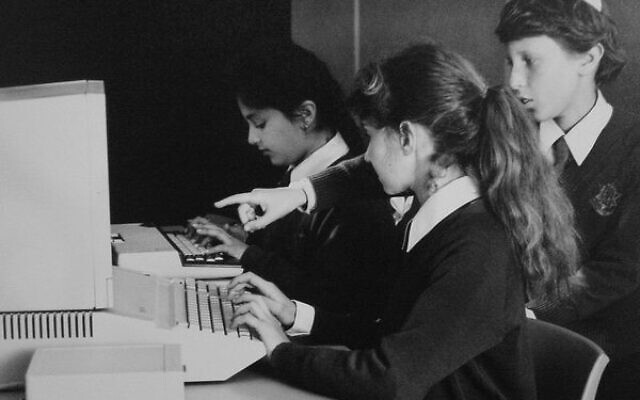 Students pictured working on
Apple IIe computers in the 1980s.

Since then, he said, he has “had the pleasure” of having had two daughters and three grandsons attend the school, one of whom is still a student there.

“When I walk in and look at what it’s become and the place it’s taken in the community, it gives me personally such a warm and satisfying feeling to know that we have contributed the Jewish continuity and the Jewish lives of so many families,” he said.

“It’s not just the kids. It’s the effect that when the kids come home and say, ‘Are we doing Kabbalat Shabbat on Friday night?’, the parent says ‘Well, you know, we put our kids in the school and this is what the kids are being taught. We should be doing it too’.”

He added, “I think the most important thing about the school is it has a sense of family. And it’s very personalised. Both the parents and the kids feel that they are part of a family.”

Harry Taibel was principal of the school from January 1990 to December 2002. He recalled joining the school at a time when it had 125 students housed in four demountable classrooms that were “leaking in winter and smelly in summer”.

“From being a little niche school, we went on to become a well-established primary school with all the facilities basically that they have today,” he said.

“When you look today at the school and you see the facilities and the school population, it certainly gives one a great sense of achievement and accomplishment.”

He attributed the school’s growth to the fact that “even when the school was basically housed in demountables … we always had top teachers, dedicated teachers”.

“If I reflect, that has been the success of the school,” he said.

“The teachers were dedicated, they were committed. They were involved in the school, they gave their very best to the school. And they became great ambassadors for the school.

“I also worked with young, eager and committed board members. We must not overlook their contribution because they were really amazing.”

Another aspect, he said, was the level of involvement of parents.

“The parent body was young, and they were enthusiastic. And they wanted to shape this dream as well,” he said. 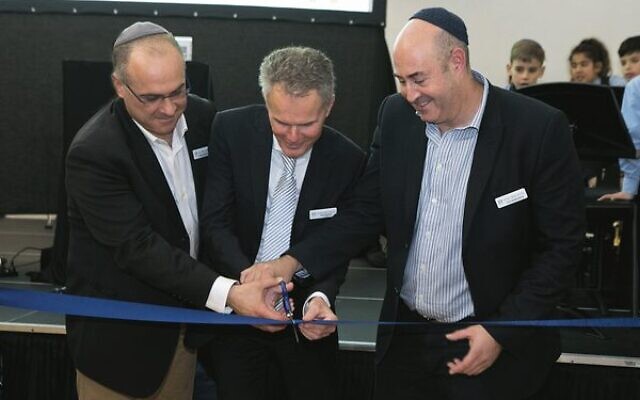 From left: President Anthony Berman, principal Phil Roberts and immediate past president Tim Greenstein cut the ribbon on the new and improved campus in 2019.

He recalled a time when the local council wanted the school to install a pipe at an “exorbitant” cost and parents came on a Sunday “with wheelbarrows and spades” to dig it themselves.

“There were picnics that we used to have for the parent body and the pupils on a Sunday. And they were well attended. It was quite amazing,” he added.

He noted that the school has a number of students whose parents are themselves alumni.

“We had many parents who did the rounds of all the schools. And at the end of the day, they always chose Mount Sinai because they saw something very special,” he said.

Taibel said he worked at a number of different schools in South Africa and Australia during his “extremely satisfying” career.

But, he said, “Mount Sinai was really the cherry on the top. It was a wonderful experience and a great way to end my career.”

Taibel’s successor, Phil Roberts, celebrated a milestone of his own two years ago, marking 30 years at the school.

“I think the most important thing about the school is it has a sense of family. And it’s very personalised. Both the parents and the kids feel that they are part of a family.”

“Mount Sinai is part of the Roberts DNA. You can’t take the school out of this guy,” he said.

“It’s defined me as much as I have defined the school. I think it’s really important to know how the culture, the people, and the environment has helped define who I am.”

He said marking Mount Sinai’s 40th anniversary “gives us a tremendous sense of pride, because we have built not just a school, but a community and culture around it”.

“It’s a credit to the quality of the people within the educators, the board of management, and everyone who has over the years invested so much time and energy to ensure the success of the school,” he said.

“There are certain long standing staff, people like Rosana Pleshet, Garron Forman and Janine Sussman. These are people who have been here over 20 years. Richard Prowse, who retired a few years ago, their contribution to the identity of this school is just immeasurable,” he added.

“And I’ve got to pay credit to previous presidents who have upheld the vision, and most importantly, had the trust in me and the educators to fulfil that vision.”

Looking at how the school has evolved, he said “the pace of change” had been tremendous. 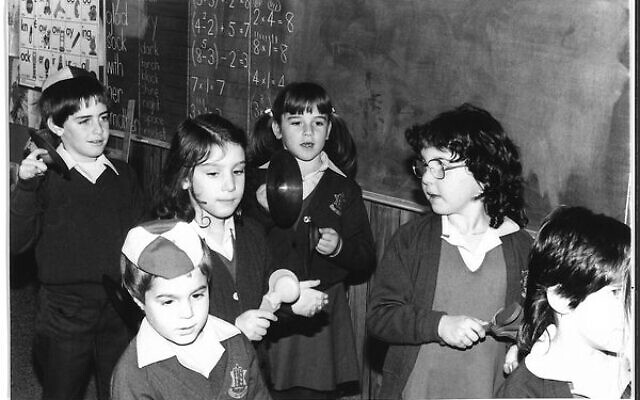 Students at Mount Sinai College in 1981.

“Neuroscience has had a huge impact on how education is understood and delivered. And I think that there are other changes in the education and our delivery. Our approach as a school, which is an Apple Distinguished School, has been a major milestone. And we’re proud of that,” he said.

“There are parents in this school now, many of whom I taught, who recognise the similar features, routines, traditions and customs that have flowed through the school. Yet on the other hand, the educational delivery is very different to what they experienced.”

With the school having recently undergone a renovation, Roberts said there are more works in the pipeline to deliver a new building that will see the early learning centre through to year six all together on the one site.

He added he remains “more optimistic than pessimistic” on the dream of one day expanding to also include a high school.

Reflecting on Roberts’ influence on the school’s development, president Anthony Berman described the long-term principal as “being front and centre”.

“I don’t think anyone can underestimate what a brilliant principal Phil Roberts has been,” he said.

“Whatever he’s put forward has always been research-based. And I think the success of the school has been the fact that he’s done that so well.” 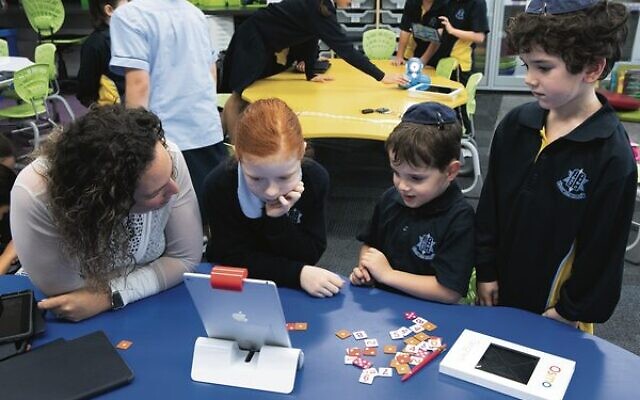 At the Apple Distinguished School, students work on iPads.

“He started it and to see that fruition after 40 years, he must be incredibly proud. Because it is an amazing achievement,” Berman said.

“I think we’ve managed to steer the school through difficult situations, good situations … it’s been a remarkable transformation of what it was to what it is today.”

And while he said “nobody really knows what the future holds”, he said the board’s approach is “steady as she goes”.

“We’re financially secure, we’ve managed our finances very tightly and we made sure that we’re not a burden on the community and have spent whatever money has been donated very judiciously, I think,” he said.

“Whatever we have done for the school has always been with the community in mind.

He added, “I think we think big, but we stay small. And I think that’s probably the success.”

He said the extended school family is excited to celebrate the milestone.

“Kids who are now in their 30s are coming to the celebration. So that’s testament to the fact that they still remember the school, [from] when they were in primary school at Mount Sinai,” he said.

“I think that’s probably what’s so special; it’s that thread that continues to run through generations.”

Thanking the community, he added, “Without community, you’ve got nothing. That’s the reality and we are one spoke in the wheel of what the community is. And I think it’s important to remember that.”