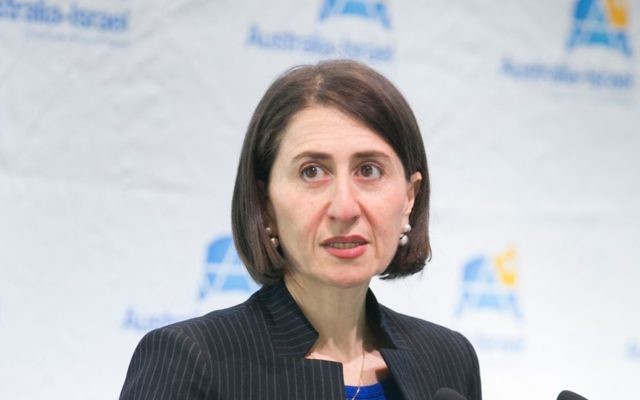 Gladys Berejiklian at an AICC event in June 2016.

She has a long history of involvement in the Jewish community: she has toured the Sydney Jewish Museum, addressed the NSW Jewish Board of Deputies’ (JBOD) Luncheon Club, and last June addressed the Australia-Israel Chamber of Commerce (AICC).

Congratulating Berejiklian on her election to the state’s top job, JBOD president Jeremy Spinak said, “Our community has enjoyed a long and warm relationship with Premier Berejiklian through her various roles as the Member for Willoughby, transport minister and then treasurer.

“Her election as Premier is great recognition after many years of service to New South Wales, and we look forward to working with her in her new role – and particularly to bringing about the vitally needed reform to Section 20D of the state’s race vilification legislation which we and other communities overwhelmingly support.”

Meanwhile, Spinak, who travelled to Israel last April with then-premier Baird during the latter’s trade mission, commended the retired MP for his achievements.

“Mike Baird brought great dignity to the office of premier. We thank him for his tremendous friendship towards the NSW Jewish community and for always being receptive to our issues and concerns,” Spinak said, adding, “His door was always open to our community.”

Pledging “I want to make NSW the ‘start-up state’,” Baird said Israel is “one of the world’s most innovative economies” and noted, “By creating a new corridor between Israel and ourselves – on issues such as cybersecurity, financial and medical technologies, and innovation – we can increase NSW’s competitiveness in the future digital economy.”

Spinak said seeing him representing the people of NSW at Yad Vashem was a “particularly moving moment and reflected his deep affinity with our community”.

“We express our thanks and wish him and Kerryn well as he closes this chapter of his life.”