Most people would remember where they were on Tuesday, September 11, 2001, as hijacked planes made impact with the Twin Towers in New York, the Pentagon in Washington DC and a field in Pennsylvania, following a passenger revolt on board.

Shortly after the attacks, the US Federal Aviation Administration shut down the airspace, forcing more than 4000 planes to divert to their nearest airport.

Gander International Airport, in Newfoundland – a small island off the far northeast coast of Canada – was told 18 planes would be landing. By 4.30 that afternoon, 38 appeared.

It would take until Sunday, September 16 at 6.20pm for the final passengers to depart.

Native Newfoundlanders refer to those not born on the island as ‘come from aways’. Over the course of the six days, Gander, which was home to approximately 10,000 people, cared for 6579 come from aways who arrived – passengers and crew who were weary, confused and terribly anxious about what was going on.

On the 10th anniversary of the terrorist attack, authors David Hein and Irene Sankoff travelled to Newfoundland to speak directly to the Gander community. Then, they wrote a musical – Come From Away – which tells 16,000 stories over the course of five days in a 100-minute timeframe using only 12 actors.

It’s something that associate director, Daniel Goldstein, says is unique.

“It’s a show that was really built from an ensemble,” he told The AJN from his home in the US, ahead of Australia’s new season. He goes on to describe how the ensemble make the magic happen – someone moves a chair, even though it’s not their chair, so another person can sit on it. A cast member brings on a hat and places it on someone else’s head, for it to be picked up and worn by a third character. “The staging is very much rooted in the kindness that the story espouses.”

The kindness that Goldstein refers to is, of course, the way the Newfoundlanders cared for those who had landed in their towns, with nothing except their carry-on luggage.

“The idea that Victoria had locked down for nearly 200 days so that we could be in a theatre was something that was terribly moving to me.”

Every character is inspired by real interviews that the writers had with real people. People who director Christopher Ashley describes as “incredibly warm, incredibly personable”.

For Goldstein, Come From Away is a beautiful story that resonates with people at different times in different ways. He joined the show after it opened in New York, in the northern summer of 2017. Goldstein himself described this time in his personal life as “tumultuous”, explaining that he took the show into his blood when he really needed it. “I look at other people watching it and understand that there’s something so beautiful about this show and the story coming to them at times in their life when they might really need that mana as well,” he said.

The musical, which premiered in Australia in Melbourne in July 2019, shows what can happen when people from all different countries and cultures come together to help each other out. And it’s something that is reflected in the production itself.

“There is no star, there is no one person who stands out among the 12. It’s really 12 actors, stepping up to the plate, and having their moment at bat, and then sitting back into the outfield to wait for the next play and support the rest of the team. And I think that’s really what makes the telling of the show so special and why it functions on so many levels.”

This is reiterated by writer Hein, who explained their process in a video on the Come From Away website.

“What we’re doing is we’re taking two groups of protagonists … and we’re showing how they were both changed and they both came together. That’s what makes us whole, is realising that it’s not ‘us and them’, it’s all of us.” And it really does portray an ‘all of us’ mentality. Even down to the Jewish character who is showcased. 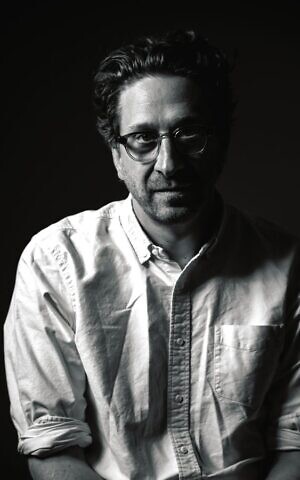 Goldstein, who describes himself as a cultural Jew (rather than a religious one), said the notion of different cultures and religions coming together is an important one.

“The ultimate tenet of all religions, at least the Western-based religions, is essentially do unto others. That is what Judaism is about, that is what Islam is about, that is what Christianity is about when it is practised with kindness and decency, as opposed to hatred,” Goldstein said. “Something that I try to practise in my daily life, that I think is what this rabbi is doing, is the notion of tikkun olam, specifically meaning to heal the world. I think what that rabbi is doing is, he’s trying to make the best of a situation.”

In Gander, Rabbi Leivi Sudak, who the character is based on, set up a kosher kitchen, he met a local Holocaust survivor Eddie who had never shared his story before, he put on a Shabbat dinner for those who wanted to attend. He cared and helped those around him, like every other passenger, crew member and Newfoundlander who found themselves in this unique and frightening situation.

In the current climate of rampant antisemitism, Goldstein believes showing the kindness of the rabbi is crucial.

“Antisemitism in the States is out of control, worse than I’ve ever experienced in my life. So I think that the more we have representations of just Jews in the world, the better it is.”

Goldstein also speaks incredibly highly of the Australian production – not just the cast and crew, but also the Australian public, saying everyone was so moved by the way the country banded together during the height of the pandemic, just so the world could get back to normal.

“We all felt that Australia, though harsh in the quarantine restrictions, was doing it right and that everyone was really caring for each other and buckling down and solving the crisis,” he said. “The idea that Victoria had locked down for nearly 200 days so that we could be in a theatre was something that was terribly moving to me.”

Goldstein referenced the invited dress rehearsal of Melbourne’s second Come From Away season, where he stood next to associate choreographer Richard Hinds to thank the community, sharing that it had been more than 300 days since any performance of the show had taken place, anywhere around the world. The pair said, “For 182 of those days, the people of Melbourne had lived through one of the toughest and longest lockdowns in the world … it is entirely because of your sacrifices that we are here today, thank you.” The pair compared the Melbourne community to the people in the very musical they were there to see, continuing, “your ability, like the Newfoundlandlers, to put others’ safety and needs in front of your own – your kindness to your neighbours and fellow Melburnians are an example to the world”.

And really, that kindness, compassion, and humanity is what this show is all about.

Come From Away is currently showing at HOTA, Gold Coast, before continuing to Melbourne in August and Sydney in November. For more information and tickets, visit comefromaway.com.au