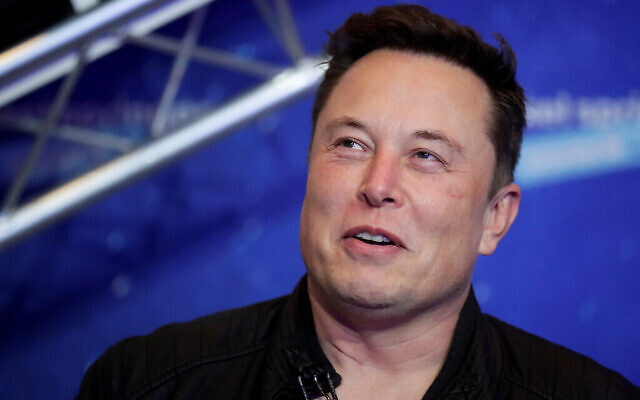 The news Monday that Elon Musk’s bid to buy Twitter had gone from what seemed like a joke to a $44 billion purchase agreement sent shockwaves across the global media landscape.

It is also raising the hopes and fears of users and critics who have long been distressed by the proliferation of hate speech, including antisemitism, on the social media platform — and by the company’s perceived lack of urgency in tackling the problem.

Musk’s acquisition will likely take months to complete and could be derailed in any number of ways. And while the entrepreneur is known for acting quickly and decisively — sometimes on matters far more petty than CEOs typically attend to — there’s no guarantee that he would make sweeping changes even if he does assume ownership.

Still, some Jewish users and advocates are hoping that a change in leadership at Twitter could shake up dynamics that many have decried — or at least not set back efforts that are already underway to tackle those dynamics.

The head of the Anti-Defamation League, which has publicly pressed Twitter to identify and flush out antisemitism on the platform, raised alarm in a tweet thread shortly after the news broke.

“Twitter has made some strides in tackling this hate in recent years,” the group’s CEO, Jonathan Greenblatt, tweeted on Monday. “So while we want to be cautiously optimistic about how @ElonMusk will run the platform, he hasn’t demonstrated any focus on these issues to date. We worry he could take things in a very different direction.”

Here’s what you need to know about Twitter’s Jewish history, Musk’s murky vision for the company and how Jewish groups hope he’ll change the platform.

Like all social media platforms, Twitter is filled with a mixture of good-faith users, bad actors and bots. But over the past decade, Twitter has seemed to deal with as many or more antisemitism controversies in the public eye than any other platform.

The topic exploded into public consciousness in 2016, amid the run-up to that year’s US presidential election. Jewish journalists became prime targets of bots that spread misinformation, and of antisemites emboldened by the rise of white supremacist groups that together made up a new movement known as the “alt right.”

Jonathan Weisman, a politics editor at The New York Times, called the abuse “omnipresent.” Jeffrey Goldberg, editor of The Atlantic, said the platform had become “a cesspool for antisemites, homophobes, and racists.” Reporter Julia Ioffe detailed how the antisemitism she was inundated with on Twitter translated into real death threats. 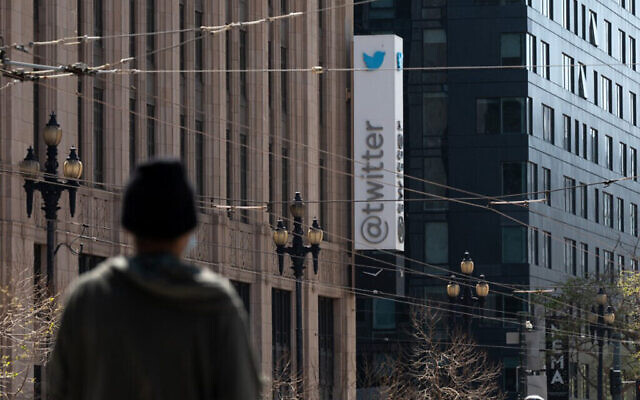 Antisemites began identifying prominent Jews online with what’s called an “echo” symbol, putting a group of three parentheses on either side of a person’s name. The echo was often highlighted on Twitter, and Jewish users eventually acted to reclaim the symbol and proudly trumpet their Jewish identities, voluntarily putting the parentheses around their names on their Twitter profiles. Weisman wrote a book with the symbol in the title: (((Semitism))): Being Jewish in America in the Age of Trump.

Twitter acknowledged the problem but did not solve it. In January 2018, the ADL — which eventually joined Twitter’s Trust and Safety Council and has developed an “Online Hate Index” tool to detect antisemitism on social media — estimated that over the previous year, more than 4 million antisemitic tweets were published in English alone, sent by over 3 million unique Twitter handles.

The company has also been dogged by widespread allegations that it doesn’t prioritise combating antisemitism and banning antisemitic users — or at least in a speedy enough fashion. In one example, from 2020, after the British rapper Wiley tweeted a series of antisemitic messages, a group of prominent British Jews and non-Jews boycotted the platform in protest of Twitter’s reaction time. Twitter “allowed [Wiley] 48 hours of pure race hate,” said actress Tracy-Ann Oberman.

At the same time, the platform has been a fertile space for Jewish ideas and conversation, even facilitating new areas of discussion between Jews and non-Jews and across Jewish denominations. Several rabbis have also found large audiences on Twitter, such as Danya Ruttenberg and Jill Jacobs.

But in the wake of the Musk news, Ruttenberg pointed her followers to her Substack email newsletter, in the event that Twitter’s new owner could exacerbate its issues.

“I can assure you that rampant antisemitic harassment already exists on Twitter — as does rampant racist harassment, transphobic, homophobic, sexist, ableist harassment and many intersections therein — and that Twitter already does an atrocious job of managing this, or taking significant threats to people seriously,” she told the Jewish Telegraphic Agency.

What we know about Musk and what he could do

His first name may sound like the Hebrew name Ilan, but that’s the extent of Musk’s personal Jewishness. He was raised in South Africa, where he attended an Anglican Sunday school, and moved to the United States to attend the University of Pennsylvania in the mid-1990s. From there, he began working in Silicon Valley, amassing wealth and influence as he developed a series of pioneering technology companies. He is the founder and CEO of Tesla, the electric car company, and of SpaceX, which has developed a range of spacecraft and other space travel tech. He has a net worth of over $240 billion and has been crowned the wealthiest person on earth.

In recent years, Musk has also become known as one of the internet’s most puzzling populist provocateurs. He supported the grassroots group of investors behind the Gamestop stock saga; became friends with fellow agitator Kanye West; and has become quick to troll any prominent detractors with anti-establishment rhetoric that can at times feel pulled straight out of a raucous Reddit thread. 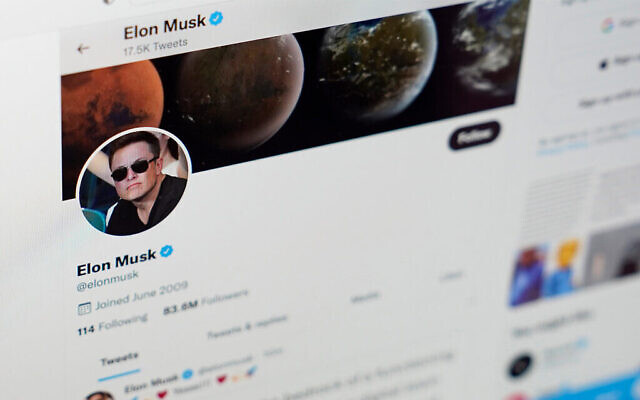 His politics have remained a mystery, but one of his big pet issues is clear: He is a staunch advocate of seemingly unfettered free speech. The specifics of what that means exactly, especially on Twitter, are yet to be seen.

Jack Dorsey, Twitter’s co-founder and former CEO, espoused a belief in absolute free speech that frequently collided with the company’s efforts to manage hate speech. It was not until late 2020 that Twitter said it would ban Holocaust denial, a decision it announced weeks after Facebook did the same thing.

“We strongly condemn antisemitism, and hateful conduct has absolutely no place on our service,” a Twitter spokesperson said in a statement at the time. “We also have a robust ‘glorification of violence’ policy in place and take action against content that glorifies or praises historical acts of violence and genocide, including the Holocaust.”

Musk sees Twitter as a stand-in for a vanished public square, where people with differing perspectives and ideologies can engage in open conversation. As some vowed to leave Twitter over his purchase, he said he wished they would stick around.

“I hope that even my worst critics remain on Twitter, because that is what free speech means,” Musk tweeted on Monday.

Musk has offered few details, and in fact suggested that he doesn’t have a crystal-clear vision for some of the company’s most vexing questions, including how to handle tweets that some say are hateful.

“If it’s a gray area, I would say let the tweet exist,” he said earlier this month. “But obviously in a case where there’s perhaps a lot of controversy, you’re not necessarily going to promote that tweet. I’m not saying I have all the answers here.”

Greenblatt acknowledged Musk’s framing of social media as a public square — but he lamented the consistent consolidation of its owners.

“It strikes me as deeply troubling & potentially dangerous that 2 people — Musk & Mark Zuckerberg — essentially control the public square. Seems like a sad day for democracy,” Greenblatt tweeted on Monday.

What Jews want to see

Jewish groups are already clamoring to convey to Musk what they would like to see him change on the platform.

The Council of European Rabbis issued a statement calling for Twitter to adopt the International Holocaust Remembrance Alliance’s definition of antisemitism — which has drawn its own scrutiny — for use in its content moderation.

“A quick win and a clear break from the past would be the adoption of the International Holocaust Remembrance Alliance’s working definition of antisemitism, used by governments and police forces around the word,” the group said. “The adoption of the definition, alongside its rigorous enforcement, will go a long way to making Twitter all that it can be.”

Some of the definition’s examples of antisemitism include certain criticisms of Israel, including ones that call the Jewish state a racist endeavor. Critics say it shuts down parts of free speech.

“We believe it’s important for everyone to hear from global leaders, and we have policies around world leaders,” Dorsey said in 2020. “We want to make sure we are respecting their right to speak and to publish what they need.”

Some believe efforts to police Twitter and other social media users has already gone too far, and that Musk could revitalize what they see as an overly censored space. Yossi Klein Halevi, a prominent American-Israeli author who often writes about Jewish-Muslim coexistence, argued in a tweet after Musk’s purchase announcement that “pro-Israel voices are arbitrarily removed” from Twitter and called on Musk to “level the playing field and let us debate” on Israel. He did not elaborate on why he believes pro-Israel activists are silenced.

Musk personally has not commented on Israeli politics or policy, even as he weighs in regularly on matters of public interest. His engagement with Israel appears to be limited; he climbed Masada and visited then-prime minister Benjamin Netanyahu at his home during a 2018 visit that Musk said was largely personal in nature.

Conservative columnist Jonathan Tobin, writing last week, argued that the ADL’s efforts to “squelch free speech” leads to a “slippery slope from censoring Nazis to shutting down any political speech or reporting that powerful people dislike.” He said conservatives are the “main targets” of social media crackdowns, citing how former US president Donald Trump and a Christian news site that mocked transgender people were kicked off of Twitter. Trump was removed after he whipped up his supporters, who then stormed the US capitol during the January 6 insurrection.

But most of the Jewish conversation aimed in Musk’s direction focused on his promise of unrestricted free speech, and the anxieties that the concept has unleashed in relation to hate speech.

Ruttenberg said, “I, as are many other people of more marginalised backgrounds than I, very — realistically, I think — am concerned that Musk will remove what few protections currently exist and make Twitter a place where harassment, abuse and possibly even doxxing is rampant and tolerated.”

And Greenblatt’s predecessor at the ADL, Abraham Foxman, tweeted a message for Musk.

“Unfettered speech is almost as dangerous as yelling fire in a crowded theatre! Jewish tradition teaches us that life and death is in the power of the tongue,” he wrote. “We must find balance between civility and freedom of speech.”