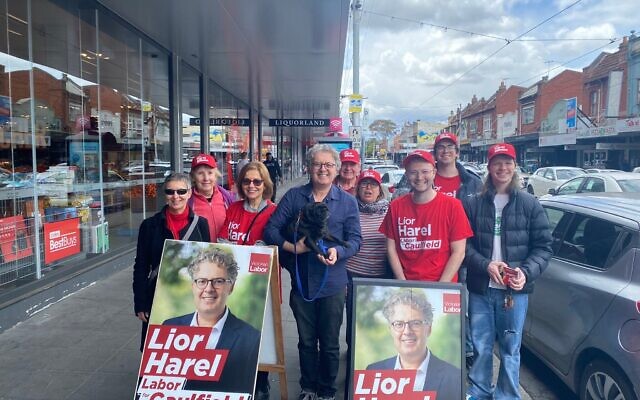 I’ve never had any ambition to be a politician. And I’m not really your typical Labor candidate. Sure, I was the president of a union – the Australasian Union of Jewish Students (AUJS). But that was over 20 years ago. Well before many of the young people powering my campaign were even born.

I’m the beneficiary of grandparents who fled war-torn Europe and built their future in Melbourne. And I’m the beneficiary of every opportunity that Australia has had to offer me and families like mine ever since. The opportunity to get the skills you need for the job you want. A strong health system, a world-class education system, and a fundamentally respectful community, where we aim to give every child the best start in life.

I graduated from Mount Scopus and then the University of Melbourne. I’ve spent the better part of two decades as a corporate lawyer – at Arnold Bloch Leibler and then SEEK.com.au. I’ve been lucky to work with some of the best minds in business. And I’m always grateful for the life I lead with Aimee, my wife, our two gorgeous sons, Remy (5) and Elijah (3), and our beloved pug King Solomon.

I know that good government can change lives for the better. That’s why I decided to put aside my career and run for Caulfield – I’m running because I cannot sit on the sidelines and see the achievements of this government put at risk.

As a proud Jewish community with largely bipartisan support from the major parties, we are fortunate that this election is not a choice between which party is better for us.

No one could possibly deny the support and friendship the Premier shows the Jewish community. This government banned the swastika. It introduced compulsory Holocaust education in our schools, and adopted the IHRA definition of antisemitism.

It opened Australia’s first ever state government trade and investment office in Israel, and has provided strong funding for security and independent schools, including Jewish schools. It committed $5 million towards the establishment of the Jewish Arts Quarter.

This government tackles antisemitism and hatred head on. And it does so side by side with the leadership of our community.

But that’s not the main reason I’m asking you to elect me as the first Labor MP in Caulfield’s history.

No one could possibly deny that this government has achieved big things, things that matter. No one could deny that the Premier is a strong, decisive leader with an impressive record of delivery and a plan for the future.

Early on in my campaign I gave a dvar Torah for parashat Re’eh, when Moses instructs bnei Yisrael to never close their hands to the less fortunate. We’re to open our hands – patoach tiftach.

This strikes me as the primary job of government – to help people, especially those less fortunate, to live their best lives.

That’s exactly what Labor stands for and what we deliver. Whether it’s removing level crossings – including Glen Huntly and Neerim Roads – or upgrading and building schools or hospitals.

Whether it’s making TAFE and kinder free, or upgrading roads and building new train lines, like the transformative Suburban Rail Airport Line, which will connect Caulfield directly to the airport.

And just as important to me, we’re leading the nation, by building up a government-owned energy company to invest in cheaper and cleaner energy, taking the climate crisis seriously.

This is a record and a plan of substance, of vision.

Elections have consequences. And I simply do not believe Matthew Guy and the Liberals are up to running our state. At a time when our state needs to invest in the services and infrastructure that matters, they want to walk away from them. But more than that – their vision is wrong for Victoria, and doesn’t align with the values of Caulfield’s modern, sophisticated community. As planning minister, Matthew Guy banned wind farms, effectively banning investment in renewable energy. And the last Victorian Liberals campaign was as nasty as any campaign I’ve seen.

The incumbent for Caulfield has worked diligently for the Jewish community. No question. But that’s not what this election is about. This election, the choice is clear. I’m asking you to elect me because this is a choice between one of the most transformative governments in our state’s history, and one of the most uninspiring and incapable oppositions.

Caulfield is held by a handful of votes. And it has a chance to be represented for the first time in a Labor government. A government that does what matters.

The task ahead for me is difficult. Labor has never held Caulfield. But the prospect of better reflecting the views and values of its people, and giving the younger generation a chance at living their best lives, makes the task absolutely necessary.

Lior Harel is the Labor candidate for Caulfield in the upcoming state election.