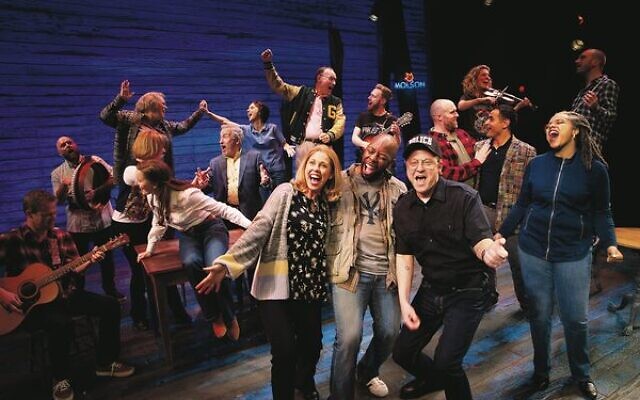 Death of a Salesman

Sydney Theatre Company is opening its doors once again, returning to the stage with two productions. Jewish American playwright, essayist and screenwriter Arthur Miller’s Death of a Salesman will wrap up the 2021 season, featuring Moriah College graduate David Fleischer as set designer.

After an incredibly tough year, Sydney Theatre Company is delighted to be returning to the stage. An extraordinary ensemble will bring Miller’s classic to life, as audiences follow Willy Loman lost in the wilderness of modern life as a travelling salesman, while his family desperately try to figure out their own lives.

Death of a Salesman runs from December 3-22. Bookings: sydneytheatre.com.au/whats-on/productions/2021/death-of-a-salesman

On September 11, 2011, the world stood still as terrorists attacked the United States. More than 4000 planes already in the air were diverted to their nearest airports as countries around the world cleared the airspace.

Thirty-eight planes were diverted to Newfoundland, an island off the far northeast cost of Canada, landing in the town of Gander. Suddenly, the small town with a population of just under 12,000, was inundated with thousands of people who needed a place to stay.

Rabbi Leivi Sudak, a Chabad rabbi from London who was on his way home after visiting New York, was on one of those flights, setting up a kosher kitchen to cater for some of the stranded passengers who were Jewish.

Incredibly, Come From Away tells more than 16,000 stories in a 100-minute musical using 12 actors.

Come From Away reopened at Sydney’s Capitol Theatre this week. Bookings: comefromaway.com.au/tickets/sydney

While the new gallery space for feature exhibitions remains under construction, the Sydney Jewish Museum is reopening to visitors on November 22.

All areas of the permanent exhibition space will be open as well as an exhibition titled The Unknown Paintings of Fred Zeckendorf, depicting the people and daily life of the Theresienstadt ghetto from 1942 to 1944. Fred and his son Otto were deported to Auschwitz where Fred was murdered on arrival. Otto migrated to Australia with his mother with only a little money and his father’s artwork. More than 30 of these are on display.

Purchase tickets for entry into the museum at sydneyjewishmuseum.com.au/shop/entry-vouchers/tickets

Due to the global pandemic, Shiva Baby premiered online at the 2020 South by Southwest film festival with the first public screenings taking place at the Toronto Film Festival.

The film focuses on Danielle who attends shiva with her family, taking place almost entirely in real time and most of it is in one location – the shiva residence – as Danielle grapples with being in the same room as her ex-girlfriend, a man she has been seeing and his wife, her parents and other members of the tight-knit Jewish community. Shiva Baby has been applauded for being accessible for all audiences, regardless of sexual orientation, religion or gender.