Comic books and superheroes have a cult status. Perhaps it’s the desire to emulate them or perhaps it’s falling into a fantasy world where there’s someone out there always protecting us from the bad guys. Whatever the reason, their popularity is unparalleled.

The fascination around comics stems as far back as the golden age of comic books – the late 1930s to the early 1950s – when they were first published and quickly found fame.

Many were created by Jews who had been forced out of work from American newspapers due to antisemitic quotas.

As MAD magazine cartoonist Al Jaffee has said in the past, “we couldn’t get into newspaper strips or advertising; ad agencies wouldn’t hire a Jew. One of the reasons we Jews drifted into the comic book business is that most of the comic book publishers were Jewish. So there was no discrimination there.”

Superman was created by Jerry Siegel and Joe Shuster, Captain America by Joe Simon and Jack Kirby, Bob Kane and Bill Finger are responsible for Batman, and Kirby, together with Stan Lee, created some of the most impressive superheroes of them all – Spider-Man, The Hulk, the Fantastic Four, Ironman, the X-Men, Thor and the Avengers.

Today these superheroes are topping the box office charts time and time again. In 2019, before COVID-19 disrupted much of the industry, Avengers: Endgame raked in more than $2.7 billion worldwide.

Now, Whistle is joining the DC ranks as the next Jewish superhero – their first in more than 40 years.

She joins the likes of the Green Lantern, Harley Quinn, Batwoman, Cyborg and Alice Cohen and The Monolith. Fun fact, there is even commentary around the fact that Batman’s mum was Jewish, making the Dark Knight Jewish too.

One of the reasons we Jews drifted into the comic book business is that most of the comic book publishers were Jewish. So there was no discrimination there

Willow Zimmerman is a 16-year-old Jewish social activist. She has curly hair, loves a good Reuben sandwich and has a dog named Lebowitz.

The story centres on how Willow copes when she finds out her mum can no longer undergo treatment for cancer because of the high cost. She finds a job with her mum’s friend, the income from which helps keep her family afloat and covers the critical medical treatment. But the job isn’t all that it seems.

For Whistle author E Lockhart, it’s the superhero’s ability to relate to everyone that makes her so appealing.

Willow also represents the superheroes who walk among us in everyday life – young adults who are searching for ways to make the world a better place, some of whom do so through a Jewish lens.

“Whistle is a hero like me. Like you, maybe. She’s an ordinary person who sees what’s wrong in her city and feels powerless to right it – until she isn’t,” Lockhart told Jewish culture website Alma.

“Whistle is a social activist, a secular Jewish person and a teenage girl working to support her mother through sickness – all elements I haven’t seen so much in superhero comics. The story explores the dark, ethically-compromised side of a superhero’s life as well as the empowerment.”

In one panel, Willow visits a synagogue as she struggles with the two vastly different sides of being a superhero – the lure of riches and possible corruption verses the activism on behalf of her community. 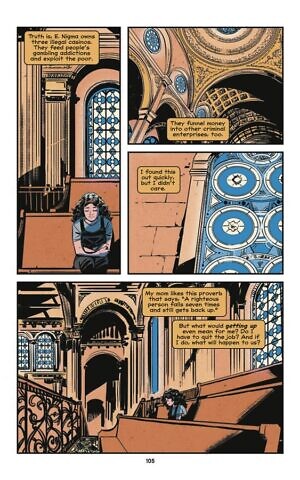 The comic is full of Jewish references with Willow embracing her Judaism. Lockhart has even created a Jewish home for Willow and her story.

“In order to make Gotham my own, I invented a neighbourhood called Down River. It’s a formerly all-Jewish neighbourhood like New York City’s Lower East Side, now home to a wider range of people, but still holding onto a lot of its Jewish history and culture,” said Lockhart.

There are stores such as Shelsky’s Bagels of Gotham and Rosen Brothers’ Delicatessen to make it even more authentic.

For Lockhart, Willow represents the Jewish tradition of interrogation. “The Jewish intellectual heritage is to question, to have dialogues, to not let a moral conversation be over, but instead to keep thinking about it, pondering it, having dialogues about it,” she told the Comic Book Resources website.

“So, I tried to create a hero for whom that was also true.”

Willow also represents the superheroes who walk among us in everyday life – young adults who are searching for ways to make the world a better place, some of whom do so through a Jewish lens.

“To me, you can wrap all of Judaism in one sentence, and that is, ‘do unto others’,” American comic book writer Stan Lee has been quoted as saying.

“All I tried to do in my stories was show that there’s some innate goodness in the human condition. And there’s always going to be evil; we should always be fighting evil.”

And now, one of the batons has been handed to Willow as she inspires the next generation of superheroes.