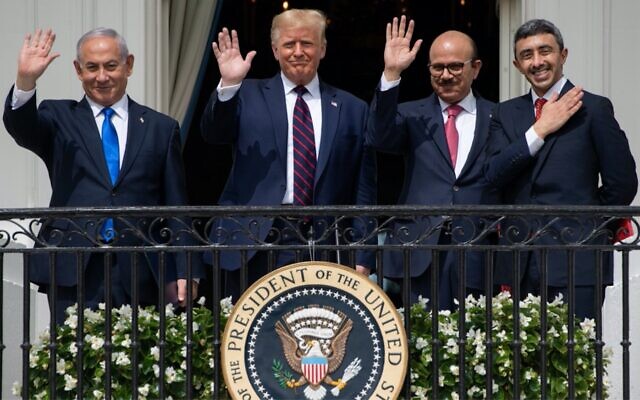 AT the risk of being a wet blanket, the Arab states lining up to make peace with Israel aren’t Zionists. They exude friendship toward Israel, but keep in mind that the United Arab Emirates and Bahrain have specific national interests. Peace with Israel advanced these, so they took that path.

In a way, the warmth of the Gulf peace has echoes with Egypt’s rapprochement with Israel. In 1977, Egyptian president Anwar Sadat stunned the world by announcing he was willing to go to Jerusalem to forge peace with Israel – and then did. The camaraderie he subsequently struck with Israeli prime minister Menachem Begin promised an era of friendship. Egyptian and Israeli soldiers injured in Sinai met and even embraced their former enemies.

But behind Sadat’s genuine warmth was realpolitik. Egypt was (and remains) a very poor country. Maintaining a war-footing with Israel was economically devastating, and the Soviet Union was a losing bet. The price of entering the US sphere of influence was always going to be peace with Israel, and Sadat was happy to pay.

But he also paid with his life. On the 1981 anniversary of the Yom Kippur War, Sadat and 10 others were gunned down by the Egyptian Islamic Jihad. Sadat’s successor, Hosni Mubarak (who was injured in the attack), got the message, and dialled the peace with Israel right down. He retained it, but only because doing so was necessary to maintain US assistance. (Since 1980, Egypt has received over $US70 billion from the US.)

Today, antisemitism in Egypt continues apace. Egypt is almost always a co-sponsor of the most viciously anti-Israel resolutions at the UN, and trade and cultural exchange between the two countries is at a bare minimum.

If the Egyptian peace started warm but grew cold, what is stopping the Gulf peace from doing the same?

First, regional sentiment has changed. In 1977, Israel was still seen as a colonial implant destined to be stamped out. Today, Israel’s permanency is widely acknowledged. In 1979, Egypt was suspended from the Arab League for 10 years. But earlier this month, when the Palestinians urged the Arab League to condemn (much less suspend) the UAE and Bahrain, it was the Palestinians slapped down instead.

Second, regional calculations have changed. In 1977, Iran wasn’t the Islamic Republic. But ever since 1979, it has never stopped trying to export its revolution. The tumultuous events of the last 20 years – including the rise and rise of Hezbollah; the overthrow of (Sunni) Saddam Hussein in Shia-majority Iraq; the Syrian and Yemeni civil wars; the revolution in digital communication; and the funds released by the Iran nuclear deal – have seen a dramatic increase in Iran’s maleficent abilities. Here, Israel has proven itself useful to the Gulf states, providing them with under-the-radar security cooperation and being (like the UAE) one of the few countries to directly take on Iran or its proxies.

Third, US commitment has changed. Both the Obama and Trump administrations have attempted to extricate America from the Middle East. The Arab world’s various dictators might not be human rights champions, but many are American partners, nonetheless. By abandoning Egypt’s Mubarak in the face of the Arab Spring (and signing the nuclear deal with Iran), Barack Obama caused America’s Arab partners to realise that American commitment to their security was no longer reliable. Donald Trump reversed the US policy on Iran, but his mercurial nature and explicit comments about allies having to defend themselves has continued the uncertainty.

There is a bitter irony that waning American commitment to the Middle East is a cause of improved Arab–Israel relations.

Fourth, the Gulf states never fought a war with Israel (or told its people it had won! When in Cairo for the Department of Foreign Affairs and Trade, I was driven past a museum and park complex commemorating the Egyptian victory in the Yom Kippur War!)

Egyptians never shared Sadat’s friendship with Israel. Egypt fought Israel to destroy it. Signing the peace agreement – especially before the Palestinian question was resolved – went against 30 years of indoctrination. But the Gulf states have a much shorter tree from which to climb down, and they’ve never had to bleed for the cause.

The Bahrainis and Emiratis successfully pivoted away from stale, inward-focused ideologies years ago. The glittering steel jungles rising from the sand speak to the success of this pivot. From LEGO theme parks and exhibitions, to Formula 1 grand prix, Bahrainis and Emiratis provide plenty of evidence that they welcome the world, rather than wallow in resentment of long-past colonial bondage.

Peace with Israel isn’t an embarrassment; it is celebrated. Witness the many Zoom conversations held between Israeli and Emirati commentators in recent weeks. Emirati hotels now offer kosher meals.

Unlike the Egyptians, who resigned themselves to Israel’s existence, the Gulf states are seeking to benefit from it. The recently signed agreements include articles on trade and investment, embassies, cultural exchange, direct flights, and cooperation in health and other areas of common interest. Israeli know-how in water preservation, reclamation and desalination is highly sought after, as is its technology and innovation investment environment.

Yes, Gulf countries are making peace with Israel because it’s in their interests to do so. But this peace is not begrudging. It is pursued on the basis of welcoming the Jewish State as one with a legitimate presence in the region. Maybe that makes the Gulf states Zionists after all.

Dr Bren Carlill is the director of public affairs at the Zionist Federation of Australia.