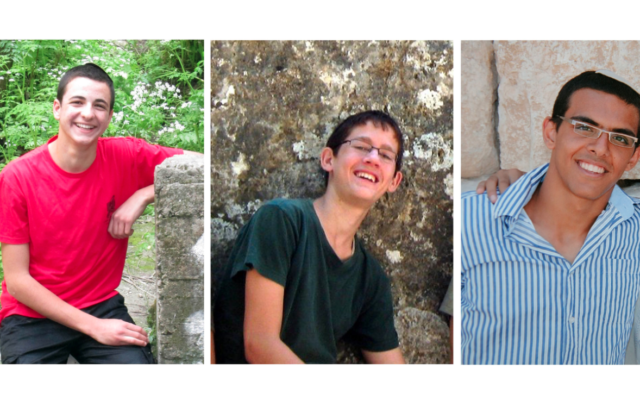 The prize is in honour of Gilad Shaar, Naftali Frenkel and and Eval Yifrach.

JERUSALEM – The search is on to find some of the world’s most inspirational Jewish students – and judges are hoping for a flood of nominations from Australia.

The first Jerusalem Unity Prize for Young Leadership will be awarded in Israel in June to a student or group of students embodying “the spirit of innovation and commitment to bridging gaps within the Jewish world”.

Talking to The AJN in Jerusalem, coordinator Gila Brill said she is confident that Australian campuses have lots of students deserving nominations, and urged members of the community to think about friends and relations who may be eligible. She commented: “There is so much inspiration to be seen in the Jewish community in Australia, so I will be thrilled to see as many applications as possible from this corner of the world.”

The student prize is part of the wider Jerusalem Unity Prize, which was launched last year to honour the memories of the three young Israelis who were kidnapped and killed by terrorists in 2014. It is awarded on “Unity Day”, when Jewish communities worldwide hold events focused on Jewish unity. The idea driving all of this, according to Brill, director of international initiatives at Jerusalem Unity Prize, is to recapture the sense of unity that engulfed the Jewish world during the days when Naftali Frenkel, Gilad Shaar and Eyal Yifrach were missing.

“This specific event brought almost a tangible feeling that these boys belonged to everyone, and that ‘hug’ that we felt from around the world, and we want to take the ability we saw to unite in tragedy and bring that to our day-to-day lives,” she said.

After last year’s inaugural awards ceremony, organisers felt that they needed to give special recognition to unity efforts of the young. This, and a desire to memorialise the unfulfilled potential of the deceased by rewarding efforts of other youngsters, led to the establishment of the student prize.

Brill said: “Eyal, who was older than the other two, would already be in the middle of his army service, thinking about the next step, so there’s definitely a message of unfulfilled potential, about what they could have become.”

She stressed that nominations do not need to be students working on a global level, but rather working locally in a way that can inspire Jewish people globally. “We don’t need to give the prize to someone having a direct effect on all continents – if someone is working in his or her immediate community and making a real change, that is something that deserves to be celebrated.”