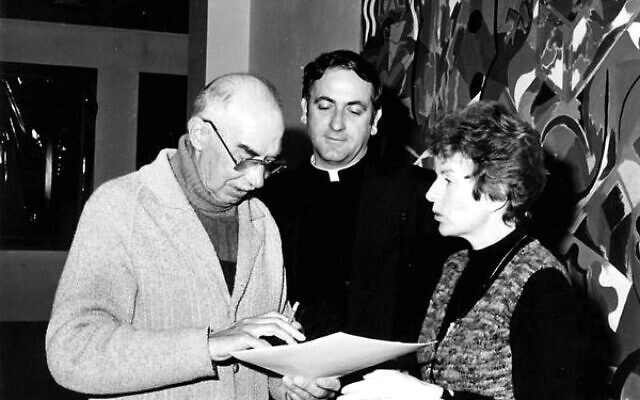 Representatives from the Sydney Jewish Museum (SJM)met with Wollongong Council this week to discuss the findings of Professor Konrad Kwiet’s report following confirmation that Bronius “Bob” Sredersas was a Nazi collaborator.

Kwiet, a Dutch Holocaust historian at the SJM, was tasked with investigating the past of Lithuanian immigrant Sredersas and submitted his report to Wollongong Council last week.

In it, Kwiet concluded that Sredersas was a Nazi collaborator during the German occupation of Lithuania and concealed his wartime service to present himself as a Lithuanian refugee, which allowed him to immigrate to Australia in 1950.

Kwiet wrote in his report that Sredersas was born in 1910 to “ethnic German parents” in the Crimean city of Simferopol and changed his name to Bronislaus Schroeders to successfully gain German citizenship.

He then served as an intelligence officer in the Nazi security service and was a collaborator. Lithuania’s Jewish community was decimated during the Holocaust, with 90 per cent murdered by the Nazis in close cooperation with Lithuanian collaborators.

In 1950 Germans and ethnic Germans were not permitted to enter Australia, but after the war Sredersas renounced his German citizenship and was classified by the International Refugee Organisation as a political refugee eligible for rehabilitation, maintenance and resettlement.

Sredersas settled in Wollongong where he worked in the city’s steelworks, but regularly travelled to Sydney and used his money to amass an extraordinary collection of Australian fine art.

Unmarried and with no children, he bequeathed his entire collection of around 100 works to the Wollongong Art Gallery before his death in 1982. His donation came to be known as The Gift and it is housed in the Sredersas Gallery, but the recognition will now have to change.

Wollongong mayor Gordon Bradbery said the council, along with the SJM and NSW Jewish Board of Deputies (JBD), will work together to consider how to represent the art collection “respectfully” following the revelations.

“It will be an ongoing effort on behalf of both to represent that collection in a way that is respectful, not only of the value of that collection and its importance, but also its history,” Bradbery said.

“The way the individual Bob Sredersas might have been involved in some activities, that means we’ve got to rethink how we present that collection.” 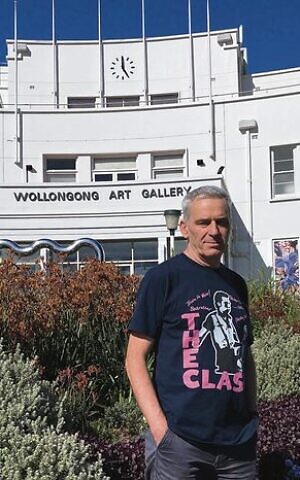 Michael Samaras, who prompted the investigation at the Wollongong Art Gallery.

The investigation into Sredersas was prompted by former Wollongong councillor Michael Samaras, who spent years digging into the Lithuanian immigrant’s past.

He had grown suspicious when an article in 2018 described Sredersas as being a policeman for the Lithuanian government’s Department of Security and he told The AJN that he welcomes the findings.

“I really appreciate the expert work done by Professor Kwiet and the SJM and I appreciate the confirmation that Sredersas was a Nazi perpetrator,” Samaras said.

“Just having the report removes any doubt and it’s clear action has to be taken.”

Samaras said he would love to see a collaboration between the SJM and Wollongong Art Gallery because “there is always room for more education and understanding about what happened in Europe.”

Samaras first presented his evidence to Wollongong Council earlier this year and in March the JBD met with the mayor to express concern and offer assistance.

At the time, JBD CEO Darren Bark said the meeting with the council was “a sign they are taking this seriously and that is much appreciated, not only to the Jewish community, but to the broader Wollongong community who deserve answers about this individual’s past”.

The historical documents collected by Samaras were identified as authentic by Kwiet, who described Sredersas as an “opportunist” and “a cog in the Nazi machinery of mass destruction”.

“He might not have committed murder, but his wartime position within the SS and police apparatus made him complicit to the Holocaust and other hideous crimes perpetrated.”