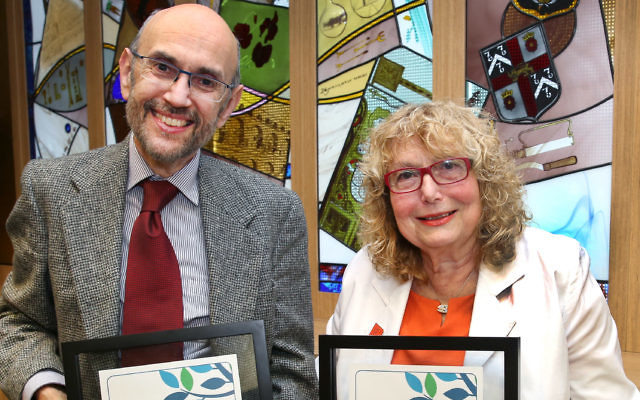 THE National Council of Jewish Women lounge at Wolper Jewish Hospital was packed last week as the Jewish community honoured Shula Endry-Walder and Professor Leslie Burnett for their dedicated service to Gift of Life Australia and the Australian Community Genetic Carrier Testing Program.

Accepting her award, Endry-Walder recalled a phone call she received 26 years ago from -18-year-old leukaemia patient Jay Feinberg in New York, who had read her article in the Human Genetics Journal.

Feinberg’s parents had sold their house, bought a Winnebago and travelled around America signing Jewish donors to the bone marrow donor registry. In four years, they tested 68,000 people and saved 15 lives. But they did not find a match for Jay.

In 1995, the Feinberg family was ready to give up. But a friend organised a final drive in Wisconsin. The last person in the line was -16-year-old Becky Faibisoff, but law prohibited testing for anyone under the age of 17. Faibisoff insisted she had a permission note from her parents, and although they never found the note, they did find the miracle cure for their son they’d been searching for.

On June 2, Feinerg joined Endry-Walder at the Gift of Life 25th anniversary gala, where they celebrated the 330 lives saved since 1991, the 33,300 potential donors currently on the registry and the 21st anniversary of Fineberg’s lifesaving transplant.

Endry-Walder’s daughter Eva Novy gushed, “I’m so proud of my mother. She’s amazing. She works all day every day and it’s always to help others.”

Rabbi Dr Dovid Slavin praised Endry-Walder at the ceremony, saying, “According to the Talmud, one who saves a single life saves the world. Shula has saved many worlds.”

Burnett, who accepted his award alongside Endry-Walder, is best known for introducing the genetic carrier testing program (formerly the Tay Sachs test) into the Sydney Jewish community in conjunction with the Jewish Community Appeal.

“Not a single child in the past 15 years whose parents have been tested has been affected by Tay Sachs,” Burnett said proudly. “I pray that nobody else will ever have to go through it again.”