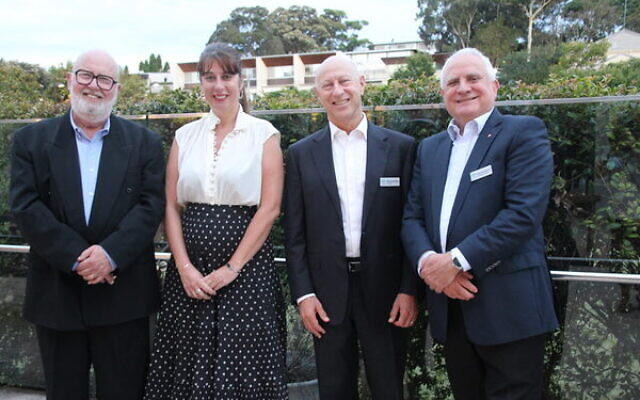 To mark this milestone, a specially curated annual report was produced paying tribute to its 60-year history, in which all 92 directors who served on its board over this period were acknowledged.

A highlight of the evening was a special tribute to three community leaders who have made a significant contribution to Wolper’s history – Harry Aizenberg, Lynne Davies and Daniel Goulburn.

Aizenberg, Wolper’s CEO for over 32 years from 1981 to 2014, was appointed a life member. He oversaw a major re-development of the hospital, the closure of its surgical theatres, its successful expansion into the provision of new medical services and the founding of Wolper’s community genetics program.

Speaking in support of the motion, honorary life governor David Golovsky noted, “Harry kept the hospital on an even keel through its many changes over 32 years … He put his heart and soul into the hospital, engendered respect and loyalty and the legacy of his leadership is still present.”

The late Lynne Davies was president of Wolper from 1986 to 1999, while concurrently performing a number of other senior community leadership roles including serving as the national president of the National Council of Jewish Women of Australia (NCJWA).

Under her presidency the hospital initiated its successful and important entry into orthopaedic rehabilitation and palliative care, and Wolper’s community outreach programs were expanded.

The Wolper board acknowledged Davies’ outstanding service with a plaque dedicated to her in the NCJWA (NSW) Lounge in the hospital.

Davies passed away at the age of 56 in 2004 and her daughter Trudy Gilbert accepted a framed replica of the plaque and spoke of her mother as “a truly remarkable woman. A woman of vision – committed and tenacious.”

Daniel Goulburn, who was appointed an honorary life governor, served as Wolper president from 2014 to 2019 and was previously honorary treasurer. As president, he established a revised governance structure, initiated a review of the constitution, and oversaw the hospital renovation and refurbishment program. He is also the inaugural chair of the Wolper Jewish Hospital Health Foundation.

“I sincerely thank and congratulate the hospital’s executive, doctors, clinical team and general staff on their ability to provide outstanding care of our patients and each other while coping simultaneously with the impact of the pandemic and a major renovation of the hospital,” he said.

The hospital received tributes from across the community, including a personal letter from Prime Minister Scott Morrison.

Morrison’s heartfelt comments were based importantly on his personal experience of having both his parents cared for at Wolper noting with regard to his late father that “Wolper cared for him with gentle and loving kindness” and provided his mother with “exceptional care”.

The Prime Minister noted, “Your founders were inspired by a vision to uphold the principles of dignity, compassion and quality of care for all.

“In Wolper, that inspiration has become an achievement in which you can take great pride.”