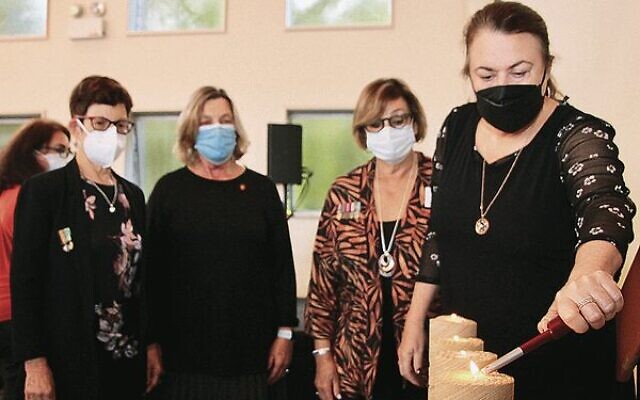 Evie Smith lights a memorial candle at NAJEX's Anzac Day service at the NCJWA Hall in Woollahra on April 24.

THE substantial role that the National Council of Jewish Women of Australia (NCJWA) played in the WWII war effort was celebrated on April 24 at a well-attended NSW Association of Jewish Ex-Service Men and Women (NAJEX) Anzac Day service at NCJWA Hall in Woollahra.

NCJWA NSW president Maxine Bachmayer paid tribute to Dr Fanny Reading, who founded NCJWA in 1923, and “who used to say that service is the rent we pay for the space we occupy in this world”.

Presenting a leaflet about the organisation’s first 25 years, Bachmayer said, “Through the combined efforts of the volunteers, they undertook an extraordinary amount of work,” from supporting newly arrived refugees, to raising money for a range of charities.

“On the day after the outbreak of WWII, they were galvanised into action, sewing comfort items for the fighting forces.

Other wartime achievements by the NCJWA included donating 3100 pounds for the building of the Sir John Monash Recreation Hut in Hyde Park, and raising 300,000 pounds for the Commonwealth War Loans program.

NAJEX president Roger Selby said it was great to see student leaders from all the Sydney Jewish schools, the 3rd Rose Bay Judean Scouts, the Mt Sinai College choir, and bugler Jonah Samuels from Moriah College, participate in the service.

“This is the time to pause and remember the sacrifices that were made by so many, so that we can enjoy the freedom we have in our wonderful country,” Selby said.

“Indeed, the current terrible situation in Ukraine, which we see nightly on our television screens, really brings it home to us just what many of them went through.”

When introducing the service, Rabbanit Judith Levitan said just as the process of “active remembering” is a key part of the recently completed Jewish festival of Passover, it is also central to Anzac Day.

“We celebrate the Anzac values of courage, mateship, teamwork, and self-sacrifice, and we promise to incorporate these ideas into our lives,” she said.

Colonel David Wilkins, whose extensive military career included a leadership role in the 50th Battalion deployed to Vietnam in 1969, spoke of the army regulars, conscripts, and less experienced reinforcements, who despite finding themselves in the thick of jungle-based warfare, “accepted, faced and overcame each challenge together, just like the Anzacs before them”.