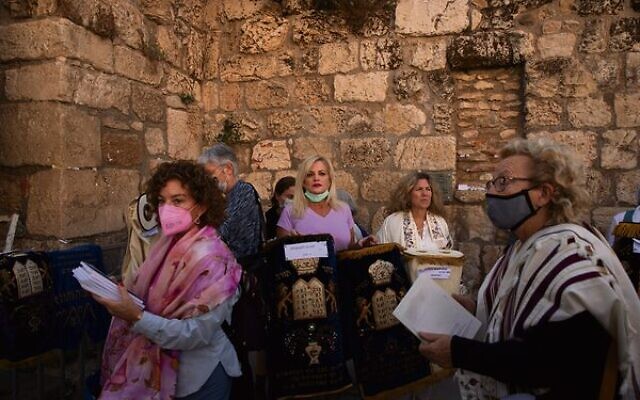 Members of the Women of the Wall praying at the Kotel last month. Photo: AP Photo/Maya Alleruzzo

“OF” and “for” are sticky prepositions. Women of the Wall (WOW) came first. It was started in 1988 with the aim of conducting monthly Rosh Chodesh prayers in the women’s section of the Kotel.

Let’s start with basics. Size does matter. Whoever drew the line between the men’s and women’s sections at the Kotel was wilfully untalented at geometry. One third for the women and two thirds for the men, but I invite correction. It may not be that generous.

The result is that women worshippers can barely hear services on the men’s side and the only way to catch a glimpse of events of major significance is to wobble precariously on plastic chairs placed strategically at the mechitza.

Leah Aharoni, one of the founders of Women for the Wall recently expressed her objections to WOW in an article in The Jerusalem Post.

Aharoni label-shamed WOW as being “Reform” noting that the incoming CEO of the Israeli Reform movement shares an office with the chair of the Women of the Wall, Anat Hoffman. Guilt by association indeed!

She then charged WOW with being “a front for the political aspirations of the Israeli Reform movement “and decried the “abuse they pour on the Western Wall, the holiest accessible site to the Jewish people”.

Aharoni’s first problem is that she doesn’t welcome non-Orthodox worshippers. Her next arguments are that female prayer is inherently offensive and therefore abusive of Judaism’s most “holy” site. She opines that “it does not matter that their [WOW’s] antics deeply offend the millions of actual flesh-and-blood worshippers who view (and use) the Kotel as their spiritual home”.

There are some WOW members who identify as Progressive Jews and there are also those who are Orthodox and Charedi. (I hate labels, but they are useful for the limited purpose of exposing Aharoni’s mendacity). WOW is constituent of women of all backgrounds, modestly dressed, who crave an opportunity for public prayer. The synagogue they attend should be irrelevant. No worshipper should be labelled or cross-examined as to their religious affiliation.

Is the Kotel the holiest site in Judaism (save for the Temple Mount)? Why would worshippers be offended by the Rosh Chodesh prayer of WOW? Most critically, because Judaism is a body of religious law governing daily routine, is female prayer halachically offensive?

Being holy is a largely subjective notion. “Holiness” suggests a greater connection to the Almighty, as though the prayers pleaded from that location have greater impact, power or accessibility. Yet Chassidim often pray at the grave of their Rebbe and designate that place as a holy site. The Lubavitcher Rebbe’s resting place in Queens, the grave of the Breslev Rebbe, Rabbi Nachman in Uman, are all places considered to be imbued with a sense of “kedusha” or holiness.

For argument’s sake, let’s agree that there are several sites at which both Jewish men and women feel close to God. The Kotel is one of them.

The prayer of a woman or a group of women can never constitute “abuse” or adversely affect the holiness of the Kotel. When men and women hurl insults and throw garbage at WOW, when they are physically assaulted as they attempt to enter the Kotel plaza, that is abuse of a holy site.

Moreover if “achdut” – unity – is an objective to which we all should strive and be conscious of the fact that the Temple was destroyed because of “sinaat chinaam” – internal strife – I struggle to understand how Women for the Wall reconcile their actions with their view of the Kotel as being a holy site.

Aharoni is clever enough to couch her opposition as political rather than halachically based. She derides WOW’s “feminist agenda” modest contingency (30-40 people) Reform political agenda and the presence of a Sefer Torah in the women’s section without going so far as to articulate why that is problematic.

What could be the halachic objections to a modest group of women reading from the Torah? That the voice of a woman in song is “erva” – nakedness? Erva does not apply to tefilla. What if the woman holding the Torah is ritually impure, “niddah”? The Rambam in Hilchot Kriyot holds that all those who are impure, “even niddot”, are permitted to hold a Torah scroll and to read from it.

Please don’t be fooled into thinking that the argument is based on logic, modesty or halacha. The agenda behind the Women for the Wall is the ageless battle of men trying to silence and contain the voice of women. You may have squeezed us into a sliver of the Kotel, but you cannot silence our prayer.

Deborah Huber was a student at Moriah College in the 1970s. She was privileged to be taught Tefilla by Max Lemberg, as well as Eddie Pilcer and Harold Nagley. Males and females learned to read from the Torah. “This was a Judaism we were proud to practise and pass on to subsequent generations,” she says.