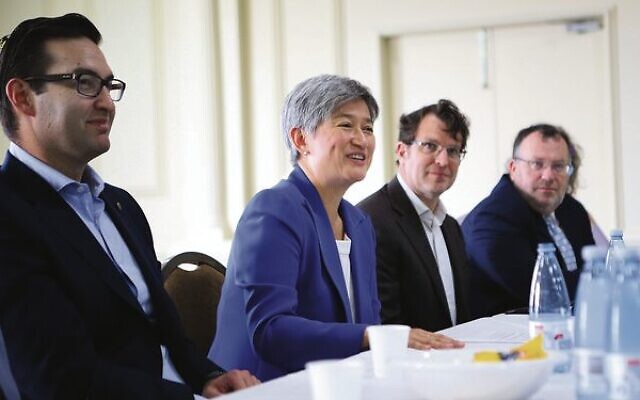 SHADOW Minister for Foreign Affairs Penny Wong took aim at the Prime Minister and the government this week for suggesting that the ALP was not as committed to Israel as the Liberals.

Addressing communal leaders in Melbourne on Tuesday at a briefing hosted by Zionism Victoria and the Jewish Community Council of Victoria (JCCV), the Leader of the Opposition in the Senate reaffirmed Labor’s commitment to a “just and enduring peace, and a two-state solution that is negotiated between the parties”.

Stressing that bipartisanship still held, Wong took issue with the interview Scott Morrison gave to The AJN two weeks ago, cautioning against those who “assert there is division and difference, when there is not, in an attempt to gain votes”.

She also recalled the Prime Minister’s talk of recognising West Jerusalem as Israel’s capital “in the context of the [October 2018] Wentworth by-election”, adding, “There may be times we don’t do everything you want in the way you want. But I promise you one thing, we will not base foreign policy on domestic political interests.”

Turning to the boycott, divestment and sanctions (BDS) campaign, Wong noted, “Anthony [Albanese] and I have been very clear about our opposition to BDS.”

She recalled that in 2011 when Marrickville Council voted to support BDS, “The person who led the opposition to that in the local context was Anthony Albanese well before he became more senior – so he has a long and consistent position on this. And that remains the party’s position.”

As to why neither she nor the ALP leader had publicly condemned the recent boycotts of the Sydney Festival, she said, “I was actually on leave and Anthony wasn’t asked.”

However, when it was pointed out that The AJN had approached his office at the time, and that readers had expressed concern over the leadership’s silence, federal member for Macnamara Josh Burns – who accompanied Wong – conceded that “our media strategy sometimes … can get lost in the day to day”.

Meanwhile, having noted that Wong consults with him and others when issues relating to Israel arise, he insisted there were “good reasons for the community to be confident that an incoming Labor government will be absolutely shoulder to shoulder with the Jewish community”.

Wong, meanwhile, hailed Burns as “an extraordinarily good member of Parliament”, adding, “He displays a … political and personal wisdom beyond his years.”