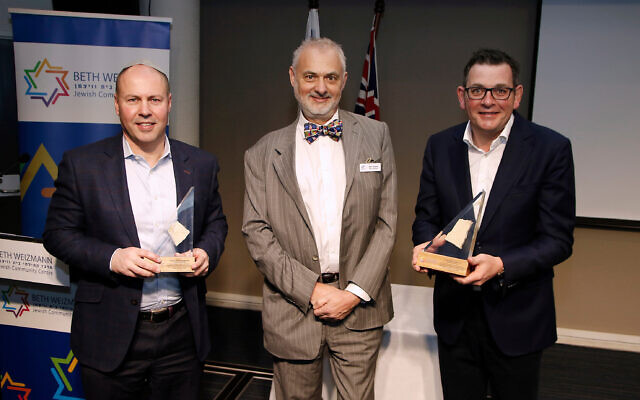 ANTISEMITISM and the threat of violence against Jews “is very much a part of daily life for Australian Jewry”, lamented Victorian Premier Daniel Andrews, but he said new fortifications at Beth Weizmann Jewish Community Centre (BWJCC) – which reopened last Sunday – are there to “keep those who will not change at bay”.

The building, home to a number of communal organisations, was buzzing like a school on the first day of term, as attendees – upbeat to greet one another out of lockdown – took to their socially distanced seats to hear Andrews and Federal Treasurer Josh Frydenberg reflect on the centre’s security upgrade.

The refurbished complex – sporting a front façade of imported Jerusalem stone – hosted an A-list of politicians and community representatives. It was also an opportunity to thank the state and federal governments for their funding.

Welcoming the “strong and bipartisan support” from the federal Liberal government and state Labor government, Zionism Victoria president Yossi Goldfarb stated, “I am truly grateful, not just as the president of the organisation that owns and operates this centre, but also on behalf of and together with the entire Jewish community.”

Andrews told the gathering, “We ought not in this day and age have to fortify buildings like this in the way that we do. But antisemitism in all of its evil is not just a concept in Europe or on the other side of the world, it is very much a part of daily life for Australian Jewry and is very much part of the daily challenge that we as policy makers and elected governments must combat.”

Frydenberg said there were now “more antisemitic acts than our community can keep count of”.

“We are now more than 75 years on from the end of the Holocaust and the Holocaust was a handbrake on antisemitism around the world because it was very clear the path where that leads,” he added.

But the funding required for community security reflects “the harsh reality that there is an ever-present danger and threat to Jewish people and Jewish premises, even in a great country like ours”.

Speaking to The AJN, the Premier noted, “It’s a sad day in some respects but also one filled with hope, because we know that this is now a safe space for the Jewish community.”

Frydenberg added, “Given its prominence, it’s only appropriate that it has a level of security that is commensurate with the threat.”