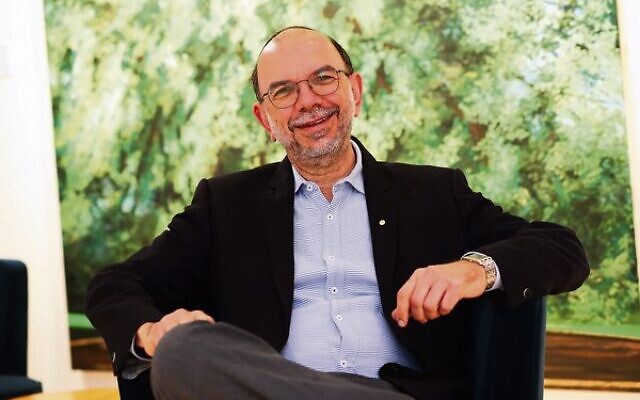 What inspired you to create this anthology?

I suppose it was brewing for a while. There’s the story of the artist who’s asked how long it took to create the work, and he says it took about a year to create it, but it took 35 years to learn how. It developed from my parsha pieces, just reflecting on the parsha, relating it to contemporary events.

People who I greatly respect began encouraging me to compile these into a book. Among them were Dr Erica Frydenberg, who as a lecturer and writer in psychology, has written a lot herself, and Professor Frank Oberklaid. They gave me the confidence to start writing. And Dashiel Lawrence [who became the anthology’s editor] was very influential. He could see a shape in it. About two years ago, in the middle of the COVID lockdowns, we started.

The book deals with topics from the individual (such as loneliness), to the universal (pandemic, climate change). Why such a wide range?

And I’ve had the good fortune of seeing that what’s meaningful to me can be meaningful to others as well. Orthodoxy is a vital voice in contemporary Judaism, and I wanted to show how in Judaism, we’ve got the wisdom to share the conversation of civil society now. Religion isn’t just for the religious, but can and should be a global voice.

Psychology, rabbinic thought and a deep-dive into literature are among the resources you’ve called on. How have you used these?

As the book will show, I love literature – it was probably one of my first loves. I studied English literature, but my parents thought it wasn’t a good job for a nice Jewish boy, so I left literature. Then I said what about psychology? I did my Honours. And then I did my Masters in Counselling. I always grew up with Jewish texts and learning. I study a page a day of Talmud. But as Jews, we were also expanded by other ideas and philosophies. And we can give to them as much as we can take from them.

And some people may think what’s philosophy or what’s psychology got to do with Judaism? I’ve had those kinds of comments from people over the years. But we’re not threatened unless we are unsure of our own base, and for me, modern Orthodoxy is a firm foundation from which I then draw on philosophy, literature, psychology.

You go well beyond Jewish affairs into the universal domain that’s Judaism’s footprint. What does Judaism say about social justice?

Social justice and human rights are at the very heart of our identity as Jews. God says to Abraham, I want you to follow the ways of righteousness and of justice. And Abraham becomes a great champion of justice. With Moses, in his early life, he reached for justice when his fellow-Jews were being oppressed. The burning bush moment was the birth of social consciousness.

Our prophets were great voices for human rights, as more recently were [Rabbi Abraham] Heschel, who marched with Martin Luther King, [Rabbi Joseph] Soloveichik, a great expositor of human rights, who I mention a number of times in the book as a kind of father of contemporary modern Orthodoxy, and Rabbi Jonathan Sacks. They speak about what’s at the heart of our Jewish identity, which at the same time is about a universal Jewish voice.

Your title, Living in an Upside Down World, suggests chaos. Did you set out to disquiet the comfortable?

I often say that. But, you know, everyone now is somewhat uncomfortable. There’s so much anxiety. This book is less about challenging the comfortable, although I hope that is part of what I’ve done. But maybe it’s just to make people think, to challenge them, to stretch them. I hope it will stretch some people to think about Judaism and to think about our relationship to the world — and our responsibilities.

A rabbi of many achievements

Born in Zimbabwe and raised in South Africa, Rabbi Ralph Genende has for more than three decades inhabited the modern Orthodox bimah — in Auckland and at Melbourne’s Caulfield Hebrew Congregation.

He was president of the Jewish Christian Muslim Association and a long-time executive member of the Rabbinical Association of Victoria. In 2018, he was awarded an OAM for his services to multifaith relations, and to the Jewish community of Victoria.

He convenes Kehillat Kesher, a contemporary Orthodox initiative promoting an inclusive perspective that welcomes all Jews and their partners. It particularly reaches out to those who feel alienated or hesitant in the traditional Orthodox community, including some singles or families, LGBTI+ people, or those in a mixed marriage.

Rabbi Genende is married to Caron, they have three children and two grandchildren.

A public launch of Living in an Upside Down World, including a discussion between Rabbi Genende and psychologist Dr Erica Frydenberg, will take place at ARK Centre, Hawthorn East, on Monday, September 5, 7.30pm. Register at trybooking.com/CBNHL