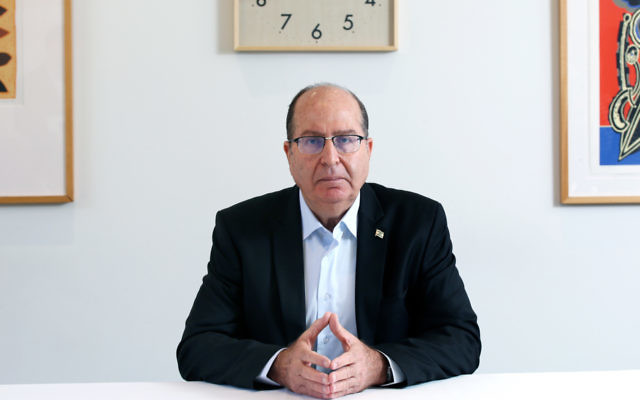 FOR Moshe “Bogie” Ya’alon, the man who could be Israel’s next prime minister, visiting Australia has become something of a tradition.

The former defence minister first visited in 2006, following his retirement as Chief of Staff of the IDF.

He is now back in the country, having recently resigned from Benjamin Netanyahu’s cabinet and announced his intention to run for prime minister in the next election.

“It’s become a tradition to come to Australia immediately after any term in Israel,” Ya’alon joked when speaking exclusively to The AJN this week.

Ya’alon, who is visiting the country for WIZO and The Joint was full of praise for Australian Jewry, stating, “It is well known in Israel that the Australian Jewish community is very committed to the State of Israel, very Zionist. I am glad to be here and to experience it.”

Aside from his address at The Joint and WIZO’s dinner in Sydney last night (Wednesday), Ya’alon has sightseeing in his itinerary, as well as meetings with leaders of the Jewish community and officials from the Coalition and Opposition.

“All of us are offended by radical Islam, by Daesh, by the Iranian threat. I am here to speak out about these challenges,” Ya’alon said.

Noting that “Israel is facing many challenges”, he said military power is not the only way to combat the country’s enemies.

“In the past it was about military power; but as our enemies realised that the weakest link in our national security chain is the ability of society to stand, they try to target deliberately our civilians,” he said.

“And in this regard, many soft elements, not just military power, become very important.”

Asked what Israel can learn from the Diaspora, and vice versa, Ya’alon replied, “We’re in the same boat, on the same page, when we have to meet the present challenges as a Western like-minded people.

“We are offended by radical Islam, all of us, in the United States, Europe, Australia and New Zealand and Israel, so we should fight back together.”

“We have to share our observations, our views regarding the challenges ahead of us. I find common ground in this regard.”

Speaking about The Joint and WIZO, Ya’alon said the organisations are doing “a superb job regarding the ability of society to stand, dealing with education, poverty”.

“It’s extremely important to bridge the gap between those who enjoy a wealthy life and poor people in Israel as part of our national security,” he said. “And of course education is essential.  If I have to say in a nutshell what is our strength, it is all about education, knowledge, our minds, our hearts, the Zionist Jewish spirit.”