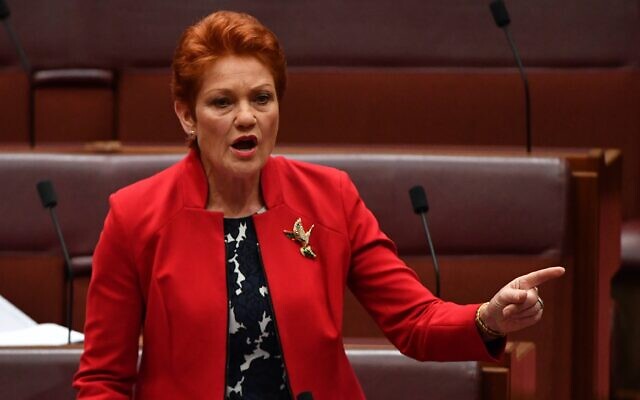 “THANKS, but no thanks. We don’t want or need your support on this issue.” That was the response of Anti-Defamation Commission chairman Dvir Abramovich following One Nation Senator Pauline Hanson’s call for a ban on the public display of swastikas.

The controversial politician publicly called on the Coalition and Labor to join One Nation in enacting legislation to ban the display and use of Nazi and ISIS symbols, after a man was seen with a swastika on his arm in the Melbourne suburb of Moorabbin over the weekend.

Slamming such insignias as “the ultimate symbols of hate, extremism, barbarity and terror”, Hanson said, “People who wear or parade these symbols have lost all sense of decency.”

A Melbourne man has been spotted wearing a Nazi swastika armband at a fruit and vegetable market in Moorabbin.The…

Posted by The Australian Jewish News on Saturday, February 6, 2021

She added, “Holocaust survivors and their extended families along with immigrants from ISIS-dominated countries in the Middle East know too well what the symbols stand for.”

But despite long spearheading a campaign for a ban on swastika displays, Abramovich charged, “No one is afflicted with amnesia. This newfound stance on the public display of Nazi symbols will not provide Senator Hanson with a free pass when it comes to her repeated attacks on multiculturalism and migration, her demonisation of the Muslim, Asian [communities] … and her repudiation of our ethnically diverse society.”

But he added, “There is no place for hate symbols and speech in this country – especially the swastika.”

The AJN understands internal ALP discussions exploring possible legislative options to stamp out the public display of the swastika are playing out.

Liberal Federal MP for Berowra, Julian Leeser – who sits on the Parliamentary Joint Committee on Intelligence and Security, which is holding an inquiry into extremist movements and radicalism in Australia – told The AJN that it is “appropriate to consider such issues including the ban of the swastika in the context of the inquiry”.

Raising the need for flexibility in legislation “to accommodate the constant evolution of new hate symbols by extremist groups”, co-CEO of the Executive Council of Australian Jewry, Peter Wertheim said, “Empowering the police to remove and confiscate hate paraphernalia would be a useful tool in countering the proliferation of extremist ideologies, but it would only scratch the surface.

“Such legislation would not obviate the need for a much more systematic, whole-of-government approach to address this problem, through both legislation and education.”

The Victorian inquiry into anti-vilification protections, currently ongoing, includes deliberations on a swastika ban. The reporting date is set for March 1.