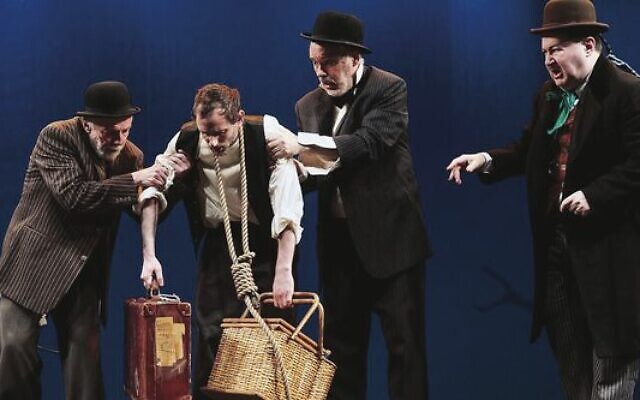 The Yiddish version of Waiting for Godot at the Royal Dramatic Theatre. Photo: Magnus Swärd/Judisk kultur i Sverige

ACTORS in last month’s production of Waiting for Godot at the Royal Dramatic Theatre in Stockholm performed neither in the classic play’s original English nor in a Swedish translation.

The performances marked the first time that a play in Yiddish was staged at Sweden’s national theatre company.

“I didn’t want it anywhere else but in Dramaten,” said Lizzie Oved Scheja, executive director of J!Jewish Culture in Sweden.

“We believe that Jewish culture should be a part of Swedish culture, and that it should be presented on all the main stages in Sweden.”

The three performances were filled almost to capacity and drew prominent audience members including the Swedish Minister of Culture, leading Scheja to characterise the staging as “a triumph of a culture that was supposed to be wiped out in the Holocaust”.

In Sweden today, no more than 3000 people out of a Jewish population of roughly 25,000 can speak Yiddish, according to the country’s Society for Yiddish (Jiddischsällskapet). Even that figure may be an overestimate, given the small number of Charedi Jews, the population that most often speaks Yiddish in their regular lives, and high rates of assimilation.

But the language has a long history in the country, dating back to the 18th century when Jews were first allowed to settle there. The population of Yiddish-speakers further rose at the beginning of the 20th century with a new wave of Jewish emigration, mostly from Russia, and after World War II, when thousands of Holocaust survivors arrived in Sweden, which had sheltered its own Jewish population from the Nazis.

In 2000, Yiddish became one of Sweden’s official minority languages (alongside Finnish, Sami, Meänkieli and Romani). The status of “cultural heritage” brought governmental funding for initiatives aimed at preserving the language.

At the same time, some younger Swedes have begun reconnecting with their heritage, in keeping with a trend that has unfolded across Europe.

“There is a generation of people who are now in their 30s, 40s, 50s, and find out that they are Jewish,” said Oved Scheja. Their interest in Yiddish means it is taught at universities in Lund and Uppsala, and at the Paideia, a 20-year-old Jewish studies institute in Stockholm.

Sweden’s radio has a program devoted to Yiddish called Jiddisch far Alle, or Yiddish for All, and two years ago a Swedish publisher, Nikolaj Olniansky, released a Yiddish translation of Harry Potter. The publication was partly financed by the government.

“Yiddish will survive and protect itself. As long as the Jewish people survive, the Yiddish language will survive too,” said Scheja.