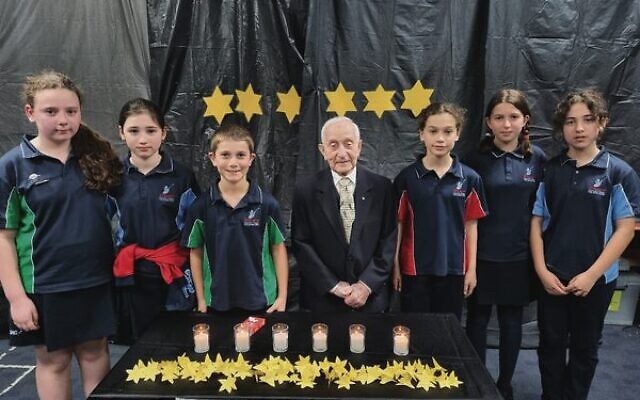 The students read and sang Yiddish poems and songs written during and about the Holocaust. The commemoration was concluded with the singing of Partizaner Himen.

Head of Jewish Studies and LOTE at Sholem Aleichem, Reyzl Zylberman said, “We believe it is important for our students to be engaged in Holocaust education and memorialisation.”

Following the assembly, the students were fortunate to hear from Abram Goldberg, who is a Holocaust survivor from Lodz. Having lost 15 family members in the Holocaust, Goldberg has dedicated his life to keeping the memory of the Holocaust alive and teaching its lessons.

Goldberg was a founding member of the Jewish Holocaust Centre in 1984 when it first opened to the public and since has gone on to be on the board and the executive.

The students were given the opportunity to ask Abram questions and to spend some time with him.

Zylberman shared that the students asked Goldberg “thoughtful” questions and “were grateful to have the opportunity to meet with him”.

“Our students had an opportunity to reflect on the assembly and on Abram Goldberg’s visit after these sessions, sharing their understanding of the importance of Holocaust remembrance,” Zylberman said.