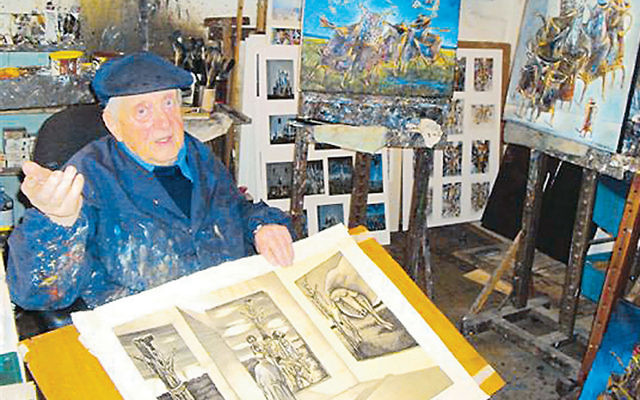 WHEN artist Yosl Bergner arrived in Australia from Europe in 1937, he studied at the National Gallery Art School and soon became part of the influential Melbourne art scene with Sidney Nolan, Arthur Boyd, Albert Tucker and John Perceval.

Bergner, who was born in Vienna on October 13, 1920 and grew up in Warsaw, came to Australia through a twist of fate – his father, Yiddish poet Melech Ravitch, made the journey to investigate an offer of land in the Kimberley region of Western Australia as a possible -homeland for the Jewish people in the wake of rising Nazism in Europe.

Bergner arrived in Melbourne in 1937, a year after his sister Ruth. While the homeland idea did not eventuate, Bergner remained in Australia and years later would travel to the Kimberleys to meet Aboriginal artists and learn more about their art.

In 1948, Bergner decided to return to Europe to work and, after two years of travelling and exhibiting in Paris, Montreal and New York, he settled in the newly established State of Israel with his wife Audrey. They lived in Tzfat for seven years before moving to Tel Aviv.

Bergner’s art was soon winning awards, including the Herman Struck Prize and the Dizengoff Prize. In 1980, he was awarded the Israel Prize for painting.

Until a few weeks ago, Bergner would go to his studio – situated next to his Tel Aviv apartment – every day to paint.

Israeli-born Australian artist and master printer Shaike Snir has been a lifelong friend of Bergner and has organised exhibitions of his art in Australia.

“When I first met Yosl in the 1970s, he said he was not a Zionist, but he does so much for Israel through his painting. He went to live in Israel because it is a Jewish state,” says Snir, who lives in Melbourne and visited Bergner -regularly, most recently last year.

“Yosl has been an unbelievably prolific artist. He has won many prizes in Israel and is very much loved by everyone. He will be remembered as an extraordinary artist.”

Bergner was a key figure in the artistic life of Snir, providing a mentoring role in his early years.

“Yosl gave my father a painting on the occasion of my birth and when I was attending art school in Tel Aviv he would often come to my home to try to teach me about painting,” says Snir.

Bergner has exhibited extensively in Australia, including a major -retrospective at the National Gallery of Victoria in 1985, as well as exhibitions in the United States, Canada, France, the Czech Republic and of course, Israel.

Among his early works to achieve acclaim was Aborigines Chained To A Tree. Snir says that Bergner’s art served as a voice for the Aboriginal people.

Bergner was also well known for designing theatre sets and costumes, including for Yiddish theatre.

Bergner died on January 18 and is survived by his wife Audrey, their daughter Hinda, four grandchildren and his sister Ruth, who lives in Melbourne and is aged 99.