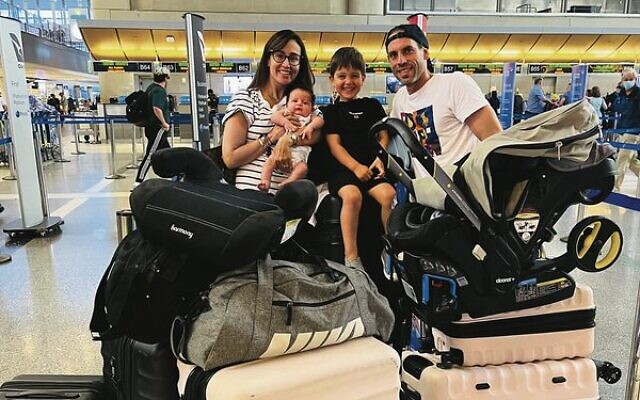 The Israel family returning home from Vancouver with their newborn son.

Two years ago Romi Israel was diagnosed with cervical cancer. She had a four-and-a-half centimetre tumour on her cervix and one option, to get a hysterectomy despite her desire to have another child.

On Erev Yom Kippur 2020, when she was just 34 years old and her first child was 18 months old the diagnosis came, and so began her medical journey to have another child, and of course living to see Yom Kippur 2021.

Israel and her husband, went to doctor after doctor and got many opinions from many different gynaecological oncologists around the world, all of whom told her to have chemo and radiation, which meant that she would never have any more biological children.

Eventually Israel found a doctor who said he would perform a hysterectomy without chemo or radiation, and after doing so they found no more cancer anywhere else in her body.

The next step in the process was having several rounds of IVF so that Israel and her husband could create an embryo.

Due to complications after the hysterectomy, Israel had to have 12 surgeries in 12 months, of which four were serious.

The first of the dozen was a surgery to cut off one third of her ovary to freeze it in case she needed chemo and radiation.

This was followed by some experimental surgeries – in which her ovaries were put into her abdomen – surgeries that were a result of complications, as well as straightforward IVF rounds.

So in the midst of all her surgeries, Israel and her husband went through the process with three women to be surrogates; however, none eventuated.

Surrogacy wasn’t working out in Australia, so the couple decided to look at finding a surrogate overseas.

“I found many agencies in California, all of whom told me that the wait to get a surrogate at the moment was 18 months to two years and I didn’t really take that as an okay option,” she said.

Through a friend Israel eventually found a boutique surrogacy agency in California. The perfect surrogate was found and they met for the first time via Zoom.

“I had to get my embryos sent to San Diego, in the middle of COVID, when Melbourne was in lockdown, and there were no flights coming in or out,” she told The AJN.

For Israel’s embryos to travel to San Diego they had to be kept in a cryo chamber at minus 240 degrees Fahrenheit (minus 151 degrees Celsius). 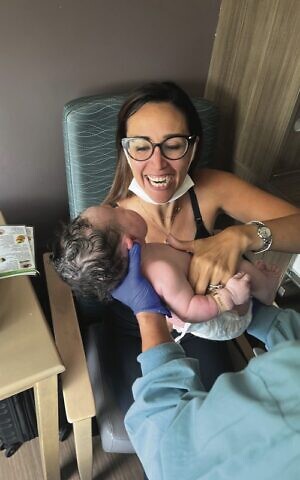 Romi Israel with her second son.

The person transporting the embryos had to take the chamber with them to hotel quarantine and then via London for eight days, as there were no direct flights to San Diego during COVID.

Israel said, “If that cryo chamber moved one degree north or south, my embryos would have died.”

Their prayers were answered when her surrogate fell pregnant.

To be closer to their surrogate, Israel, her husband and her son moved to Vancouver for the duration of the pregnancy.

“We had the most incredible journey. I’m so privileged to have actually gone on this journey,” she said.

On August 4 her baby boy was born and they returned to Melbourne, their family a little bit bigger, on September 1.

“I’m eternally grateful to God for allowing me to go on this journey, because there’s something very uniquely beautiful about it. And that I’ve been given the privilege of showing others that they can overcome mountains, and when they do that they will see that the view from the top is immeasurably beautiful,” she said.

She also shared that she couldn’t have gotten though this experience without her steadfast husband, “he just completely took care of me and my little boy,” she said, adding, “I didn’t have to worry about anything else besides what I needed to do, which was to go through my surgeries and recover physically, recover mentally, and recover emotionally.”

Her rabbi, Rabbi Yehoram Ulman, was also a huge help in guiding her through this difficult time, and she urges those dealing with similar issues of fertility and surrogacy to seek the council of Rabbi Ulman.