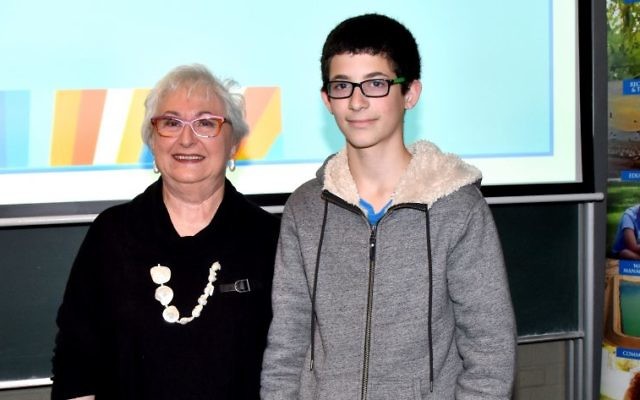 GIDON Goodman – the determined Sydney teenager who successfully campaigned to the NSW government to introduce a fairer hospital parking fee system – was among the big winners at last week’s Jewish Changemaker Awards ceremony in Sydney.

The annual awards, presented by JNF and B’nai B’rith, highlight the work and achievements of young people in the Jewish community who are dedicated to making the world a better place.

Goodman’s efforts, which included presenting a petition with more than 70,000 signatures to the NSW Health Minister, resulted in an $11 million statewide hospital parking fee subsidy package, effective from July 1, for people like him who need regular hospital treatments.

He was the winner of the youth (14-18) award for contribution to Australian society.

Masada College student Ariella Glasser and Carmel School (Perth) student Adam Kerbel – who both volunteer regularly in their respective communities – were joint winners of the youth category for contribution to the Jewish community.

The award recipients in the young adults section (18-35) were Alexandra Knopoff from Adelaide and Noa Levin from Perth (contribution to the Jewish community); Sydney’s Adam McCurdie (contribution to Australian society); Perth’s Asher Myerson (for support for the State of Israel); AUJS national chair Isabella Polgar (for leadership); and Sydney’s Rabbi Benji Levy (educator of the year).

B’nai B’rith Alfred Dreyfus Anti-Defamation Unit president Ernie Friedlander described the awards night as uplifting and said all the winners “are a shining light for others to follow”.

“They are all winners and so is the world by benefiting from their efforts,” Friedlander said.

Etty Ayalon, the JNF’s national executive and program coordinator, said “this award ceremony is quickly becoming known as a pool for the next generation of future leaders”.

“Organisations are beginning to look at the Changemaker nominees in order to offer them scholarships, jobs and volunteer opportunities to further their careers.

“We have now partnered with the Israeli Embassy who, moving forward, will submit worthy nominees to the Israel Ministry of Foreign Affairs’ International Young Leaders Scholarship Program.”