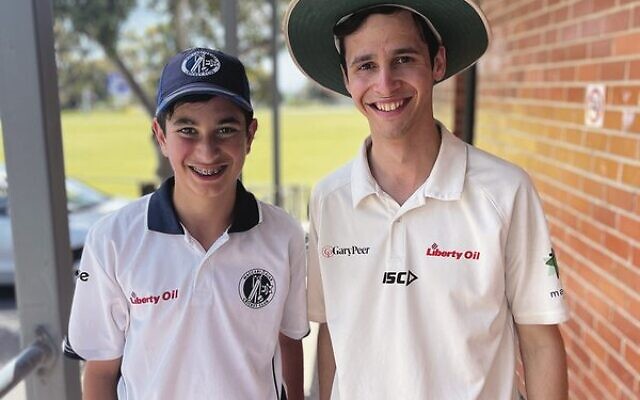 IT was a mixed round four of the Mercantile Cricket Association season for Maccabi-AJAX’s men’s teams in terms of results, with the Jewish club posting two wins and two losses.

In Sunday A grade, Maccabi-AJAX battled hard against fourth-placed Carnegie to win by one wicket, and move up to second on the eight-team ladder, just behind the Melbourne Cobras.

Carnegie began well in their chase, but a standout bowling spell by Josh Rotstein (3/30), and accurate bowling at the death by Mark Soffer, and Benji and Daniel Jones, who all took two wickets each, saw Carnegie bowled out for 135.

Maccabi-AJAX had a heavy loss to Burnley in B Grade. After being bowled out for 95, with Charlie Gross top-scoring with 29, Burnley’s batters were untroubled by Maccabi’s attack, and cruised to 1/98 to win the match.

Maccabi’s thirds team had an impressive five-wicket win in C South grade over Ashwood, with their youngest players leading the way.

Talented junior all-rounder Gilad Lowinger took his first senior wicket early in his spell, and finished with the outstanding figures of 4/21.

Nadav Moskow was also dangerous all innings, claiming 3/11, and Ashwood were all out for 98.

Joel Lewis (24) and Jeremy Hoppe (22) also made handy runs, and Maccabi-AJAX were only five wickets down when Eli Paneth hit the winning runs in style with a boundary.

Maccabi-AJAX’s development team, in Sunday C grade, were bowled out for just 86 against Parkville Districts, who replied with 5/93. The best of Maccabi’s bowlers was Jesse Onas, who took 3/22.