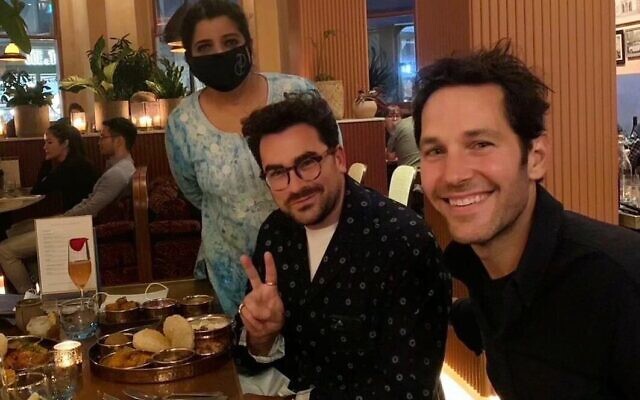 JEWISH actor and comedian Paul Rudd again has fans wondering how his looks remain so youthful.

The Ant-Man star, 52, was photographed dining at a London restaurant along with Schitt’s Creek star Dan Levy earlier this month.

“When Paul Rudd returns to your restaurant and brings Dan Levy with him!!!,” chef Asma Khan excitedly tweeted on August 1.

When Paul Rudd returns to your restaurant and brings Dan Levy with him!!! pic.twitter.com/pkRtnF9pDt

“Paul Rudd is ageing backwards I swear,” said one tweeter.

“Imagine if JLo and Paul Rudd had a baby, they would be immortal,” said another, referring to the equally youthful-looking singer and actress Jennifer Lopez, who is also 52.

“I moisturise my face every time I see a picture of Paul Rudd,” said a third.

News.com.au observed, “Rudd’s not on the red carpet at an awards show, he’s not posing for an airbrushed magazine cover – this is just what he looks like in the sort of candid, mid-meal photo most of us would quietly untag on Instagram. What kind of sorcery?”

Meanwhile, Levy’s presence in the photo has fuelled speculation he will appear alongside Rudd in the third film of Marvel Studios’ Ant-Man franchise, Ant-Man and the Wasp: Quantumania, which is currently being filmed in London.