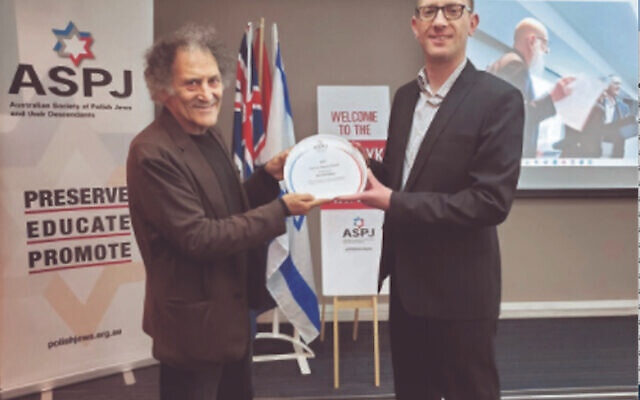 The author of titles such as Jewels and Ashes, Café Sheherazade and Scraps of Heaven was presented with the accolade by the Australian Society of Polish Jews and their Descendants (ASPJ) at Beth Weizmann last week.

The annual award honours Henryk Slawik, a Polish politician, diplomat and social worker who saved 5000 Hungarian and Polish Jews with false passports during the Holocaust. It recognises an individual or organisation contributing to a better understanding of Jewish Australians with a Polish background.

Paying tribute to the late Marek Edelman, the last surviving leader of the Warsaw Ghetto uprising, Zable recalled their inspirational meeting in Poland in 2006.

He noted that unlike fellow Bundists who fled to Czechoslovakia in 1948 when the Communists came to power aware the Bund would be outlawed, Edelman – a cardiologist – decided to remain in Poland.

He later became a founding member of the Solidarity democracy movement during Communism’s twilight years, working with Open Republic, an organisation battling antisemitism and xenophobia, and became a senator in the democratic era.

“His whole life, from his pre-war Bund youth to his resistance against Nazism and Stalinism had been guided by one consistent goal, he insisted, an inclusive, democratic Poland,” said Zable.

In an era when Poland’s ruling Law and Justice party is further restricting historians’ discussions of Poland’s role in the Holocaust, Zable reflected that Edelman would have understood the distinction between today’s “troubling rise of ‘ethnos’ politics – identity politics based on blood ties – as opposed to ‘demos’ politics, based on universal, territorial citizenship … he never doubted he belonged to Poland”.

But Edelman called out “racist and discriminatory politics in Poland and Europe at large, as elsewhere, as everywhere, as in our country too”.