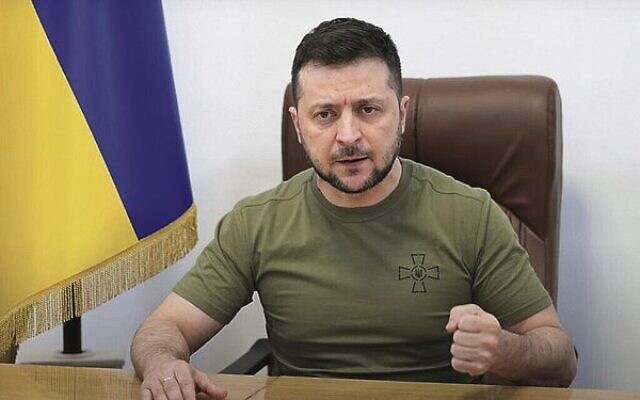 In a caustic address to Knesset members on Sunday, during which he repeatedly invoked the Holocaust and criticised Israel for failing to arm his country, Ukrainian President Volodymyr Zelensky pleaded for help defending against a Russian “final solution” for his people.

Beginning his speech via Zoom to Knesset members, Zelensky said Ukraine and Israel face the same threat from their respective enemies – “the total destruction of our people, our state, our culture, even the name: Ukraine, Israel.”

Zelensky, who is Jewish, noted that February 24 – the date Russia launched its invasion of Ukraine – was also the date on which the National Socialist German Workers’ Party, the Nazi party, was founded in Germany in 1920. On February 24, 2022, he said, “102 years after the Nazis, the order was given to begin the Russian invasion of Ukraine, which has already killed thousands of people and left millions without homes. They’ve become refugees … in dozens of countries.

“Our people are now wandering the world, searching for a place, just as you once wandered … seeking security, trying to stay alive, and in peace. Exactly what you have sought,” said Zelensky.

“The Russian invasion of Ukraine is not a military operation as it is presented in Moscow,” he added. “It is an all-out war, illegitimate, intended to destroy our people, our country, our cities, our culture and our children. Everything that makes Ukrainians Ukrainians.”

Zelensky then doubled down on the comparison with the Holocaust, which he has invoked repeatedly since the Russian invasion, at times drawing criticism from Jewish groups.

“The Russians use the terminology of the Nazi party. They want to destroy everything. The Nazis called this ‘the final solution to the Jewish question,'” he said. “And now … in Moscow … they’re using those words, ‘the final solution’. But now it’s directed against us and the Ukrainian question.”

Zelensky noted a Russian missile attack that struck near the Babyn Yar Holocaust memorial in Ukraine’s capital Kyiv – “You know that there’s a memorial to the victims of the Holocaust and a Jewish cemetery there” – and said missiles have targeted Uman, “where tens of thousands of Israelis come each year to visit the grave of Rabbi Nachman.”

Zelensky then appealed to Israeli lawmakers for assistance and criticised them for failing to arm his country, refusing to take in large numbers of refugees, and opting out of many of the biting sanctions against Russia and its interests that have been imposed by the West.

“I’m sure you feel our pain, but can you explain why we’re still waiting … for your help … when other countries are giving help? Why isn’t Israeli help, or even entry permits, forthcoming?” he asked.

“What is it? Indifference? Political calculation? Mediation without choosing sides?” Zelensky added.

“I’ll leave you to provide the answers to these questions, but I want to point out that indifference kills. Calculations can be wrong. You can mediate between countries, but not between good and evil.”

Zelensky said that Israel’s Iron Dome rocket defence system is considered the best in the world – apparently referring to Israel’s unwillingness to supply it to Ukraine, as he had previously requested.

“You know how to defend your interests and help Ukraine. To defend Ukrainians. To protect the Jews of Ukraine,” he said. “We can ask many times why we’re not getting weapons from you, why Israel hasn’t imposed serious sanctions on Russia.

“You need to provide answers to these questions and live with them,” he said.

“Ukrainians made their choice 80 years ago. We saved Jews and that’s why there are Righteous Gentiles among us,” added Zelensky, seemingly ignoring the complicity of some Ukrainians in the Nazi extermination plan.

“People of Israel, you too now have a choice,” he concluded.

Israel has long maintained good relations with both Ukraine and Russia, and has been seeking to use its unique position to broker an agreement between the sides, as it tries to walk a tightrope maintaining its ties to both countries.

Israel has been seeking to avoid antagonising Russia, which has a strong presence in Syria, where Israel carries out military action against Iran-linked groups.

There have been numerous apparent ups and downs in Kyiv’s relations with Jerusalem in recent days, with Ukraine at times lauding Israel’s diplomatic and humanitarian efforts and at other times strongly criticising its reluctance to help more than it had done.

Israel’s relationship with Kyiv has also been strained by the fact that Prime Minister Naftali Bennett has avoided directly blaming Russia for the war, although Foreign Minister Yair Lapid has done so on several occasions.

Following his speech, several Israeli politicians criticised Zelensky for drawing comparisons between the Holocaust and Russia’s invasion of Ukraine.

Foreign Minister Lapid, in an initial response to the speech, refrained from criticising Zelensky.

“I reiterate my condemnation of the attack on Ukraine and thank President Zelensky for sharing his feelings and the plight of the Ukrainian people with members of the Knesset and the government,” he said in a tweet. “We will continue to assist the Ukrainian people as much as we can and we will never turn our backs to the plight of people who know the horrors of war.”