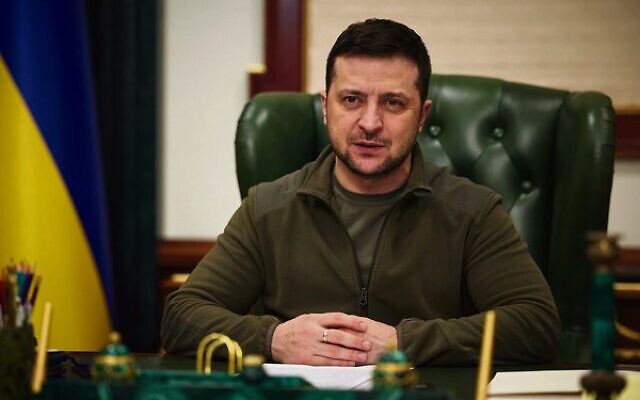 UKRAINIAN President Volodymyr Zelensky said on Tuesday that he had spoken to Israeli Prime Minister Naftali Bennett and thanked him for his efforts to mediate between Moscow and Kyiv.

In an English-language tweet, Zelensky said that the two “discussed ways to end the war and violence”.

He did not mention when the call took place. There was no immediate comment from the Prime Minister’s Office.

Talked to @naftalibennett. Thanked for Israel’s mediation efforts. Discussed ways to end the war and violence.

This would be at least the fifth call between the two leaders since Russia’s invasion began on February 24.

The Kremlin said on Tuesday that Bennett had also spoken to Russian President Vladimir Putin again to discuss the situation in Ukraine, which would be the second phone call between the leaders since Bennett’s trip to Moscow last Saturday.

The Israeli premier visited Russia for a meeting with Putin on Saturday, trying to help broker an end to the war with Ukraine. After meeting with Putin, Bennett spoke to Zelensky and French President Emmanuel Macron, and also visited Berlin on Saturday for talks with German Chancellor Olaf Scholz. Bennett also spoke to Putin by phone on Sunday.

Israel has had an up-and-down relationship with Ukraine since the start of Russia’s invasion on February 24. Zelensky reached out to Bennett early on, urging him to make use of Israel’s working relations with Kyiv and Moscow to mediate between the sides.

Bennett has attempted to do so, but his reluctance to directly criticise Moscow for its invasion – due, in part, to Russia’s control of Syria’s skies along Israel’s northern border – has incensed Kyiv and others.

Ukrainian officials have thanked Israel for its mediation attempts as well as for sending humanitarian aid to civilians fleeing the country, but Zelensky also criticised Bennett last week, saying he felt the premier was not “wrapped in our flag,” a reference to a photo showing Israeli men wrapped in Ukrainian flags at the Western Wall.

An emotional Ukrainian Ambassador Yevgen Korniychuk addressed the conference of the Institute for National Security Studies on Tuesday and said Kyiv “believed” – in the past tense – that Israel was a close friend and partner.

Korniychuk was visibly upset as he spoke about the situation in the city of Kharkiv.

“Kharkiv is the second biggest city in Ukraine. Lots of the foreign students, including Israelis, who did not evacuate on time. People have been sleeping underground for the past two weeks,” he said.

“There is a shortage of food and pharmaceutical products. We are seeking international assistance in all possible spheres, including from Israel – this country that we all believed is our close friend and partner.”

Meanwhile, Zelensky likened his beleaguered country to Jewish inhabitants of the Warsaw Ghetto during the Holocaust in an emotional call with US Jewish leaders this week.

During the Zoom conversation with the Conference of Presidents of Major American Jewish Organisations, Zelensky repeatedly compared Russian actions to those of the Nazis, from sieges to indiscriminate bombing campaigns.

He also compared Putin’s rhetoric against the Ukrainian people to that which was employed by chief Nazi propagandist Joseph Goebbels.

“This is just pure Nazism,” Zelensky said of Russian bombing attacks that have killed hundreds of civilians, according to unverified tallies.

“[Putin] is just destroying the citizens of Ukraine of different nationalities. This is just pure Nazi behaviour. I can’t even qualify this in any different manner.”

The charge was pointedly aimed at dispelling Russia’s claims that its military operation is an attempt to “denazify” Ukraine. Zelensky’s call with the umbrella body, which represents 50 American Jewish groups, was aimed at convincing the organisations to push world leaders to send more weapons for Ukrainians to fend off the Russian attack.

He went through the list of cities already overrun by Russian forces and warned that the situation would only deteriorate further without more forceful global intervention.

Zelensky, who invoked his own Jewishness during the call, again noted Russian strikes near areas of Jewish importance, including the site of the Babyn Yar mass murder during the Holocaust, and Uman, a sacred site to Chassidic Jews.

He also decried Putin’s demand that Ukraine concede totally and likened what is happening to the start of the Holocaust.

“For some reason, we have to kneel down and give our weapons away. We have to hoist the Russian flag. We are supposed to say that we don’t want anything, we want to put our hands up,” said Zelensky.

“Listen, all of this already happened. In Europe. All of this happened during Nazi times when the German army rolled through Europe and everyone gave the Jewish people away.”

Also joining the call was Kyiv’s ambassador to Washington Oksana Markarova, who urged the leaders to join Zelensky’s call for a no-fly zone over Ukraine – a demand that has until now been rejected by NATO as too drastic of a step that could lead to an all-out war.

Markarova invoked Golda Meir, the Israeli prime minister who was born in Kyiv. “It would be great to have her now with us,” she said. “I think she would help a lot in this great fight.”

The envoy also likened Russian military strikes in Ukraine to the rocket fire Israel endured in conflicts with Hamas and Hezbollah, saying that the Russian strikes were indiscriminate and hitting civilians.

“The majority of the strikes are from the air, and it’s something that again, you know, all brothers and sisters in Israel are, unfortunately, too familiar with,” said Markarova.