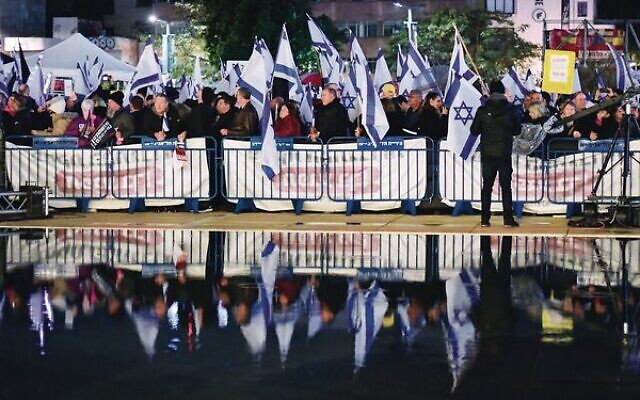 Protesters gather to rally against the Israeli government at Habima Square in Tel Aviv on January 14, 2023. Photo: Avhalom Sassoni/Flash90

The most heartbreaking social media post I read after the Israeli election was from a long-time Israel educator and campus activist. Although she ended her post quite beautifully with a hopeful appeal to Israel’s better angels, and reaffirming her own love for Israel and its people, the bulk of her post reflected a sense of despair. Her country – the place that she, every day, would talk to college students about as a place to be defended from demonisation – had just elected a horror show of a coalition, complete with racists, homophobes, inciters of violence and advocates for a Hungary-style illiberal regime with no restrictions on the government’s power.

As someone who spent much of my 20s in Britain defending Israel and Zionism on campus and the media, her post got me thinking. And I’ve thought more as the coalition has taken shape and fulfilled the worst fears of many of us; giving control of part of the West Bank to a racist annexationist, putting a Kahanist with multiple convictions for violence and incitement in charge of the police, and – worst of all – announcing a government bill to usher in what Elyakim Rubinstein, not unreasonably, refers to as a “democratic dictatorship”. Simply put: how can pro-Israel activists abroad defend this government?

And the answer of course, is that they do not have to.

The fight at universities and other liberal bastions in the West is a fight against the misrepresentation of Zionism as racism or imperialism, and against the antisemitic demonisation of Israel as a uniquely evil or human rights-abusing state.

Even with this new government, Israel is still not anywhere near the top of any list of the most oppressive or brutal states. Look around the rest of the Middle East. Look at Russia bombing and raping its way around Ukraine. China with its surveillance state and persecution of the Uyghurs, the prison state that is North Korea, several bloody dictatorships in Africa. You’d have to get through a long list of tyrannical regimes before you’d get to Bibi’s new coalition of wannabe authoritarians and theocrats.

So it should be both straightforward and entirely legitimate for pro-Israel activists to continue to stand up to ludicrous claims of Israel’s uniquely malignant influence in the world. And they can do so without having to sugarcoat the new government.

But the heart of anti-Israel animus is anti-Zionism. And here, activists not only do not have to defend the Israeli government, they should not.

I spent many years arguing against the accusation that Zionism equals racism; and that the very idea of a Jewish state is an illiberal, anti-democratic idea. And then along comes Netanyahu and establishes a government that actually seems to be based on the anti-Zionist depiction of Israel.

We actually have a party in the coalition – Otzma Yehudit – which agrees with this formula. Itamar Ben-Gvir’s party absolutely believes Zionism to be racism.

Modern Zionism was born as a distinctly liberal nationalist movement, (read Theodor Herzl’s vision of a Jewish state in his book Altneuland) and it established a liberal democratic state with its Declaration of Independence committed to “complete equality of social and political rights to all its inhabitants irrespective of religion, race or sex”.

Anti-Zionism was a core ideology of, successively, the Nazi-allied Palestinian leadership of Haj Amin al-Husseini, the Soviet Union, Arab dictators and Islamist terrorist groups (Hamas, Hizballah, etc.) or regimes (Iran). Historically, however inconvenient this fact is for today’s ‘progressives’, Zionism has been the ideology of liberals and democrats. Anti-Zionism has been the obsession of authoritarians and racists. And for me, those Israeli Jews whose version of Zionism is racist, illiberal and anti-democratic, belong in the anti-Zionist camp.

I want to be clear – I am not saying that every member of this coalition is an anti-Zionist. I would never deny that the Likud is a Zionist party, nor that many of its MKs are patriotic Zionist Israelis including Netanyahu. But, for the past few years – perhaps since his legal problems began – Netanyahu has pursued a personal agenda, identifying his own needs as indistinguishable from those of the state. And Likud MKs have been unwilling to prevent their party’s mutation into a personality cult, rather like Congressional Republicans in the Trump era, more out of fear for their positions than conviction.

As some notable rabbis have pointed out, the Religious Zionist Party does not represent the religious Zionism of old. It’s more Rav Kahane than Rav Kook, and, as a new biography points out, Meir Kahane abandoned Zionism in his later years, disgusted by its “veneration of democracy”.

Who do we have left in this motley crew? Ah yes, the Charedi parties. Non-Zionist by their own definition, they unashamedly pursue the needs of their community, even when those needs come at the expense of the rest of the country.

So, there really need be no contradiction whatsoever in defending Zionism while opposing this Israeli government.

In other words, it is indeed patriotic to protest your country’s actions in certain circumstances. And protest is assuredly patriotic when it is inspired not by this or that ideology, but by the founding values of the state.

Similarly, whatever the government and its supporters would have you believe, the mass demonstrations in Tel Aviv and elsewhere are not “left-wing” protests, they are Zionist protests.

And Israel’s friends and advocates abroad can likewise proclaim their Zionism by both fighting anti-Zionism in their countries, and by protesting Bibi’s new, illiberal government, which threatens founding values of the State of Israel.

Paul Gross is a Senior Fellow at the Menachem Begin Heritage Centre in Jerusalem. He wrote this article in a personal capacity. 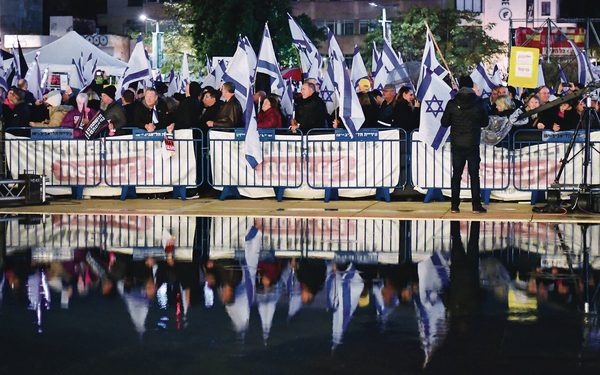 Protesters gather to rally against the Israeli government at Habima Square in Tel Aviv on January 14, 2023. Photo: Avshalom Sassoni/Flash90