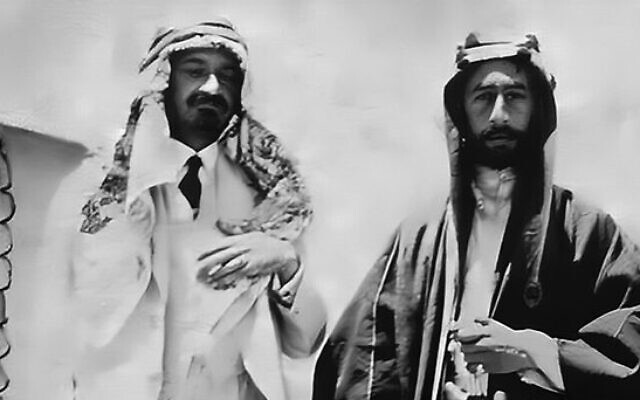 1066 was when William the Conqueror did what his name suggests – he conquered. England.

Interestingly, though not at all relevant to this piece, the other landmark year in English history was also a 66 … That’s 1966. The last time England won the Soccer World Cup.

But that’s by the by. What triggered this riff on significant years was a 100-year anniversary that fell just last weekend but which may well have passed many of you by.

It’s not surprising. After all, as Jews we’re inundated with anniversaries. A full calendar of yom tovs aside, we also mark International Holocaust Remembrance Day, Yom Hashoah, Yom Hazikaron, Yom Ha’atzmaut, Yom Yerushalayim and yahrzeits … not to mention countless other commemorations. Two weeks ago, for example, was 25 years since the Maccabiah Bridge Disaster, and then every so often there’ll be 10, 20 or 50 years since a war broke out, we suffered a major terrorist atrocity, or a legendary figure passed away.

2022 and 2023, however, are in a little league of their own. And league is the operative word here, but I’ll come back to that later.

For the moment, consider that next month is the 125th anniversary of the First Zionist Congress, held in Basel, where the father of modern Zionism Theodor Herzl subsequently wrote that he founded the Jewish state.

November, meanwhile, marks 75 years since the UN voted in favour of the partition plan and the creation of the State of Israel. And next May, we’ll be celebrating the 75th anniversary of the Declaration of Independence.

But 25 years after the First Zionist Congress and 25 years before the UN vote, on July 24, 1922, another major leap forward took place in the establishment of the Jewish State.

For it was on that date that the League of Nations, the Geneva-based forerunner of the United Nations, adopted the British Mandate for Palestine, with a view to establishing a Jewish homeland in the former Ottoman territory, as promised in the Balfour Declaration of 1917 and endorsed by the San Remo Conference of 1920.

In short, this was when the representative body of the international community officially recognised, and I quote, “the historical connection of the Jewish people with Palestine and … the grounds for reconstituting their national home in that country” and went on to hand Britain the responsibility of making it happen. Those who question Israel’s very legitimacy would be wise to take heed of this history.

For the record, the League also stated, “that nothing should be done which might prejudice the civil and religious rights of existing non-Jewish communities”.

Now it’s fair to say that the Arab world wasn’t particularly enamoured of the League’s decision and did everything in its power to prevent the creation of a Jewish state.

But what might surprise you is that just two or three years earlier, the principal leader of the post-First World War Arab world Emir Faisal, who had helped the Allies fight the Turks, was far from unsympathetic to the Zionist cause, and even signed an agreement with Chaim Weizmann expressing support for the Balfour Declaration, in return for which the Zionists would support the creation of a united Arab state and help develop its resources and economy.

The document noted “the racial kinship and ancient bonds existing between the Arabs and the Jewish people”, which all sounded very positive.

Sadly, Faisal’s desire for rapprochement with the Zionist movement was not shared by other players in the Arab world, and when his own aspirations for a kingdom based out of Syria were undermined when the French were handed the mandate for Syria and expelled him, the Faisal-Weizmann Agreement was dead in the water.

One hundred years on, one can’t help but wonder how differently the history of the modern Middle East might have played out if the British and French hadn’t been quite so keen to extend their respective empires, albeit under the guise of ‘mandates’.

While there would no doubt have still been unrest and opposition to a Jewish state, a figure like Faisal might at least have had the foresight to see the benefits it could bring to the region as a whole – in much the same way as a number of Arab leaders finally have in more recent years with the signing of the Abraham Accords.

It wasn’t to be though. But nonetheless, three years after the Faisal-Weizmann Agreement, exactly 100 years ago, the League of Nations gave its imprimatur to the resurrection of the Jewish homeland.

If, as Herzl said, Basel was where the Jewish State was founded 125 years ago next month, it was in Geneva a century ago last weekend that the world committed to making Herzl’s dream a reality.