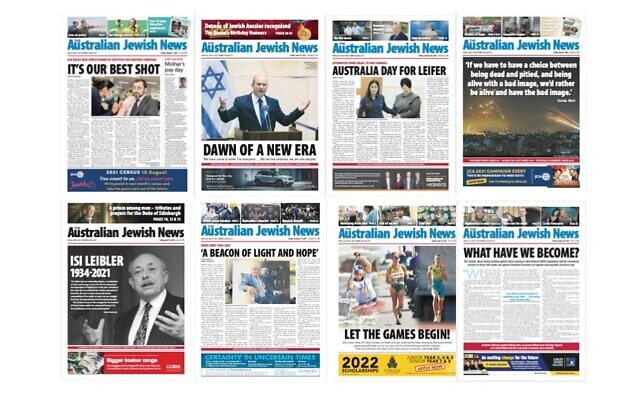 ● Over a decade since leaving Australia for Israel, former Adass Israel school principal Malka Leifer arrives back in the country to face 74 charges relating to child sex abuse at the school. Hours later, she appears by video link before a remand session of the Melbourne Magistrates’ Court. After a series of preliminary hearings throughout the year, her trial is set for 2022.

● Queensland Premier Annastacia Palaszczuk, whose Polish grandfather was interned in a Nazi concentration camp, condemns the sale of a Nazi flag at an auction on the Gold Coast.

● An Israeli intelligence expert debunks reports that Iran used freed Australian academic Kylie Moore-Gilbert in an attempt to lure her Israeli husband to a Tehran prison.

● At the Australian Open, Aslan Karatsev, a Russian-Israeli tennis player ranked 114 in the world, faces world number one Novak Djokovic. But the Israeli ultimately loses 6-3, 6-4, 6-2 in the semi final.

● Tensions boil over at the Jewish Community Council of Victoria (JCCV) as interim president Frank Greenstein is slammed for a president’s report avoiding any reference to the short-lived presidency of predecessor Andre Oboler, who had earlier told The AJN “the CSG [Community Security Group] were not happy with my presidency”.

● The Sydney Beth Din declares “an opportunity for real collaboration has been lost” after a NSW Jewish Board of Deputies working group formed to advise it on reform in the wake of contempt of court findings releases its report. The two organisations reconcile later in February, saying their discussions have been “very positive”.

● Recommendations delivered in a report by a Victorian Parliamentary committee include a ban on publicly displaying a Nazi swastika.

● Bondi Beach is defaced with swastika graffiti in what is described as a “reprehensible act of vandalism”.

● Communal concerns are raised as the ALP’s 2018 federal conference resolution calling on the next Labor government to recognise Palestine is elevated as a “statement in detail” in the party’s platform.

● Former Moriah College financial controller Gus Nosti is found guilty of having stolen more than $7 million from the school over more than a decade.

● Jewish Australians mourn the death of communal giant Isi Leibler, 86, who passed away in Jerusalem where he had been living since making aliyah in 1999. Tributes flow for Leibler, whose leadership positions included four terms as president of the Executive Council of Australian Jewry. He is praised for his visionary role in the 1980s to help gain freedom for Soviet Jewish Prisoners of Zion.

● Darren Bark is appointed as the new CEO of the NSW Jewish Board of Deputies.

● Mizrachi and Caulfield shules are criticised for inviting convicted US spy Jonathan Pollard to speak at a Yom Yerushalayim event they are co-hosting.

● Jewish Australians watch with rising concern as the latest conflagration between Israel and Gaza grows. With pro-Palestinian demonstrations in city centres across the country, differences emerge within the community about where to hold pro-Israel rallies, and how to balance media visibility and the personal safety of demonstrators.

● The ABC’s complaints process comes under fire after protests over a one-sided edition of Q&A on the Israel-Gaza conflict are brushed aside.

● The Sydney Jewish Museum receives $6.25 million from the NSW government to go towards a new three-storey education building and temporary exhibition spaces.

● The community is in mourning for Tzvi and Ingrid ‘Itty’ Ainsworth, who lived in Australia for nearly two decades and who had close family and friends here. The couple are among the dozens of residents tragically killed when an apartment block collapsed in Florida.

● Self-made businesswoman and philanthropic stalwart Millie Phillips passes away at the age of 92. Tributes describe her as “a passionate supporter of our community”.

● Speaking at an ECAJ forum, ALP leader Anthony Albanese condemns the anti-Israel boycott movement and apartheid slurs against Israel. But he fails to clarify whether Labor in power would recognise a Palestinian state.

● Kosher retailers in Melbourne and Sydney join a global protest over Ben & Jerry’s boycott of the West Bank, stating they will no longer sell the ice cream giant’s products.

● Tackling the deepening concern over the affordability of Jewish education in Melbourne, a discussion paper is produced by a working group of communal leaders and educators suggesting four options for the future of Jewish schools.

● Victorian Jews face a new round of Shabbats inside the four walls, as a sixth lockdown is announced.

● Rabbi Marcus Solomon becomes the first Orthodox rabbi to grace the bench of an Australian Supreme Court when appointed a judge of the Supreme Court of WA.

● Jewish Australians recall the September 11 attacks on the Twin Towers 20 years ago. Some were actually in the World Trade Centre or New York at the time.

● Communal leaders urge members of the community to follow lockdown rules as incidents of blatant breaches in Melbourne are splashed across the mainstream media prompting a spike in antisemitic sentiment.

● A last-ditch plea from dozens of Orthodox rabbis, including the Chief Rabbis of Israel and Russia, urging Premier Daniel Andrews to allow Victorian Jews to attend services over Yom Kippur is rejected by the Victorian government. But there is an exemption for outdoor shofar blowing, as in NSW, where 15-minute outdoor services on Yom Kippur are also permitted.

● Paralympian Matt Levy swims his way to a team gold medal and an individual bronze medal in Tokyo.

● Prime Minister Scott Morrison leads tributes to Shoah survivor and self-proclaimed “Happiest Man on Earth” Eddie Jaku, who passes away at the age of 101.

● The Australian government’s adoption of the International Holocaust Remembrance Alliance’s definition of antisemitism is welcomed by the mainstream communal leadership. But the Greens, New Israel Fund Australia and Australian Jewish Democratic Society speak out against its adoption fearing it will stifle criticism of Israel, even though the definition expressly states that criticism on a par with the kind that might be directed at other nations is not antisemitic.

● Communal leaders describe outgoing NSW Premier Gladys Berejiklian as “an incredibly warm friend” after she resigns amid a corruption probe.

● A new video emerges of a Hizb ut-Tahrir rally in Sydney, filmed during the May Gaza conflict, where the crowd chants “destroy the Jews”.

● After a rise in the number of Jewish Melburnians admitted to hospital with COVID, two unvaccinated community members tragically die – leading local experts to renew calls for people to get the jab.

● Rabbi Gersh Lazarow, senior rabbi of Melbourne’s Temple Beth Israel, stands down as the shule’s board and the Central Conference of American Rabbis conduct investigations into allegations he plagiarised sermons, drashes and articles over several years.

● Waverley Council in Sydney passes a motion to endorse the IHRA antisemitism definition, becoming the first council in Australia to do so.

● Incidents of antisemitism in Australia during the past year numbered 447, up more than a third on the same period in 2020, according to the Executive Council of Australian Jewry. The spike is attributed to Israel’s conflict with Hamas in May, and to high profile breaches of COVID restrictions by members of the community.

● The government announces that Hezbollah is to be banned in its entirety. There are calls for Hamas to also be proscribed in its entirety, particularly as a member of the terror group’s political wing was responsible for the death in Israel of Eli Kay, who had studied in Australia and had family here.

● Gus Lehrer steps down as president of the Sydney Jewish Museum after 11 years. He is replaced by Greg Shand.

● NSW Premier Dominic Perrottet announces the state government has endorsed the IHRA antisemitism definition, saying “to fight something, you need to be able to define it”.

● Benjamin Netanyahu claims Iran is behind the explosion that hit an Israeli-owned cargo ship in the Gulf of Oman.

● In a landmark decision, Israel’s High Court of Justice rules that people who convert to Judaism in Israel through the Reform and Conservative movements must be recognised as Jews for the purpose of the Law of Return, and are therefore entitled to Israeli citizenship.

● Jews join legions of others around the world paying tribute to the Duke of Edinburgh who died at the age of 99.

A supporter of Jewish and Israeli causes, he made a historic trip to Israel in 1994 when his mother, who is buried in Jerusalem, was declared a Righteous Among The Nations.

● Israel suffers the largest peacetime tragedy in its history when crowds of ultra-Orthodox worshippers are crushed on a slippery passageway after a 100,000-strong celebration of Lag B’Omer at Mount Meron. Forty-five people die and more than 150 are injured.

● Responding to Hamas rocket barrages, Israel stages air strikes in Gaza in their first major conflict since 2014. The impact on Israel domestically is even greater this time, with violence between Jews and Israeli Arabs breaking out in various cities. A ceasefire comes into effect on May 21.

● Israel forms a new government, the first without Likud and Netanyahu since 2009, after a broad coalition straddling virtually the full spectrum of Israeli parties agrees to a rotating prime ministership between Naftali Bennett of Yamina and Yair Lapid of Yesh Atid. The Arab Ra’am party is also included in the coalition.

● An estimated 3000 Americans turn out for a rally against antisemitism in Washington, DC.

● An Israeli military team assists in search-and-rescue operations after the deadly apartment tower collapse in Miami.

● After a drone attack on six ships in the Gulf of Oman, including a vessel with ties to Israel, PM Naftali Bennett warns Iran “can’t sit calmly in Tehran while igniting the entire Middle East – that’s over”.

● In the first high-level meeting in more than a decade, Israel’s Defence Minister Benny Gantz and Palestinian Authority President Mahmoud Abbas get together, but Israel downplays the likelihood that peace talks between Israel and the PA will resume anytime soon.

● US President Joe Biden emphasises his commitment to preventing Iran from attaining nuclear weapons, reiterating his administration’s willingness to rejoin the 2015 accord limiting the Islamic Republic’s nuclear program.

● Naftali Bennett announces that Mossad has embarked on wide-ranging efforts in search of information about Israeli pilot Ron Arad, missing in action since 1986. He was last known to be in the custody of Lebanese terror groups.

● Bestselling author Sally Rooney says she will not publish her latest novel with an Israeli publishing house because she supports a boycott of Israel.

● Israel will make its greatest contribution to the global war on climate change by leveraging the technological creativity and inventiveness of its people to find solutions “that have not yet even been imagined”, PM Naftali Bennett tells leaders at the COP26 climate conference in Glasgow.

● As talks on Iran’s nuclear buildup resume in Vienna, Israel’s Foreign Minister Yair Lapid, on a brief visit to Europe, emphasises to French President Emmanuel Macron and British Prime Minister Boris Johnson Israel’s position that sanctions on Iran must not be removed, and that only a credible military threat will stop Iran’s nuclear program.

● Naftali Bennett makes a historic trip to the United Arab Emirates, the first by an Israeli prime minister.