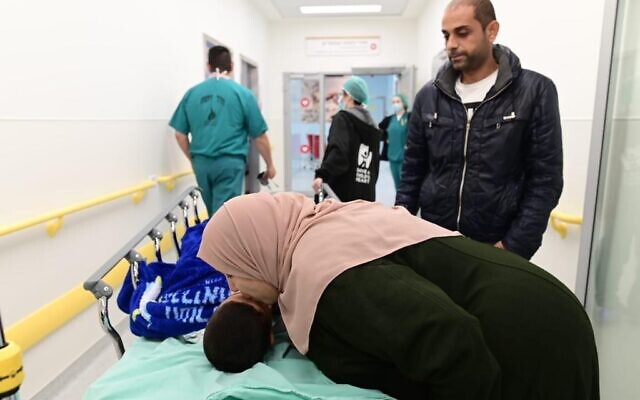 The grandmother of 5-year-old Gazan Amir Yichya Mabchuch kisses him on the head before he is taken in for open-heart surgery, at the Wolfson Medical Center in Holon. Photo: Tomer Noyberg/Save a Child's Heart

A 5-year-old boy from Gaza was brought on Sunday to the Wolfson Medical Center in Holon, where Israeli doctors performed open-heart surgery to save his life, making him the 3,000th child from the Palestinian territories to undergo such surgery in Israel as part of an Israeli NGO’s program.

Amir Yichya Mabchuch from Jabaliya, just north of Gaza City, was brought by Save a Child’s Heart, an Israeli NGO that, since its foundation in 1995, has helped more than 6,000 children travel from abroad with their families for critical operations.

The children have hailed from over 65 countries, most of which are in the developing world, and many of which have no diplomatic ties with Jerusalem.

Mabchuch was first diagnosed with a heart defect at two months of age. His mother, Maha, had brought him to be seen for a viral infection, when the family’s doctor spotted a blockage in one of the infant’s coronary arteries.

From the very beginning, “we understood that Amir would require an operation to fix the defect,” his mother said.

The child has not enjoyed a normal, carefree childhood. He has been unable to perform simple tasks and he has not been allowed to run around, or even walk for long periods, lest the exertion prove too much for his fragile heart. Instead, his entire life, he has been under constant medical supervision.

When Amir’s family found out about the option of getting him heart surgery in Israel during a check-up in Gaza, they jumped at the opportunity.

“When the doctors told us there was a possibility for Israeli doctors to carry out the complicated operation Amir needed, we were so happy. Everyone here in Gaza talks about how Israeli doctors are the most professional in the world and that they can be trusted completely,” Amir’s mother said. 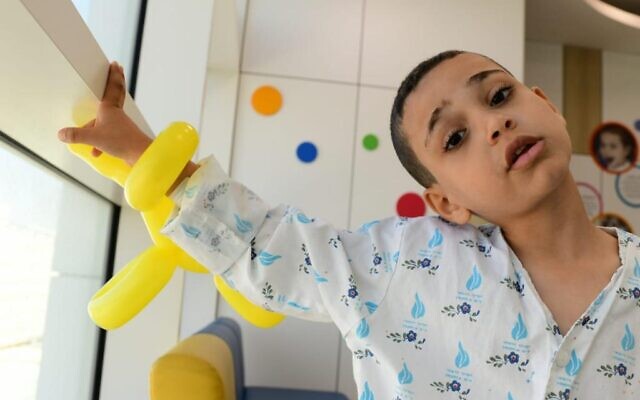 To bring Amir to Israel, Save a Child’s Heart submitted a request on his behalf and that of his family to permit them to enter Israel, while the family submitted a separate request with authorities in Gaza to exit the territory.

The vital heart surgeries reportedly continued apace even during the pandemic, though the number of Gazans permitted to enter Israel for medical care was drastically reduced, purportedly to prevent the spread of COVID-19.

Even before the pandemic, a significant proportion of requests to travel out of Gaza for medical treatment were either explicitly rejected or left unanswered, which meant that applicants could not travel to scheduled medical appointments.

According to the World Health Organisation, a body of the UN, in the year before the pandemic, about a third of the approximately 24,000 Gazans applying for permission, including hundreds with heart conditions, did not ultimately receive it.

Critics blame the dearth of adequate medical care in Gaza on the blockade imposed by Israel and Egypt, after the Hamas terror group seized control of the enclave in 2007.

Israel says the restrictions are intended to stop Hamas from bringing in weapons and materials to build fortifications, and that the blockade does allow for the import of medication and other medical or humanitarian items. Critics charge that the vetting process on shipments slows down supply chains and causes shortages. 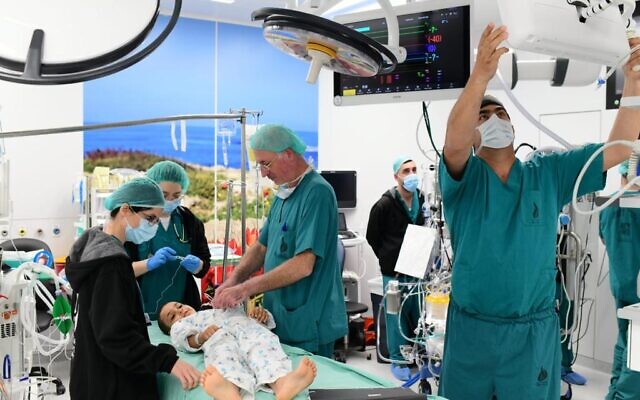 The operation that 5-year-old Amir received was complicated, requiring advanced technology that was unavailable in Gaza — and the surgery went off without a hitch, according to surgeon Hagi Dekel.

“The surgery was carried out in order to remove an obstruction in the left ventricle. Such an obstruction, if left untreated, can damage the valve, and in the worst-case scenario, cause sudden death… The aortic valve was opened, and the thick tissue obstructing the valve was successfully removed,” he said.

Deputy Director of Save a Child’s Heart Tamar Shapira said the work not only saves lives but also helps bridge the gap between Israelis and Palestinians.

“We have been saving the lives of Palestinian children for more than twenty years, and I always say that in addition to saving lives and giving hope to their families, we are also managing to build bridges between different peoples,” Shapira said.

The Mabchuch family members said they will return to Gaza with profound gratitude toward the Israelis who went out of their way to help Amir.

Just before the surgery, Amir’s mother said, “I know there is always tension between Gaza and Israel, but that doesn’t change my child’s story. I trust the Israeli doctors and I know they will save my boy’s life.”