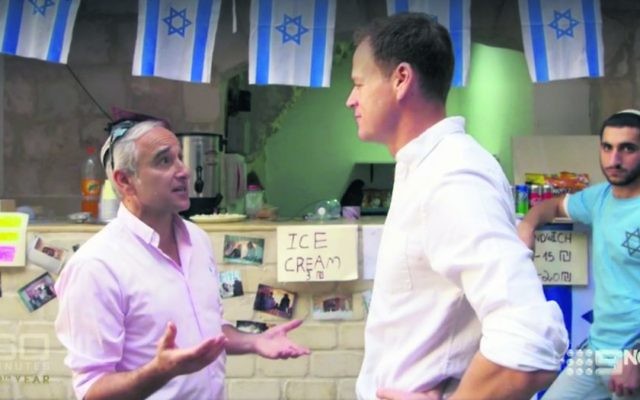 Daniel Luria (left) talking to Tom Steinfort at a shop he has set up in the Muslim Quarter of the Old City. Photo: Screengrab

DO you remember Halamish? I do. I remember those first horrific images as they came through to the world in the wake of the terror attack that occurred in the West Bank settlement last year.

I wish I could forget that picture of a blood-smeared kitchen floor. It was the scene that became the set of a savage stabbing spree at the hands of a Palestinian terrorist, where an Israeli father, his son and daughter died; a stark contrast from the peace that existed only moments before as the Solomon family sat together enjoying Shabbat dinner.

Horrendous and heartbreaking, it is just one example of Palestinian terror perpetrated against Israelis. And yet, it is a narrative omitted from 60 Minutes’ recent report, which attempts to explore the tensions that exist between Palestinians and Israeli settlers.

In fact, the report “Holy Real Estate” broadcast on Sunday evening was so imbalanced, not only failing to acknowledge the persistent threats of danger posed against Israelis in the West Bank, but also littered with a series of gross inaccuracies.

From the outset, reporter Tom Steinfort proclaims, “Just this week, Israeli troops killed scores of Palestinian Muslims protesting the relocation of the US embassy to Jerusalem.”

Wrong. Come on, Tom. Just a little bit of digging will reveal that the protests that occurred last Monday on the Gaza border were not in response to the embassy move. In fact, they have been a weekly occurrence for months.

Even Wafa, the Palestinian news agency, reported the launch of the protests in March, the “Great March of Return … against Israel’s refusal to allow refugees right of return to their pre-1948 homes.”
The Wafa article reads: “… The 46-day mass protests are expected to continue until May 15, which marks the 70th anniversary of the Nakba (catastrophe).”

The date was subsequently moved forward by 24 hours to capture the media attention already focused toward the embassy – reaffirming the commonplace manipulation of the worldwide media gaze by Palestinian propagandists, eagerly taken up by finger-pointing news outlets who neglect a little fact check.

Steinfort may or may not also be interested to know that 50 of the 62 “Palestinian Muslims” killed by Israeli troops were actually Hamas “martyrs”. Others were members of Islamic Jihad. The terror groups themselves have confirmed this. These were not passive protesters. They were terrorists, committed to the annihilation of Israel, intent on breaching the border with the aim of re-enacting the Halamish massacre or kidnapping innocent civilians. Note the social media directive on one Palestinian website urging followers to bring “a knife, a dagger or a gun”.

Aside from outright mistruths, the report was unequivocally biased against Israel. As journalists, we are only too aware of the impact of words. The use of emotionally charged language, hyperbole or the half-telling of truths, distorts fact, neglects balance, and features heavily throughout the report.

“Colonise”,”occupied territories”, and more of the usual rhetoric is thrown around with their obvious negative connotations – none more, than the charge that Israel is “much more serious, much more dangerous than apartheid”.

Yes, allegedly Israel, the country where Israeli Arabs have the same rights as Israeli Jews, where Arabs and Jews share the same buses, schools and hospitals, where they are elected to Israel’s parliament and serve as judges and members of the military, is an apartheid state. No. Not only is this just plainly wrong – this ill-formed comparison only trivialises the genuine suffering by those who did experience the reality of South African apartheid.

While the charge is made by the Australian lawyer, Gerard Horton, 60 Minutes made the decision to include his voice and this footage, to peddle the trajectory, and offer an inadequate counter perspective.

Alongside one Palestinian who says his business has been shut down and another who bemoans night-time raids by settlers – the two portrayed as victims – there are two Israeli voices offered in the report.

The first is by Australian oleh Daniel Luria, who has founded an organisation dedicated to purchasing Arab properties for Jewish possession. “Welcome to the Jewish land of Israel,” Luria shouts to passing onlookers in the Muslim Quarter. Political views aside, he is undeniably presented to be antagonistic, further underscored by him singing “The hills are alive with the sounds of Jews,” as he scales a Jerusalem rooftop. It is just cringeworthy. Luria is seen to be on the more extreme end of the spectrum; lacking nuance and unevenly matched against the moderate views offered on the Palestinian side.

The other Israeli is a mother living in Arab East Jerusalem despite the violence targeting her and her children. Juxtaposed against the Palestinian “victims”, they come across as zealots, with an air of divine smugness. God is on their side, so hang the consequences. Without any reasoned discussion of the political issues at hand, the countless attempts Israel has made to forge peace or the constant threats faced by Israeli civilians, there’s simply a viciously and dangerously skewed perspective of the Israeli mentality.

It is understandable that 60 Minutes would choose to present an Australian angle, but Luria to represent the Israeli perspective is questionable.

Speak to Arnold and Frimet Roth. Originally from Melbourne, the couple know too well the reality of the Israeli-Palestinian conflict – their daughter, Malki, was killed aged 15 in the Sbarro restaurant bombing during the Second Intifada.

Or speak to Danny Hakim, the Australian who founded the Budo for Peace organisation, which sets out to unite Israelis and Palestinians through martial arts. Just two of many examples.

Israel is not perfect, it’s true. No country is. But this brand of salacious journalism, infuriatingly common across mainstream media outlets is sloppy at best, and irresponsible and hatemongering at worst.

For the average Australian, who does not go out of their way to seek news beyond the mainstream media outlets, it paints an overly simplistic picture of a complex situation.

By using the terms “Israeli” and “Jew” interchangeably, the program is tarring one as the same, also dismissing disparity on the political scale. This has the potential to only exacerbate anti-Jewish and anti-Israel feeling in a world that hosts ever-increasing hostility to a nation and a people who simply wish to live in peace in their ancestral homeland.

REBECCA DAVIS is features editor of The AJN.