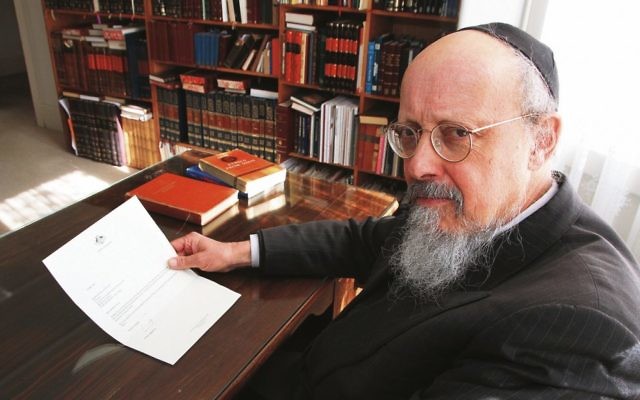 RABBI Shimon Cowen, director of the Institute for Judaism and Civilisation, has issued an apology for a comment he made at the Jewish Community Council of Victoria (JCCV)’s LGBTI Mental Health Forum last Monday night, in which he seemed to compare homosexuality with paedophilia, incest and theft.

Dozens of community members attended the gathering at which representatives from SANE Australia, Headspace, Jewish Care, Keshet Australia, the Rabbinical Council of Victoria (RCV) and Hatzolah all spoke about the problems members of the LGBTI community face, including discrimination, bullying, exclusion and abuse.

“It is most important at this time while the community is enduring a divisive and emotionally damaging same-sex marriage debate, that we focus on respect, inclusion and avoiding creative havoc with the mental health of vulnerable members of our community, in particular our LGBTI youth,” JCCV president Jennifer Huppert said.

However, during the meeting Rabbi Cowen while expressing his view that all people must be accepted and cared for, said that includes members of the gay community as well as people guilty of extreme misconduct, such as those who are paedophiles or commit incest.

The comment prompted some attendees to walk out and a storm of outrage on social media.

In the wake of the outcry, Rabbi Cowen issued a statement in which he said, “I am aware that a statement I made at the gathering is generating a lot of concern, and I want to apologise for any misunderstanding and offence it caused.

“The meeting discussed the issue of acceptance and inclusion of homosexual persons. I stated my understanding that we accept and care for all Jews – and indeed all people – because they are people, precious and made in the image of God. I went on to explain that one must be willing to exert oneself in this love and acceptance. Here I added extreme examples of misconduct, where the effort to love the person may be a difficult one.

“It was far from my intention to compare homosexual conduct to paedophilia or incest or anything else. Unfortunately, however, I was misunderstood to have compared them to homosexuality and this misunderstanding caused offence.”

He added that he “certainly did not mean to cause” any offence and that he was “sorry that I was not more careful to avoid that misunderstanding”.

This is not the first time that Rabbi Cowen has sparked outrage over his views on homosexuality. Just last year, in his book Homosexuality, Marriage and Society, he claimed homosexuality is a learned behaviour, possibly brought on by trauma, and that the children of homosexual couples may be subject to identity deprivation and inferior parenting.

He also wrote, “There are great numbers of homosexuals who … are aware of same-sex attraction as something that they do not want,” adding, “There is a vast spectrum of homosexuality and the majority of homosexuals can be helped.”

Referring to the Victorian Health Complaints Act that was passed last year, he lamented, “The homosexual is locked in by the ban on therapy, his or her destiny sealed.”