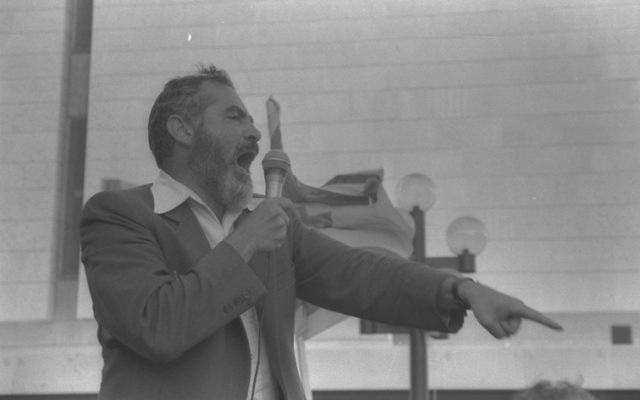 Meir Kahane addresses his followers during a demonstration in Jerusalem in 1984. Photo: Nati Harnik/GPO

THE Benjamin Netanyahu-brokered merger of Israel’s Jewish Home party with the far-right Jewish Power has been met with unanimous concern from Australia’s peak Jewish groups.

Known in Israel as Otzma Yehudit, the ultra-nationalist Jewish Power are followers of the late Rabbi Meir Kahane, who was banned from the Knesset in 1988 due to his racist views.

The party supports extending Israeli sovereignty throughout the West Bank and expelling Israeli Arabs it deems to be disloyal. It includes members who view Baruch Goldstein, who massacred 29 Palestinians worshipping at the Cave of the Patriarchs in 1994, as a hero.

Netanyahu has promised the merged party two ministries if he continues to govern after Israel’s April 9 election.

The Executive Council of Australian Jewry (ECAJ), the Australia/Israel & Jewish Affairs Council (AIJAC) and the Zionist Federation of Australia (ZFA) have all remarked that they would usually not comment on internal Israeli politics.

“However, we have never hesitated to speak out in support of Israel’s basic right to exist in peace and security, or against attempts to undermine Israel’s foundations as a Jewish and democratic State,” ECAJ said.

“We are therefore compelled to express our deep dismay that two mainstream Jewish political parties in Israel, Jewish Home and the National Union, recently announced an agreement encouraged by the Prime Minister to join forces with Otzma Yehudit, a party which is widely seen as extremist and racist.
“The unity ticket announced by the three parties is cynical and opportunistic, and a betrayal of fundamental Jewish and Zionist values.”

“For decades, AIJAC has consistently condemned and opposed Kahane and his followers – as we do the discriminatory and offensive beliefs now espoused by Otzma Yehudit,” he said.

“These are indeed reprehensible and inconsistent with the Jewish values and democratic ideals integral to Israel’s political and social character.”

ZFA president Jeremy Leibler said, “As a bastion of democracy in the Middle East, Israel’s Knesset has a proud history of promoting the rule of law, ­equality and freedom, irrespective of race, religion, gender or ethnicity.

“The ideology of Jewish Power is antithetical to these important values. Electoral gains should never justify sacrificing the very values underpinning the Jewish State that we, as Diaspora Jewry, are proud to support.”

Providing an analysis, ZFA honorary life member Ron Weiser, a scholar of Israeli politics, explained to The AJN that parties in Israel require 3.25 per cent of the vote to enter the Knesset.

“This way … one or two seats will come to Jewish Home and that will enable Netanyahu, under current calculations, to be the only person who can form government,” he said.

“Netanyahu was smart enough to make sure it wasn’t the Likud that joined with this extremist party. And Jewish Home were dumb enough to be able to be bribed with a promise of two ministries to make a deal with a party that most of its supporters would find an anathema.

“Bibi has been a great exponent of the art of politics, and politics is not a moral game.”

New Israel Fund executive director Liam Getreu said it was reassuring to see condemnation from across the political spectrum of Benjamin Netanyahu’s “pressure to bring Kahanists” into what he hopes will be his next coalition.

“But it’s also just the latest symptom of the mainstreaming in Israel of those who use racism, violence and terror in the name of Zionism,” he said.