Most people would know the story of Jacob and his 12 sons – the 12 tribes of Israel. Most people would also know that Jacob had a favourite, Joseph. Plagued with jealousy, his siblings try to kill Joseph by throwing him into a pit, and then selling him as a slave. After a series of events, including interpreting the dreams of those around him, Joseph finds himself the second most powerful man in Egypt – Pharaoh’s right-hand man.

In 1992, Joseph and the Amazing Technicolour Dreamcoat opened at the State Theatre in Melbourne, featuring Tina Arena as the narrator.

Thirty years later, the stage is set to technicolour-mode again, as the new reimagined production returns to Australia.

For Fijian-Australian singer and songwriter Paulini, who will be playing the narrator, the story cuts through all the noise of life today, showing that at the end of the day, to love and forgive is really all that matters.

“We love our family, but they’re not always our best friends,” Paulini told The AJN in between rehearsals. “I think it has so much to do with each and every person in their everyday lives and what we all go through and struggle with. But at the end of all of that, at the end of the trials and the difficulties that we go through every day, you have to always remember that love and forgiveness are big things that I think make you whole as a person. Without those things life gets very chaotic.” 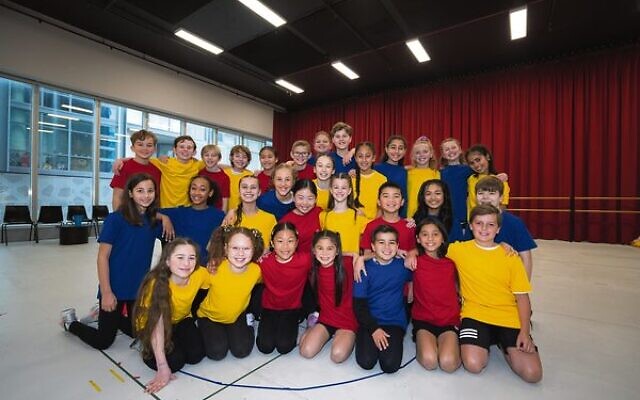 The children’s ensemble from Joseph and the Amazing Technicolour Dreamcoat.

Paulini, who rose to fame as a contestant on the first season of Australian Idol, said that while she vaguely knew the story of Joseph, thanks to her years in Sunday school as a child, she hadn’t experienced the musical before. At least, until her audition.

Thrown into the deep end, after performing a Whitney Houston song, Paulini was asked to sing Pharaoh’s Story on the spot.

“I don’t particularly read music so you can image the fear inside,” she laughed.

“But I wanted the role so badly. So, I said that if they could talk me through it and be patient with me, I’d do it.”

And clearly, she made an impression, because within a couple of months, she was told she had secured the part.

It’s the first time this production has been seen outside of the West End.

In 2019, Tim Rice and Andrew Lloyd Webber decided it was time to reinvent the family classic. It’s still told entirely through song with the help of the narrator, but Paulini says that while people will be familiar with the story and the show, things are a tad different this time around.

“I’m excited because it’s something that [audiences] haven’t seen,” she said, explaining that it’s exciting because it hasn’t been in Australia for such a long time. “Most people know the story of Joseph. It’s exciting coming back with a show that people are familiar with, but it’s a brand-new production.” Paulini explained that how the story is told, what people are doing on stage and even parts of the songs are slightly different.

“It’s fresh, it’s energetic, and it’s a new way of looking at an old production.”

She went on to explain that it was the score and the songs that really drew her into the story.

“Before I went into that audition, I listened to the soundtrack really quickly, and the songs are incredible. That really caught my attention. I fell in love with them, especially Pharaoh’s Story, I love that score,” she said. “And I love that the whole message in this musical is forgiveness and love. We all make mistakes, but, you know, in order to move on with our lives, you’ve got to forgive.”

Also, it’s highly energetic and something that the singer could challenge herself with.

Explaining rehearsals as “Everest”, Paulini confessed that she had never had formal training.

“It’s a massive challenge for me – singing, acting and dancing. I didn’t get any training for these. But I know at the end of the road, it’s going to be very fulfilling.”

“Most people know the story of Joseph. It’s exciting coming back with a show that people are familiar with, but it’s a brand-new production.”

It’s proof that with hard work, grit and determination, you can achieve your goals.

“I remember when I first started singing, I would be invited to opening nights of musicals, and I’d look at the stage and think there was no way I could do it. Hats off to the performers but it’s such a tough gig,” Paulini said. “There’s eight shows a week, all that dancing, acting and singing. I never in my wildest dreams thought I’d be here. But you have to work hard with what you have. You’ll grow along the way.”

Joseph and the Amazing Technicolour Dreamcoat was the first of Lloyd Webber and Rice’s musicals to be performed publicly. While it was first performed at a school concert, hilariously, it started garnering more attention following the success of Jesus Christ Superstar. It has since been performed hundreds of times in more than 80 countries worldwide.

A truly technicolour dream, Joseph brings a little bit of colour back into lives at a time when we’re searching for it most. And as Paulini puts it: “Everybody goes through bumps in their lives, but there’s always that hope, that light at the end of the tunnel. You just have to make a few good choices, and that’s to forgive, in order to love.”

Joseph and the Amazing Technicolour Dreamcoat is showing at Melbourne’s Regent Theatre from November 10 and at Sydney’s Capitol Theatre in February 2023. For tickets, visit josephthemusical.com.au