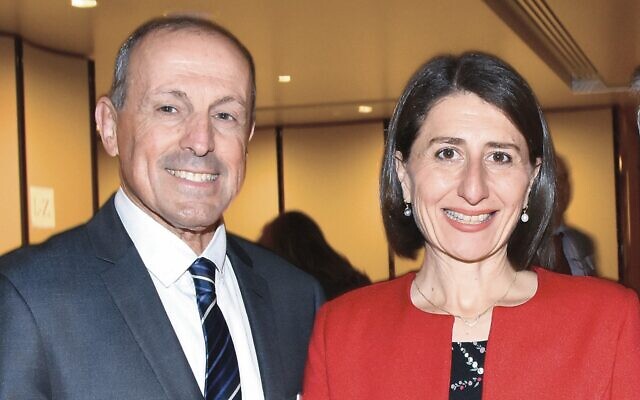 “A TREMENDOUS leader”, “a tireless worker for the Jewish community” and “one of the most outstanding communal professionals our community has been served by in recent memory”.

These are just some of the accolades directed at NSW Jewish Board of Deputies (JBOD) CEO Vic Alhadeff since he announced last week he will step down, relinquishing his full-time duties in the first half of 2021 once a successor has been found.

“Vic has been a dedicated and tireless leader and has substantially elevated the work of the Board and its status in the Jewish and general communities,” JBOD president Lesli Berger said.

NSW Premier Gladys Berejiklian said of Alhadeff, “His legacy for advocating for his community and for supporting inter-faith activities across NSW is unparalleled.”

#BREAKING After 16 years of service to the NSW Jewish Board of Deputies, CEO Vic Alhadeff has announced he is stepping…

Posted by The Australian Jewish News on Wednesday, October 21, 2020

“Vic is one of the great men of multiculturalism in Australia and one of our most recognisable and respected community leaders,” he said.

“He is forthright in putting his case – not only in calling out antisemitism and defending the State of Israel but also calling out hatred directed to other groups.”

Alhadeff told The AJN – where he worked for nine years as associate editor and nine as editor prior to joining JBOD – “It’s been a remarkably rich and rewarding 16 years” representing the NSW Jewish community.

He said “without question” the highlight of his tenure had been the successful campaign that resulted in Section 93Z of the Crimes Act, which makes it an offence to publicly threaten or incite violence on grounds of race, religious affiliation, sexual orientation, gender identity, intersex or HIV/AIDS status.

“The trigger for that was a speech on the streets of Sydney calling for death to the Jews. We realised this was a whole of society issue,” he said. “If you could stand in the middle of Martin Place and call for violence against any demographic … and the law did nothing, it put everyone at risk.”

JBOD led the Keep NSW Safe campaign, a coalition of 34 cultural and faith groups – with Alhadeff as spokesperson – to lobby for the change, which became law in June 2018.

Another point of pride, he said, was engaging with TAFE after the bullying of a Jewish student, resulting in the implementation of a 10-point protocol to combat racism and bullying.

Alhadeff said the mandate of JBOD “is the security of the community, or as I laconically say, making NSW a better place to be Jewish”.

This could mean tackling antisemitism in schools, ensuring university students don’t have exams on Yom Kippur, or ensuring Jews can walk around freely with a kippah, he clarified.

“I believe we live in the greatest and one of the most successful multicultural nations,” he said.

“That said … in the last two years we have responded to an alarming spike in antisemitic incidents. The work in that space has increased exponentially.”

Vic Alhadeff to step down from NSW Jewish Board of Deputies

After 16 years of service to the NSW Jewish Board of…

Posted by NSW Jewish Board of Deputies on Wednesday, October 21, 2020

“They have been an integral part of everything I have done and it’s important to share the credit,” he said.

On what drives him, Alhadeff cited the famous Woody Allen line, “80 per cent of success in life is just showing up,” the Pirkei Avot teaching, “It’s not up to you to complete the task but nor are you free to desist from it,” and Atticus Finch’s line in To Kill a Mockingbird, “You never really understand a person … until you climb inside his skin and walk around in it.”

“It’s something which I’ve carried subconsciously when engaging with MPs or people from other faith groups or other cultures,” Alhadeff said.

“It’s been so humbling, because so many of them have talked about the respect that they have felt in the way that I’ve dealt with them.”

Another reward has been feedback from young adults he has mentored.

“You can pick them, those who are going to go places,” he said.

“I love identifying young, bright minds and hopefully motivating them to get involved, make a difference.”

In what he called a positive arrangement, Alhadeff will remain JBOD CEO throughout the process to recruit his successor before moving into a consultancy role.

He said JBOD is in a good position with its recent injection of young adults “with a vast range of skills and backgrounds” coupled with “the corporate and communal wisdom” of past presidents.

As for his own destiny, Alhadeff said, “I certainly feel I have the tools to make a contribution and that’s certainly my intention. While obviously continuing to support the community in any way I can.

“I absolutely am open to and will welcome new challenges.”