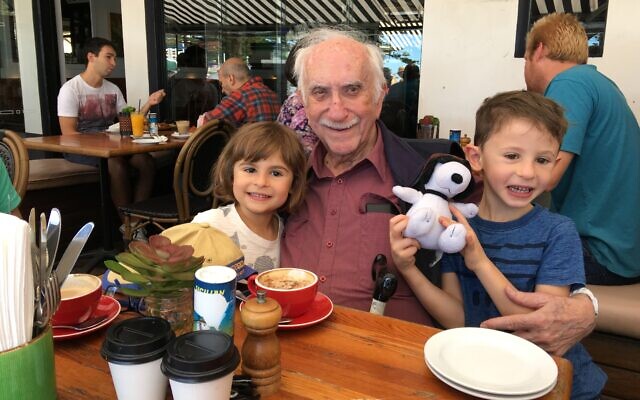 LAURIE Rosenblum, who passed away last week aged 95, has been described as a “dedicated champion of Queensland and Australian Jewry” for his more than 50 years of dedication to the community.

In addition to his 42 years as president, Johannesburg-born, Sydney-raised Rosenblum served as life member and life governor of the Queensland Jewish Board of Deputies (QJBD), pioneering many of the Sunshine State’s Jewish institutions. An avid Zionist, he made lasting connections with ambassadors and officials.

The World War II veteran stood up for Jewish rights, Indigenous rights and promoted dialogue with other faiths.

In addition to being the first person from outside Sydney or Melbourne to be made an honorary life member of the Executive Council of Australian Jewry (ECAJ), his efforts saw him awarded with a Medal of the Order of Australia (OAM) in 1991 and five Israeli State Medals.

“For more than 50 years Laurie was Queensland Jewry. He combated antisemitism like no other, fought vigorously against racial discrimination and did everything he could to ensure Jews across Australia had a loud and thoughtful voice,” he said. “He was a kind, thoughtful, quick-witted, articulate and collegiate gentleman who has left an enduring legacy for Queensland and Australia.”

Lamenting Rosenblum’s passing as “a great loss”, ECAJ deputy president Robert Goot said, “It was my great pleasure to have known and worked with Laurie Rosenblum since the 1970s. He was always a thoughtful, collegial and dedicated champion of Queensland and Australian Jewry,” he said.

The Australia/Israel & Jewish Affairs Council’s Jeremy Jones said, “He was someone who could talk with authority and from his own experiences about fighting racism, changing the attitudes of global religious movements towards Jews and Judaism and the best ways of maximising the opportunities for minorities to contribute to and benefit from multicultural Australia.”

A family member said they treasured the time and love Rosenblum, who loved nature and animals, had for the whole family – “full of wise advice, extensive knowledge and good humour”.

“The things that stood out most were his incredibly strong morals and ethics. He always fought for what he believed in, however big or small,” the family member said.

“He never judged people on their place in society and believed everyone should be given a fair go.

“He was always happy and optimistic … He was a very loving father and grandfather who had great pleasure in spoiling everyone and helping out whenever he could.”