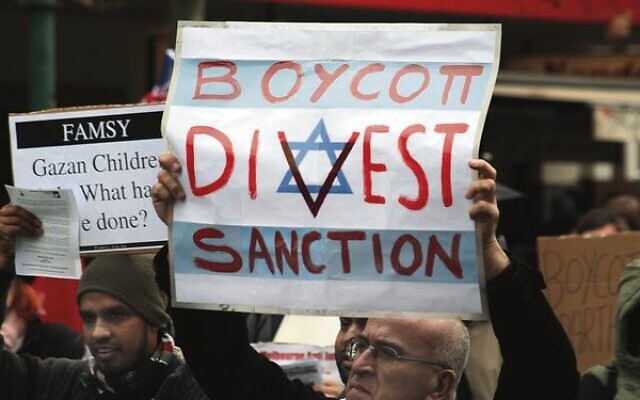 The University of Melbourne Student Union voted in favour of BDS last week.

The old saying goes that where you have two Jews you have three opinions. Within our own community, some lament “the alphabet soup” of communal organisations, a variety of acronyms all with their own roles and all vying to get their quotes in The AJN.

Not now though, not this week. Today, those acronyms speak with one clear voice to deliver one clear message: We stand with our students, we unite in the face of antisemitism, we will not allow myths and mistruths to fan the flames of bigotry.

In the week of Yom Hashoah, we watched aghast as the University of Melbourne Student Union (UMSU) branded Zionism as racism, accused Israel of ethnic cleansing and apartheid, and threw its support behind the BDS movement, calling for an academic boycott of the Jewish state.

While denying the Jewish people their right to self-determination, in a blatant display of discrimination and double standards, the UMSU resolution advocated for the Palestinian right to self-determination. Further, somewhat astoundingly, the resolution claimed to condemn all forms of antisemitism, when it quite clearly is antisemitic itself, according to the International Holocaust Remembrance Alliance Working Definition of Antisemitism – the most widely recognised and accepted definition of antisemitism within the international community.

In short, the purveyors of this racism are the same people who presume to tell us, the overwhelming majority of the Jewish people that they know better than we do what we find offensive.

That was in the week of Yom Hashoah.

On the day of Yom Ha’atzmaut, we stand as one to protest the prejudice, to urge the university’s leadership and the Victorian government to condemn the resolution and to do all in their power to ensure Jewish students feel safe and secure on campus, able to express their support for Israel without being subjected to verbal and physical abuse.

It is a call that has been echoed over the past few days by countless groups in our community. Indeed, our youth movements have also come together as one – across vast ideological, political and religious divides – to unite in unequivocal opposition to the motion.

It is a supreme irony that at a time when the historic enmity between Israel and its Arab neighbours is giving way to normalisation, the kind of rabid anti-Israel and antisemitic rhetoric we once heard from reactionary Arab autocrats is now being parroted by elements of the so-called progressive left in Western nations which have traditionally been Israel’s strongest supporters. Australia has unfortunately not been spared from this phenomenon, hence last week’s resolution.

The fact that the university is likely to take none of the action called for is beside the point. Like most of the activity of the boycott, divestment and sanctions movement, there is no genuine expectation the resolution will damage Israel’s economy. The real, intended, harm is to smear Israel before as wide an audience as possible.

The BDS supporters behind this resolution apparently could not care less that there is collateral damage to Jewish students. The Annual Report on Antisemitism in Australia published by the Executive Council of Australian Jewry has recorded a steady rise, year by year, in the number of antisemitic incidents, most notably in the number of complaints of harassment and bullying on campus.

The passing of the resolution has already been accompanied by an escalation in online abuse against Jewish students, and past experience has shown that this is invariably followed by real-world harassment.

As a community, it behoves us to unite behind, and support in every possible way, the determined – and tremendously praiseworthy – efforts of the Australasian Union of Jewish Students (AUJS) to nullify the effects of the resolution, and to engage with their allies within the student body. The resolution was only narrowly passed by 10 votes to 7, and it is a credit to AUJS that all of the ALP representatives on UMSU, both left and right, voted against it.

With the passing of the resolution, it is likely that other university student councils will follow suit. Our community will need to give AUJS every encouragement and support in facing down this threat, and do nothing to hinder AUJS’ efforts.

While the University of Melbourne cannot dictate policy to the Students Union, we welcome the leadership shown in its statement in which it is categorically stated, “Any form of antisemitism is antithetical to who we are and what we stand for. Tackling it and its damaging effects is a responsibility of all members of our community.” We also welcome the support expressed for Jewish students and for academic partnerships with Israeli universities and scholars.

Nonetheless, the ability of a handful of student activists to ram through racist resolutions also illustrates why there is an urgent need for universities to adopt the IHRA definition.

Ultimately, the culture of a university is determined by its leadership. A culture which permits antisemitism of the kind we have seen with this resolution should be anathema to any university with pride in its reputation. Adopting IHRA would send a signal that universities will not allow such a culture to become entrenched. A message must be sent that Jewish students have every reason to be proud of their identity and should not be forced to conceal it.

A hatred that goes ignored is a hatred that will flourish. And as we have seen in other Western democracies, antisemitism has been allowed to flourish for far too long by authorities ill-equipped at best and indifferent at worst.

We cannot allow that to occur on our campuses.