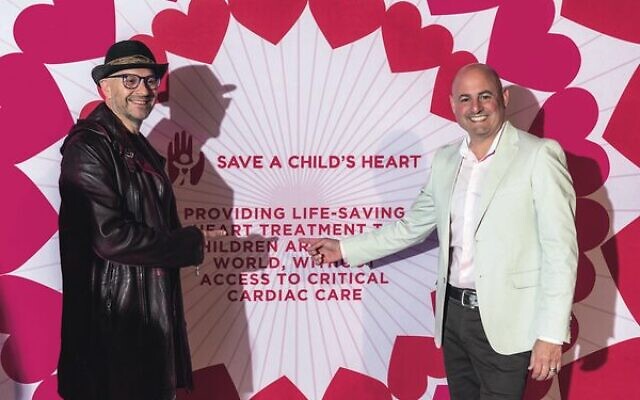 Around $700,000 was raised at this year’s Save a Child’s Heart (SACH) Valentine’s Gala in Melbourne recently.

Held together with Alex Waislitz and the Waislitz Foundation, it had been postponed due to COVID from its traditional Valentine’s date in February.

The event was attended by over 300 corporate and communal supporters from Melbourne and Sydney, eager to once again mingle with colleagues, peers and friends. They came to celebrate the opportunity to be together after what seemed so long, while supporting the life-saving work of SACH in Israel.

The event was co-hosted by the Canaccord Genuity Australia Foundation, with well-known and highly respected finance journalist Ross Greenwood generously donating his time to be the MC. The High Commissioner of Rwanda to Australia, Jean de Dieu Uwihanganye, was also in attendance.

“The event was another fantastic and meaningful evening of networking, live entertainment, followed by an afterparty with DJ and Afrobeats,” SACH CEO Doron Lazarus said.

“SACH are already looking forward to the next SACH Valentine’s Gala in February 2023.”

The $700,000 was raised from table sponsorship, donations, auction and raffles.

“These funds will go towards providing 38 life-saving heart surgeries for children from countries without access to the critical cardiac care they need to survive,” Lazarus said.

The children will be treated at the new SACH Children’s Hospital and International Paediatric Cardiac Centre in Holon, south of Tel Aviv.

This new centre will allow SACH to double capacity over the coming years and now has an entire floor dedicated to the treatment of Israeli children.

“Many of these children are from some of the most financially and socially challenged areas around Tel Aviv, who will now have access to the latest technology and the most highly skilled doctors available anywhere in Israel,” Lazarus said.

“Save a Child’s Heart is a wonderful example of humanity, proudly representing Israel on the world stage, helping to build stronger relationships with countries who are now establishing trade and diplomatic relations with Israel for the first time.”