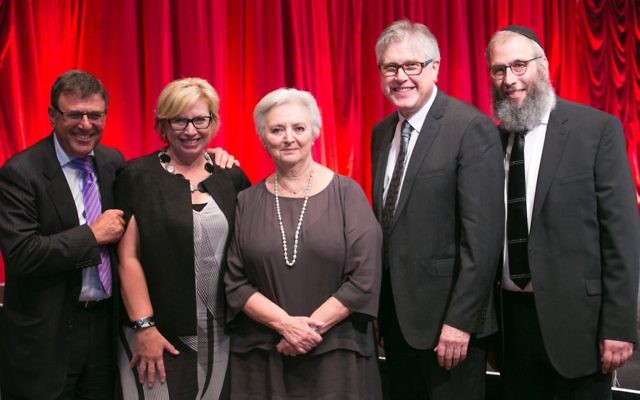 A RECORD amount was raised for Jewish House at the organisation’s annual gala dinner last week, with more than $300,000 to go towards the Bondi crisis centre, which supports the homeless and the disadvantaged, with a strong focus on families affected by domestic violence.

More than 800 guests attended the New York-themed dinner, which heard from domestic violence campaigner and the 2015 Australian of the Year Rosie Batty.

It was also announced on the night that Nora Goodridge had pledged a further $1 million to Jewish House, supporting its new child development and crisis support program, which will “make it as easy as possible for a child and their family to access the help they need for problems affecting their development, growth and wellbeing”.

NSW Attorney-General and Vaucluse MP Gabrielle Upton kicked off the live fundraising appeal with a $25,000 cheque from the NSW ­government.

Outlining the achievements of the past year and plans for the coming year, Jewish House CEO Rabbi Mendel Kastel said, “Our plans for next year are ambitious. We want to deliver contemporary programs, to push the boundaries in personalised, rapid, coordinated integrated services.”

He said Jewish House is tackling domestic violence “on many fronts and treating all members of a family affected” and, while it will continue to provide refuge for women and children who are being abused, the organisation is also trialling a new approach which allows women and children to remain safely in the family home “while we provide temporary accommodation to the perpetrators, to reduce the pressure and distress”.

“We will then also be looking to the Duluth Domestic Abuse Intervention Program, where we shift responsibility for safety from the victim to the community using one of the world’s most recognised behavioural change programs from the USA,” he added.

Stating that Jewish House is expanding its drug and alcohol programs with the implementation of the interventionist model, which brings together families and friends to assist and encourage rehabilitation, Rabbi Kastel said: “We will also create ­programs to provide the longer term supports to help people get off drugs and alcohol, and integrate them back into the community and [their] family.”