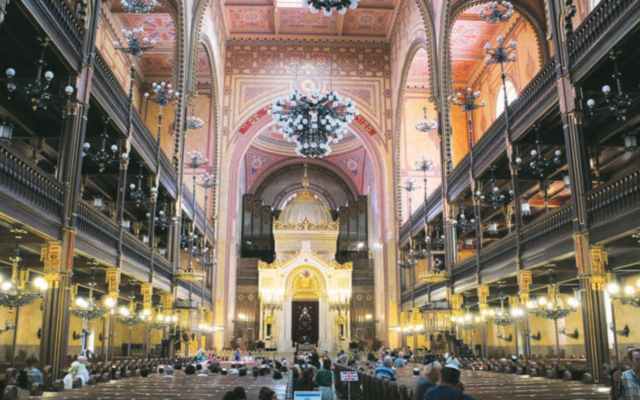 In June 2022, on the way to a conference in France, I spent a few days in Budapest. Not expecting much except for a pleasant few days in an interesting and historic city, I was greatly impressed.

It has the world’s third-largest parliamentary building, a 13th-century castle, one of the most popular pubs in all of Europe, and from a Jewish perspective, the second-largest synagogue in Europe, and the third-largest European Jewish community, behind the UK and France. It is also the birthplace of Janos Neumann (John von Neumann), who won a Nobel Prize for his invention that led to the creation of the personal computer, and the birthplace of Theodor Herzl. Moreover, it is where goulash, paprika, the Rubik’s cube and the ballpoint pen were all invented or created.

The impressive and very grand Dohany Street Synagogue, and a display of 60 pairs of steel sculpted shoes on the Danube Promenade commemorating the more than 10,000 Jews who were killed by the banks of the Danube, are on the top of all tourist list and suitably remarkable. But the city had a lot more to offer too, including wonderful thermal baths, great museums, lots of parks and historic sites, and more importantly, a lovely place for a short-stay stopover on the way to a seminar.

After the seminar, it coincided that the International Council of Christians and Jews (ICCJ) annual gathering was taking place in Frankfurt, where I was flying home from anyway, so as chair of the local branch of the Council of Christians and Jews, I extended my trip to stay on in Frankfurt for a few days. By contrast to Budapest, Frankfurt is a less appealing city with fewer attractions and historic sites, but I was there for a conference, so I made the most of my time.

The conference began with the awarding of the inaugural Seelisberg Prize – named after the town in Switzerland where the conference that led to the establishment of the ICCJ took place 75 years ago – and was presented to Professor Amy-Jill Levine, well known as a New Testament scholar. The prize will be presented annually to a person who has advanced the contribution of Jewish-Christian relations, and there is no doubt that Professor Levine was a worthy first recipient. She continues to teach the importance of the New Testament to Jews, and it was an honour to meet her.

Among the other delegates, there were people from over a dozen countries, and whilst most were in their 50s or significantly older, it was nice for me to be one of the younger delegates, though the youngest was a 24-year-old student from Jerusalem who is fascinated by interfaith relations. She and some of the other younger delegates brought a vibrancy to the conference that may otherwise have been missing.

On the first full day, we began by visiting a Jewish school in an imposing building in the middle of the city. It was built as a Jewish school but because of its size and position, was not destroyed during the war and was instead converted into a temporary hospital. Then it lay dormant for a couple of decades until it became a school again. Now it is a flourishing and very successful school, but whereas it used to be exclusively for Jewish students, now about 70 per cent of the students are Jewish and the rest are mostly Christian. The students were very inviting and knowledgeable, and gave us a great tour.

Later that day we visited a very unique aged care facility. Though named after two Jewish philanthropists, it was designed from the outset about a century ago as a facility for both Jewish and Christian residents. As such, there is both a synagogue and a church onsite, and the home employs a rabbi and two part-time Christian chaplains.

Much of the rest of the conference was taken up by discussions, debates and examinations of current events, texts and teaching techniques. On the one free afternoon, many of us visited the two Jewish museums in town, and also saw numerous churches and the large suburban synagogue.

On the final day, which I unfortunately missed, the delegation visited the cities of Worms and Heppenheim.

For me, attending the ICCJ conference and meeting all the delegates from around the world reinvigorated my passion for interfaith relations and reinforced my continued desire to ensure better understanding between all kinds of people who don’t necessarily see eye to eye.

While Frankfurt didn’t have the gloss or the allure of Budapest, what I experienced there as part of the conference had much of the same effect: it opened my eyes to a new perspective and gave me a glimpse into the kind of world that I want to see. I am so glad I was able to participate in this trip.

Alex Kats is chair of the Council of Christians and Jews (Victoria).