Michael Posner describes Leonard Cohen as “one of the towering cultural figures of our time”. While there have been other biographies written about Cohen, they’ve all left Posner wanting more.

“I felt there was more information, more stories and more insights to be had,” the Canadian journalist explained. So he set about interviewing hundreds of people on his mission to speak to anyone who knew the iconic singer-songwriter.

It’s a mammoth project, but one that Posner believes needed to be written. Throughout the process, Posner has been privy to information like never before.

“I heard so many interesting stories about him and many of them were completely new stories, and many of the people I interviewed had never spoken before about him or about their relationship with him,” he said. “There were lots of interesting revelations for me and I hope for readers.”

Cohen was often referred to as ‘the poet laureate of pessimism’, or ‘the godfather of gloom’, but he remains one of the greatest songwriters of the 20th century, if not of all time. His influence has spanned decades with many of his songs still enjoying playbacks and international fame.

Cohen’s musical career lasted nearly 50 years, with his final album, You Want it Darker, released mere weeks before his passing in 2016. 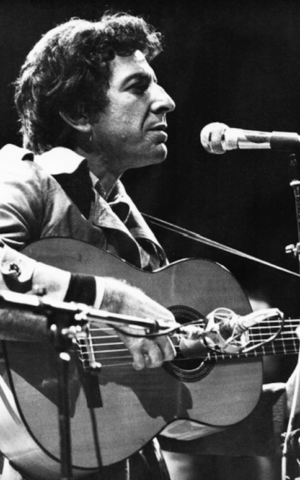 He was a reluctant pop star. But despite being in the public eye, there was much that wasn’t known about him. Which is exactly what Posner is revealing.

“A major part of the book is devoted to a woman never previously identified who had a six-year relationship with Cohen in the 1980s, and who was an influence on the song Hallelujah and the song Take this Waltz,” said Posner. “Theirs was a long and somewhat tortuous relationship with many positive elements, but one that ended with a tragic second-trimester abortion and considerable emotional pain for her. It’s always interesting to try to connect the life of the poet or writer to his or her work, and I think telling these stories can help us do that.”

A story in three parts

Posner has now released two volumes of the three-part biography. The first concluded with Cohen’s first major concert tour, aged 36. The second volume follows on from the end of the tour in 1971 to the late 1980s. Described as a challenging time for Cohen, with his personal life in chaos and his career in shambles, Cohen turned to Zen Buddhism to help him cope.

But what surprised Posner most of all about Cohen was his ability to maintain so many romantic liaisons simultaneously while at the same time remaining proactive as a songwriter and a poet.

Hallelujah, in fact, took 10 years to write. It’s something that resonates with Posner, who has been writing the oral biography since November 2016, starting the project soon after Cohen’s death.

He was a reluctant pop star. But despite being in the public eye, there was much that wasn’t known about him. Which is exactly what Posner is revealing.

“The challenge and fun of the work has been trying to find people who are still alive, had some involvement with Leonard, knew about events or certain moments in his life and could comment on them knowledgeably,” he told The Times of Israel last year when he released the first volume.

“Part of the challenge has been locating specific people who I knew were out there, but I didn’t know where, or whether they would talk to me if I found them.”

The biographies show the true Leonard Cohen, revealing what was really behind the public persona – the good and the ugly. Posner has spoken to so many people in Cohen’s world that he has become an expert on the musician.

“What I’ve learned is that I don’t want to reduce Cohen to a simple kind of binary character,” Posner told The Times of Israel.

He believes, though, that Cohen’s greatest love affair was with his work.

“I knew he had worked hard, but I had no idea exactly how hard.”

While Posner knows the three volumes will give a detailed insight into the man that Cohen was, he says it’s just the tip of the iceberg.

“I don’t think any biography, including these, can definitively encapsulate the life of someone like Cohen,” he said. “I hope they will make a contribution to our understanding of the man and his work, and of his essential complexity.”