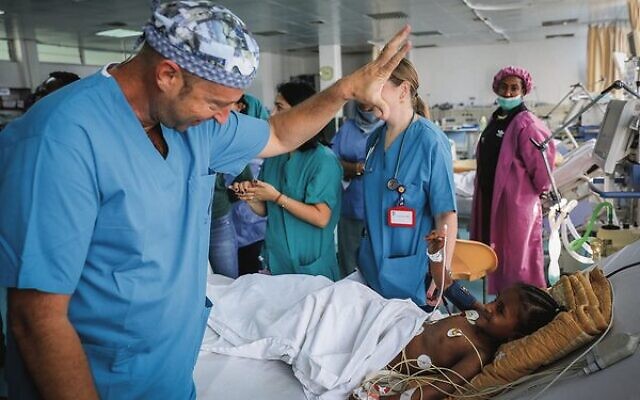 WORLD Heart Day, celebrated last week, focused on creating awareness about heart disease around the world and the role of organisations such as Save A Child’s Heart (SACH) in Israel.

SACH is a non-political, not-for-profit organisation based in Tel Aviv and is a story of humanity, building bridges and strengthening Israel.

The organisation provides life-saving heart treatment in Israel for children from countries and regions with little or no access to critical cardiac care. Most patients are from Africa, Gaza, the Palestinian Territories and neighbouring countries in the Middle East, with the rest from Eastern Europe, Asia and other places.

“While awareness of Save A Child’s Heart is growing here in Australia, I hope that many more members of our community learn about our life-saving work and feel rightly proud of an organisation that is a shining example of humanity, showcasing Israel to the world,” CEO Doron Lazarus told The AJN.

Now celebrating its 25th anniversary, SACH has provided life-saving treatment to almost 6000 children from around the world. The mission of the doctors and nurses is to treat children regardless of their origin, religion or financial status.

SACH has also provided scholarships to train almost 140 overseas medical personnel in Israel so that they are able to return home and treat children in their local communities.

SACH undertakes international medical missions to screen children who may require treatment locally if possible or in Israel if required.

Currently, the new SACH International Pediatric Cardiac Centre and Children’s Hospital is in the final stages of completion.

This state-of-the-art medical facility will be the largest of its kind in the Middle East, providing care to children from around the world. It also plays an important role for Israeli children from some of Tel Aviv’s most marginalised neighbourhoods.

It will have an entire floor dedicated to medical training. Utilising the latest in simulation technology and innovation, it will attract leaders in the field of paediatric cardiology, with an opportunity to advance paediatric cardiac medicine while showcasing Israel to the world.

SACH has also played its role in fostering diplomatic ties and building bridges long before formal ties. As witnessed in the Abraham Accords, it has been collaborating with countries such as the United Arab Emirates, Bahrain, Morocco and Sudan.

SACH has often managed to bring patients from countries that do not, or did not, have diplomatic relations with Israel.